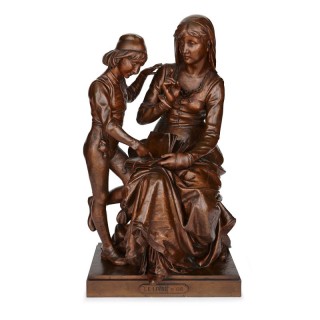 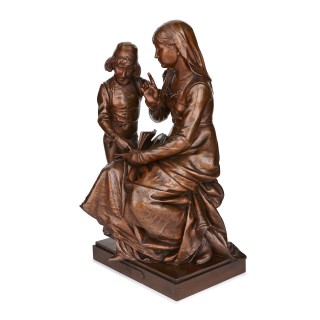 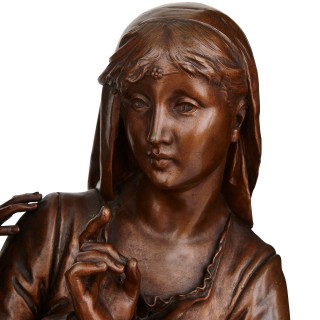 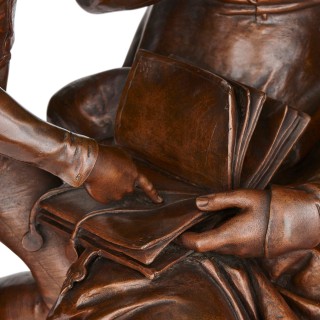 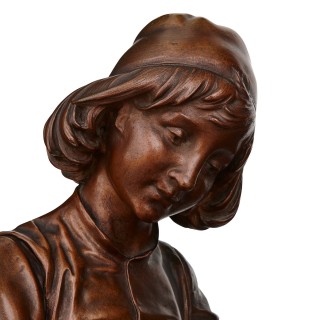 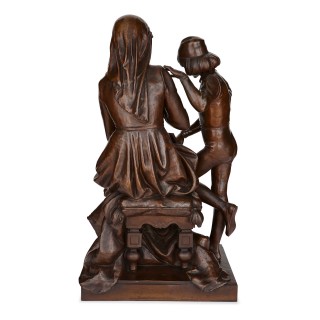 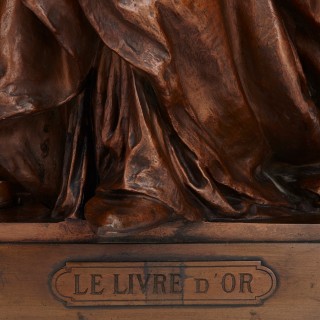 This beautiful sculpture of a mother and child was created in c.1900 by the French sculptor, Vincent Desire Faure de Brousse. Faure de Brousse was an exceptionally talented artist who specialised in bronze, figurative sculptures, crafted in the Italian Renaissance style. He was well-respected as a sculptor, and was regularly selected to exhibit at the Salon in Paris in the late 19th Century.

The patinated bronze sculpture depicts a seated woman and a young boy, who stands beside her. The intimacy of their poses — the boy leans his knee against the woman and touches her shoulder, while she reads to him — suggests that the pair are mother and child. The mother has a serious expression on her face, and she looks away into the near distance. She raises her right hand, in a gesture that implies that she is reinforcing a point, and in her left she holds a book open on her lap. The boy looks down, with a faint smile on his face, and points with his right hand to a passage in the text. The book may be a religious text, specifically the Bible, or some other text that offers moral guidance, which the mother wishes to impart on her son. It is also possible the text is a storybook, or something else light-hearted.

This sculpture captures a moment of tenderness, of maternal love and support. The scene has been rendered in beautiful detail, with great attention paid to recording the facial expressions and individual folds of drapery on the figures’ clothing.

The bronze is fitted with a title plaque, ‘Le Livre D’Or’, which translates as ‘The Golden Book’, and the base is signed ‘Faure de Brousse’.