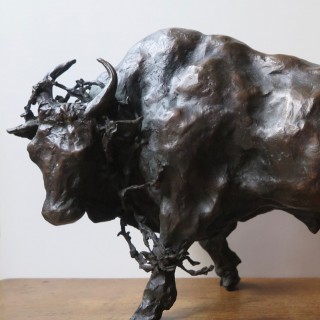 Bronze. Signed and inscribed with edition number 9 of 10.

Sold directly on behalf of the artist.
Lissa Borkowski studied at Camberwell, gaining her diploma in 1970. She was awarded the prestigious PRIX DE ROME in graphics enabling her to study in Italy for two years. In 1971 she won the GLEICHEN AWARD from the British Society of Sculptors for outstanding work by a female sculptor. A defining feature of her work is her ability to understand the musculature animals and to express their strength with maximum economy . Her skill was recognised by the Society of Equestrian Artists where she was awarded the British Sporting Art Prize.