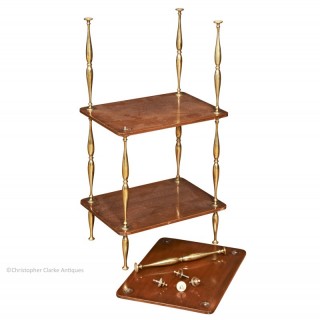 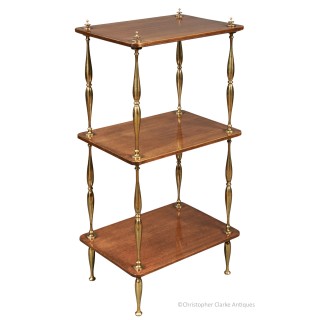 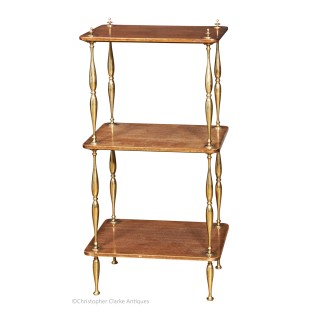 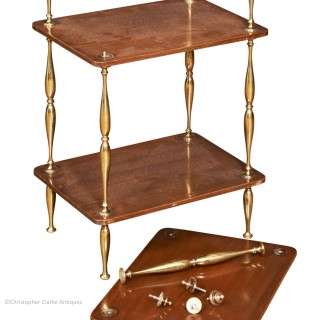 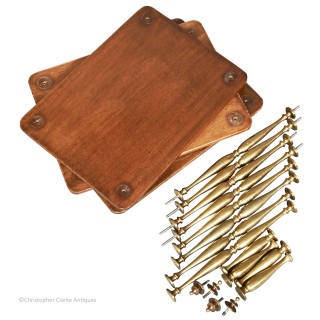 A small walnut Campaign Whatnot with cast brass pillars.

The breakdown principals of this Whatnot or Etagere are the same as a number of pieces of campaign furniture made throughout the 19th century; washstands and shelves being the most common examples. The boards are separated by brass pillars that screw into each to fix their position. This piece is unusual for its smaller size and the brass columns, which are normally plain tubes or rods stepped to the ends. The cast brass of these pillars has a more ornate, decorative shape, likewise the finial to the top board. The legs, although short, are taller than those on a washstand or the two other Whatnots we have seen, which normally have a shelf low to the ground. The boards are also chamfered to the underside.

It is difficult to be sure of the origin of this Whatnot; the grain of the walnut is not obviously English or French. The brass pillars and finials are more ornate and might point to it being French. It is unlikely to have been made by a workshop specialising in campaign furniture which muddies the water on attribution. What is sure though is that it is an uncommon, practical piece of portable furniture of a useful size. Early to mid 19th Century.