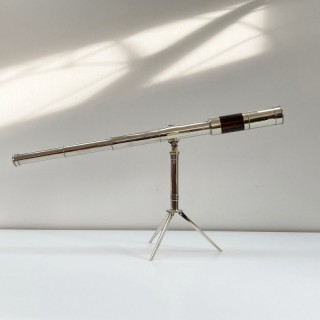 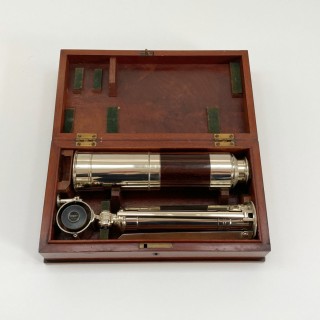 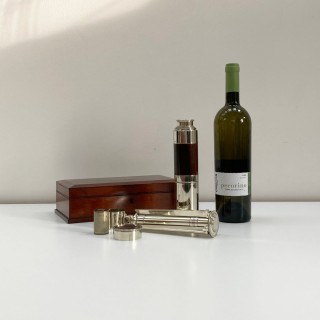 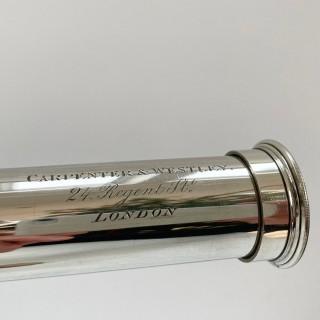 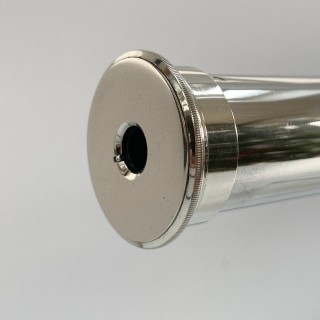 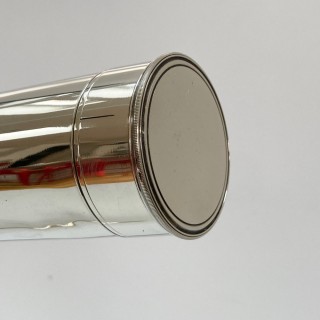 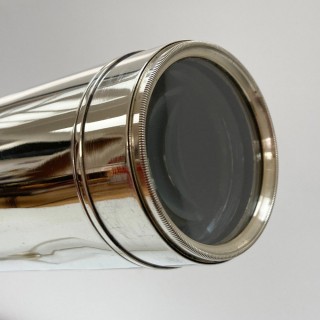 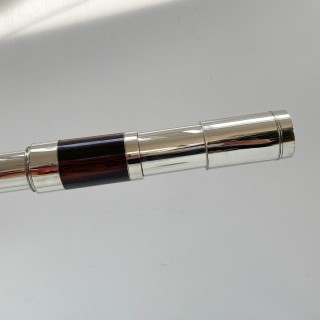 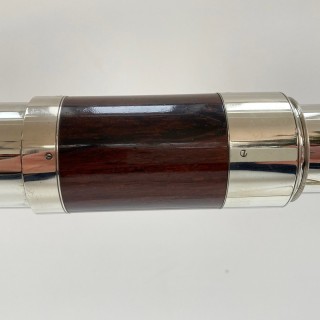 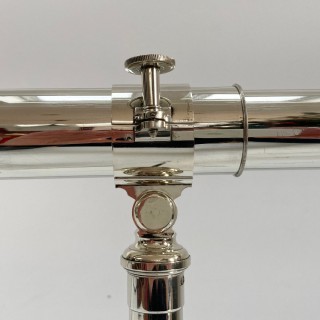 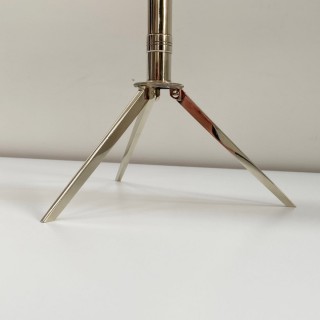 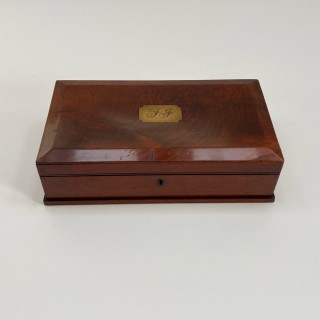 For sale, an early Victorian nickel plated and rosewood telescope on stand with fitted mahogany case by Carpenter & Westley of 24 Regent Street, London.

This top quality example is comprised of a four drawer nickel plated telescope with a figured rosewood barrel and extending sunshade. The telescope measures 77cms extended, 21cms when closed and has a one and a half inch objective lens. It has a dustslide to the eyetube and also retains its original lens cap.

The two part telescope tripod is provided with a rotating, hinged circular collar to the top which clasps the telescope barrel by means of a knurled screw to one side. The shaft is also finished with a threaded base onto which the tripod legs are screwed. This ingenious design allows the legs to be splayed outwards for use and then screwed back onto the shaft upside down for packing.

Both pieces are contained in a richly figured mahogany case with fitted interior and brass cartouche to the lid. It also contains a secondary eyetube lens to allow variation in magnification according to the user’s requirements.

The firm of Carpenter & Westley has its origins with Philip Carpenter of Birmingham who began trading in 1808 as an optician. Little is known of his training but his talent for producing lenses is firmly evidenced by the 1817 commission from Sir David Brewster to build his iconic kaleidoscope. Although the widespread popularity of this device led to Carpenter having to agree to relinquish sole manufacture of this device, by 1821 he had also devised his “Improved Phantasmagoria Magic Lantern” which proved equally popular.

His meteoric success allowed Carpenter to take up premises in London’s Regent Street in 1826 and he began to specialise in the production of microscopes. The instrument had gained widespread popularity and from 1827, his shop contained an exhibition named, “The Microcosm: A Grand Display of the Wonders of Nature” intended to entice the general public into the purchase of microscopes. His physical advertising was also combined with pamphlets which outlined his developments in microscopy which are still eagerly referenced by collectors to this day however, Carpenter’s fame was cut short in 1833 by his early death.

With a hugely successful business remaining, Carpenter’s sister Mary took over the firm alongside her husband William Westley who had previously worked for Carpenter as his apprentice and foreman and it was finally renamed to Carpenter & Westley in 1835 whereupon it traded successfully for the rest of the Nineteenth Century.

The Carpenter & Westley business finally closed in 1914 at the beginning of The Great War.

A simply stunning travelling telescope on stand set which remains in superb condition. One of the best I have seen for some time.