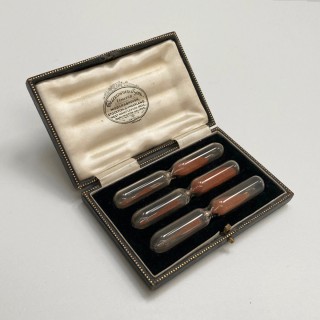 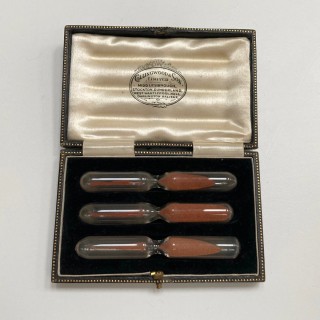 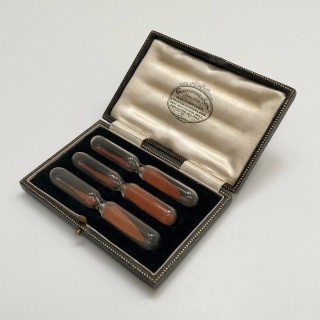 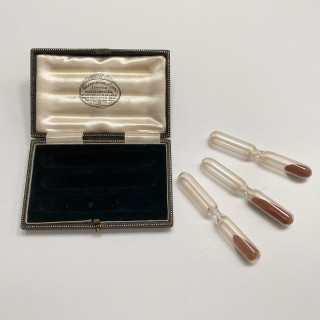 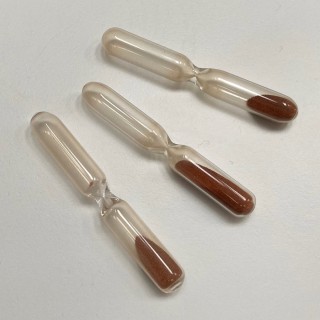 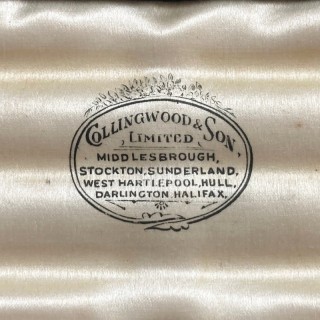 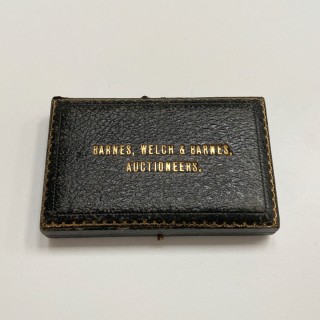 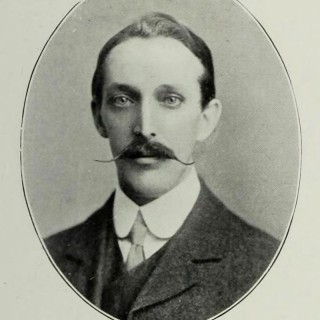 For sale, an early Twentieth Century set of sand timers in leather case by Collingwood & Son of Middlesborough.

All three are presented in a fitted case with push catch opener, black velvet and silk interior and a leather covered exterior with gilt tooling to the edges and the name of the owner to the top, Barnes, Welch & Barnes Auctioneers.

The business of Collingwood was formed in 1855 by the clockmaker, Matthew George Collingwood in Middlesborough. The company is perhaps better known as a jeweller though and numerous examples of their silverware and electroplate can still be found on the market. Their success is perhaps best reflected by the huge numbers of additional branches that were opened around the North East of England during their years of trading and Collingwood himself eventually going on to become the Mayor of Middlesborough in 1890.

With the founder’s death in 1892, his finely named son, Horatio Nelson Collingwood continued the business and in 1899 the company’s mark was registered at The Assay Office. It was incorporated as a limited company in 1909 and it continued with family involvement until Horatio’s death in 1949. The company finally closed its doors in the 1960’s.

The original purchasers of this super piece were the Estate Agents and Auctioneers, Barnes, Welch & Barnes of Sunderland, the auctioneering element of the business perhaps giving some indication of the meaning of the set. The firm was established in 1868 by George Barnes who would later become an Alderman and (in similarity to Collingwood), also the Mayor of Sunderland for the year 1888-1889. Presumably the second Barnes in the name was the son of the founder, with a Thomas James Welch also joining the firm in the final years of the Nineteenth Century. By 1906, the twenty eight year old Welch was the only remaining partner in the business and like the founder, was involved in numerous committees and boards associated with the town. (An image of Welch has been provided). Newspaper records show that the firm continued to trade until at least the mid 1930’s but I suspect the onset of World War Two or Welch reaching retirement age, was the reason for a lack of any further records thereafter.

This set can be fairly succinctly dated to a twenty year period between 1909 when Collingwood became a Limited Company (see the lid markings) and the demise of Barnes, Welch & Barnes in the 1930’s A very rare and interesting presentation set of one hundred year old sand timers.