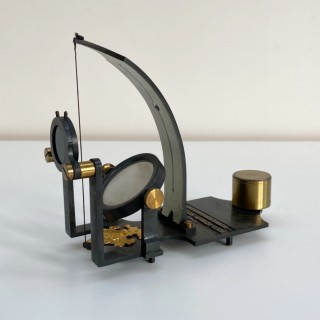 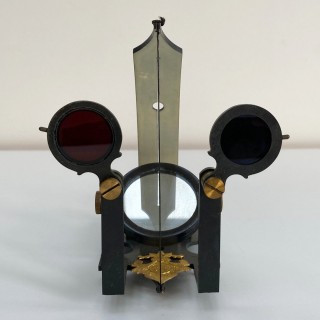 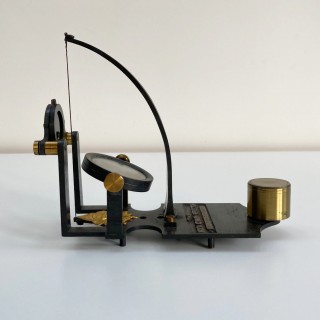 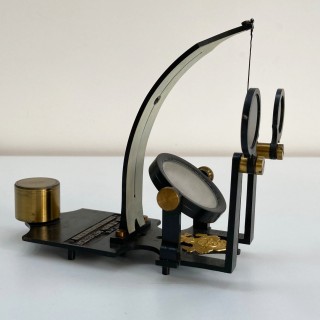 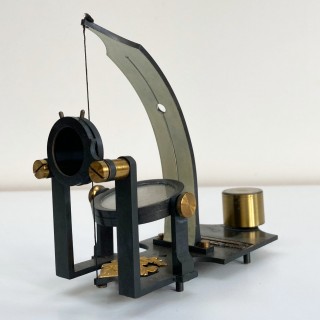 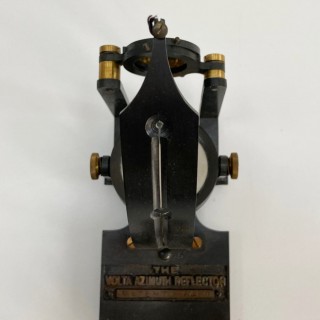 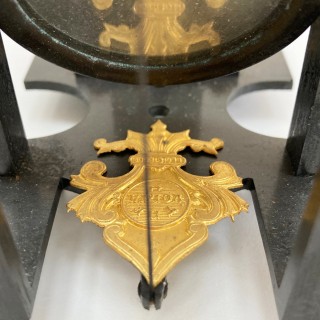 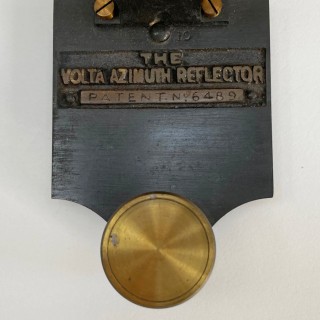 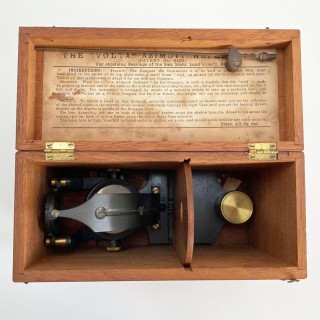 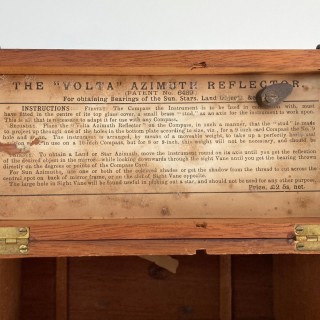 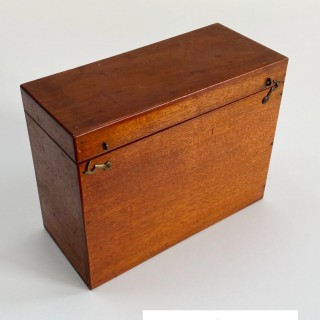 Unusually named given its association with the study of electricity, this interesting navigational device was intended for plotting ships courses in combination with a compass.

The method of using the instrument is described on a paper label pasted within the lid as follows:

For obtaining bearing of the sun, stars, land objects, etc.

Instructions: Firstly, the compass the instrument is to be used in conjunction with, must have fotted in the centre of its top glass cover, a small brass “stud” as an axis for the instrument to work upon. This is all that is necessary to adapt it for use with any compass.

Secondly, place the “Volta Azimuth Reflector” on the compass, in such a manner, that the “stud” is made to project up through one of the holes in the bottom plate according to size, viz for a nine inch card compass the No:9 hole and so on. The instrument is arranged by means of a moveable weight, to take up a perfectly horizontal position when in use on a ten inch compass, but for eight or nine inch, this weight will not be necessary and should be removed.

Thirdly, to obtain a land or star azimuth, move the instrument round on its axis until you get the reflection of the desired object in the mirror – while looking down through the sight Vane until you get the bearing thrown directly on the degrees or points of the compass card.

For sun azimuths, use one or both of the coloured shades or get the shadow from the thread to cut across the central spot on the back of the mirror frame, or on the slot of the sight vane opposite.

The large hole in the sight vane will be found useful in picking out a star, and should not be used for any other purposes.”

A somewhat scarce instrument, other examples that are extant, bear the name of the London nautical instrument makers, Reynolds & Son (patentees & sole manufacturers). This one is unmarked but the manufacture is precisely the same, suggesting that it may be an earlier example.

The company of Reynolds & Son are largely undocumented, they are considered to have been established by 1854 and traded from 14 London Street, Fenchurch, London. Evidently successful, their trade cards described themselves as compass adjusters, patentees & manufacturers of specialties in nautical instruments. They became a limited company in 1909 and seem to have weathered the hardships of the First World War. During the 1930’s, they finally merged with the equally renowned, John Lilley & Son and ten years later, the new firm was finally renamed to Lilley & Gillie. The latter company still exists as a manufacturer of marine instruments.