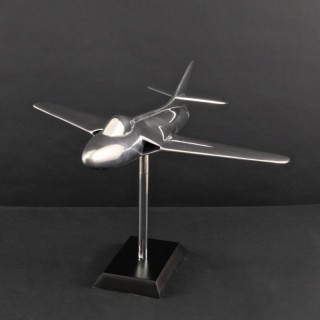 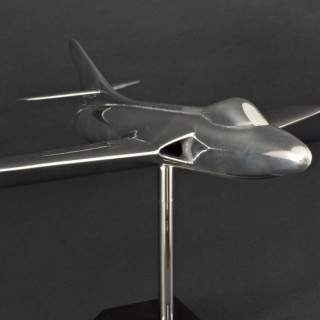 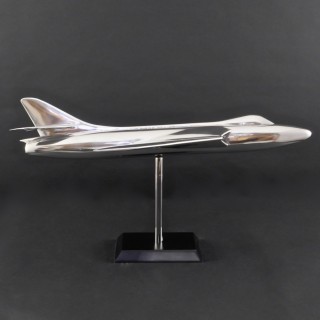 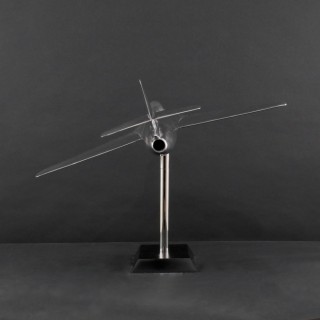 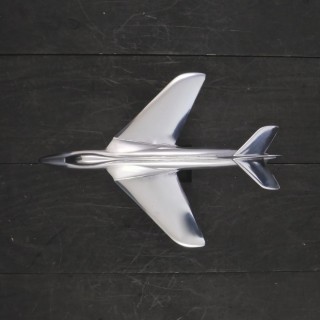 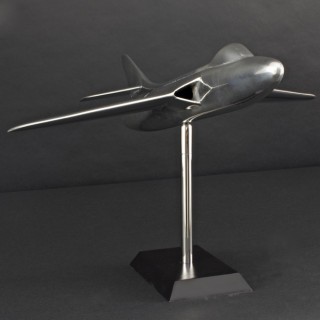 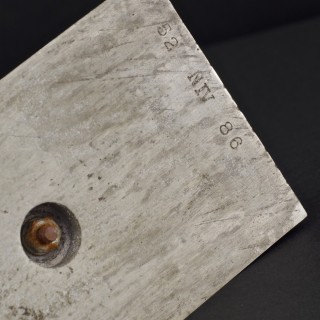 Wonderful cast aluminium scale model of a Hawker Hunter fighter jet on original stand, made for the Air Ministry in the 1950s. The aircraft was originally painted, but the condition of the finish was beyond restoration so it has been stripped and polished. The Hunter first entered service with the Royal Air Force in 1954 as an interceptor aircraft. It was the first jet aircraft produced by Hawker for the RAF. Successively improved variants of the type were produced and the Hunter set numerous aviation records, including absolute speed records. During the 1960s, following the decision for the supersonic English Electric Lightning to take over the main interceptor role, the Hunter showed it’s versatility and transitioned to being operated as a fighter-bomber and for aerial reconnaissance missions, using dedicated variants for these purposes. Hunters were also used by two RAF squadron display teams: the “Black Arrows” from 111 squadron and later, the “Blue Diamonds”, from 92 squadron. The Black arrows most memorable feat was the execution of a record-breaking loop of 22 Hunters in formation in 1958. This was a new world record for the greatest number of aircraft looped in formation, and remains unbroken to this day! The Hunter also served with many overseas air forces, Hawker had created perhaps one of the UK’s greatest defence export successes; no less than 21 countries operated the Hunter. Two-seat variants remained in use for training and secondary roles with the RAF and the Royal Navy until the early 1990s. Sixty years after its original introduction it was still in active service, being operated by the Lebanese Air Force until 2014. The Hunter saw combat service in a range of conflicts with several operators, including the Suez Crisis, the Aden Emergency, the Sino-Indian War, the Indo-Pakistani War of 1965, the Indo-Pakistani War of 1971, the Rhodesian Bush War, the Second Congo War, the Six-Day War, the War of Attrition, the Yom Kippur War, and the 2007 Lebanon conflict. My favourite story of the Hunter is when in 1968, which was the RAF’s 50th birthday, the top brass did not see fit to mark this event with any flypast, choosing instead for mere parades on the ground. Many RAF personnel were less than impressed and one Flt Lt Alan Pollock of 1(F) Squadron decided to mark the occasion in style – first with toilet-roll bombing missions against rival squadrons, and then on April 5th, while suffering from the beginnings of pneumonia, which no doubt had some affect on his decision making processes(!), he flew his Hunter over London performing unauthorised low flying over several London landmarks and at the last second deciding to fly under the top span of Tower Bridge! Knowing of the consequences of his unauthorised trip, he proceeded to ‘beatup’ several airfields and landed to meet his fate.