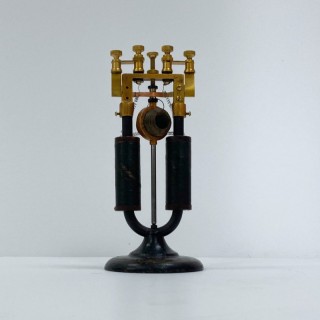 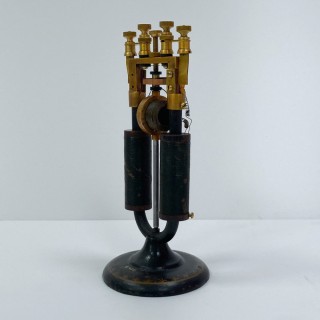 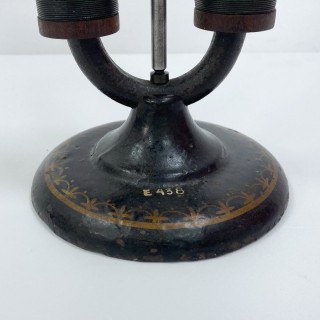 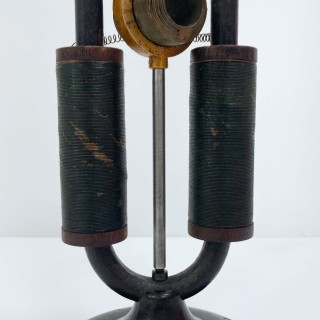 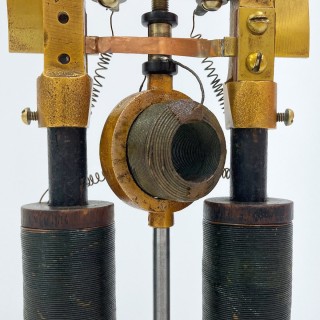 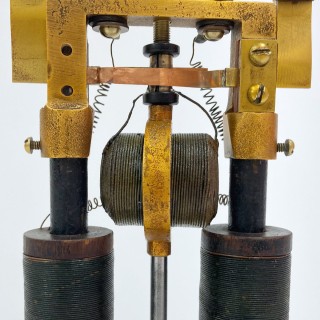 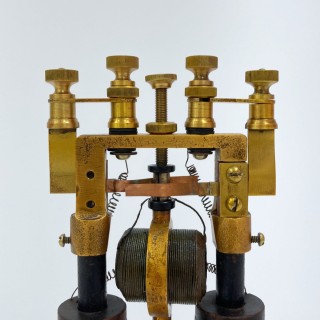 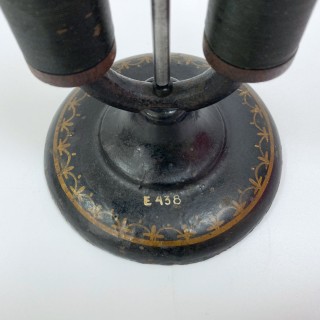 Various examples of these early instruments are wonderfully described in Davis’s Manual of Magnetism, by the famous Boston instrument maker (Daniel Davis Jr) who worked directly with Page. This particular instrument is described as “Page’s Revolving Ring” but is essentially an electromagnetic motor.

In differentiation from the Davis example which uses a steel magnet, this instrument consists of U form electro-magnet, essentially an iron bar with insulated copper wires wrapped around each arm to create the same magnetic effect. The rest is essentially the same with a circular copper wire ring placed on a revolving vertical axis between the magnetic poles and electrical connection points which can still be connected by means of a 9V battery to demonstrate the instrument.

This early electric motor differed from most that had gone before due to the inclusion of what Page called a “pole changer”. It consists of two semi circular pieces of silver fixed on opposite sides of the axis of the vertical shaft which are insulated from one another, a wire is also soldered from each side to the wires forming the central ring. Two thin copper strips are further applied to either side of the pole changer which are required to convey the battery current.

It’s action is described by Davis as follows:

“The polarity of the ring is reversed twice in each revolution by means of a contrivance of Dr Page’s called a Pole-Changer.

On placing the ring with its axis at right angles to the plane of the poles, and making connection with a battery, one extremity of the axis, or in other word, one face of the coil, will acquire northern polarity, and the other south polarity; the action of the magnet will now cause it to move round a quarter of a circle in one direction or the other according to the course of the current, so as to bring the poles between those of the magnet. In this position it would remain, were it not that as soon as it reaches it, the pole changer, which is carried round with it, presents each of its segments to that stationary copper strip which was before in contact with the opposite segment. By this movement, and as the ring passes on is immediately renewed in the contrary direction, thus reversing the polarity. Each end of the axis being now repelled by the magnetic pole which previously attracted it, the coil turns half way round so as to present its opposite faces to the poles. At this point the direction of the current is again reversed, causing the motion to be continued in the same direction; thus producing a rapid revolution.”

Charles Grafton Page was perhaps as influential in the development of electromagnetism and telegraphy as Michael Faraday. Born in 1812, the son of a sea captain, he studied medicine at Harvard and began experimenting with electricity whilst running a medical practice during the 1830’s. Page was responsible for numerous patents of his own throughout his career and by 1840, he took up a position in the US Patent Office where he remained until 1860.

Page was noted more for his contribution to the US patent process during his lifetime and his contribution to science is less well known due to the destruction of many of his experimental apparatus during the American Civil War but his experiments reproduced by Daniel Davis Jr, his experiments on electromagnetic locomotion and what Page termed at the time as “galvanic music” which produced electro acoustic sound and predated telephony have later cemented his name in the development of numerous technologies that are commonplace today.

This very rare and early example of an electro-magnetic motor bears great similarity to other extant examples of the work of Benjamin Pike Jr of New York. Pike Jr traded from 1831 to 1863 and given Page’s active dates, this instrument dates to circa 1850 but more importantly, remains in good working order. A fine example from the dawn of the electrical age!