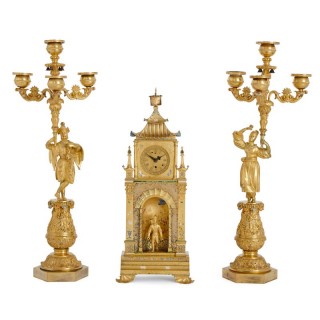 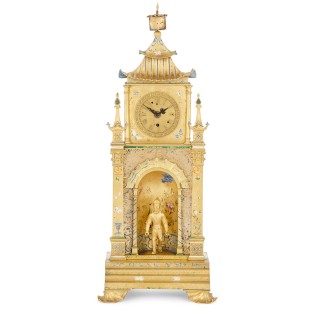 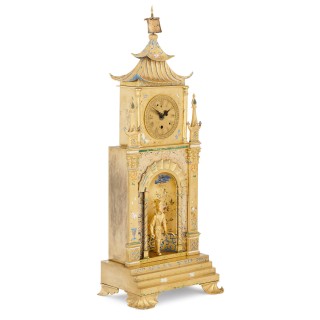 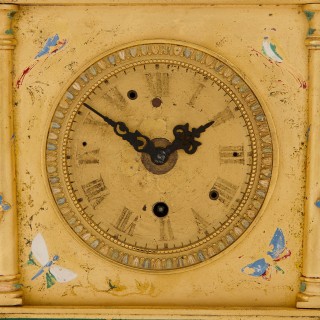 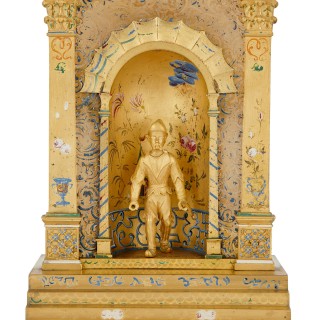 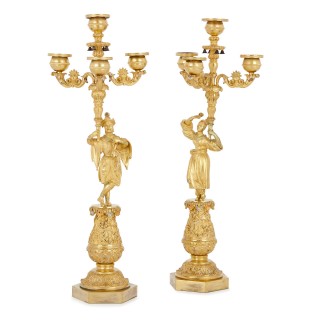 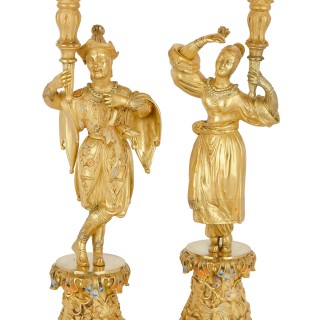 This clock set is designed in a wonderful ‘Chinoiserie’ style. This style was inspired by the art of China, and it was very fashionable in Europe in the 18th and 19th Centuries. The clock set is comprised of a mantel clock and a pair of candelabra. The items have been crafted from bronze, which has been gilt and cold painted with colourful stylised foliage, flora, birds and dragonflies.

The mantel clock takes the form of a Chinese pavilion, with a two-tiered roof crowned by a banner finial. The clock dial is positioned at the centre of a cuboid case, and is flanked by engaged columns. This dial features Roman Numerals and is set within a milled bezel. The case is supported on a tall rectangular body, with an aedicule on its front. A sculpture of a Chinese male warrior, with bow in hand, stands in the aedicule. The front of the clock’s body features two Corinthian pilasters, which are topped by pointed pinnacles. The clock is set on a banded rectangular base, which stands on four fanned feet.

This mantel clock has been matched with a pair of similarly designed candelabra. Each candelabrum supports four candle-holders on arms decorated with stylised palmettes and bells. The candelabra are held by Chinese figures, one male and one female. Both figures are depicted with smiling expressions and in traditional costume. The man clasps the neck of a bird in his free hand, while the woman holds a bunch of flowers. The figures stand on baluster-shaped stems which are heavily decorated with relief work, depicting flowers, plants, animals and geometric patterns. These are set on hexagonal bases.