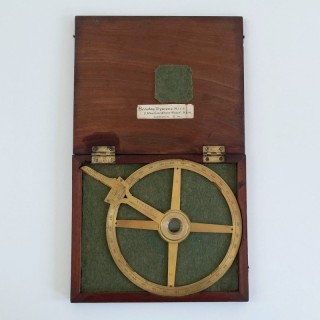 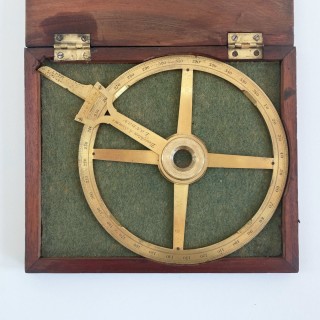 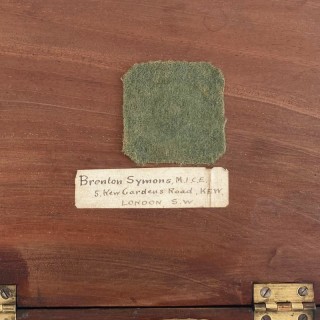 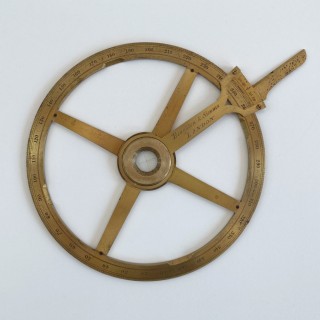 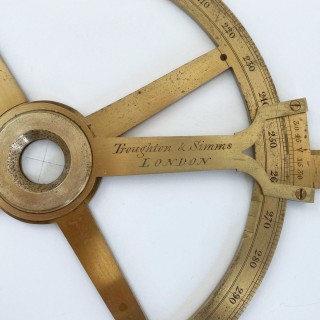 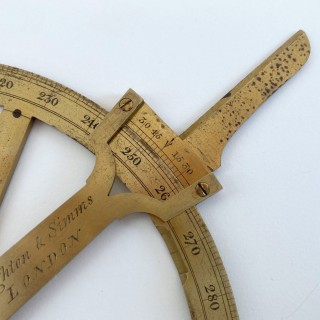 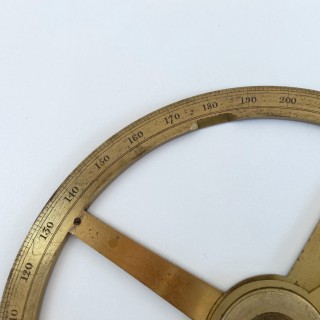 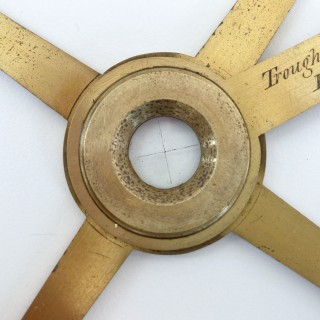 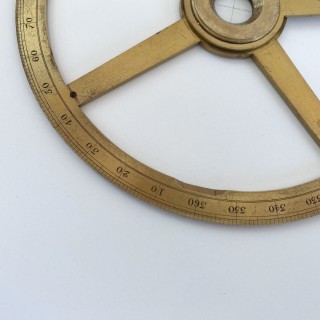 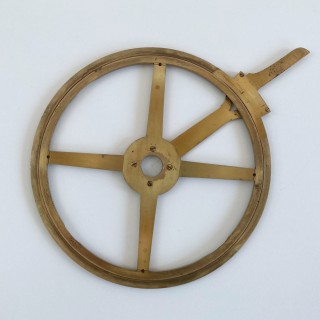 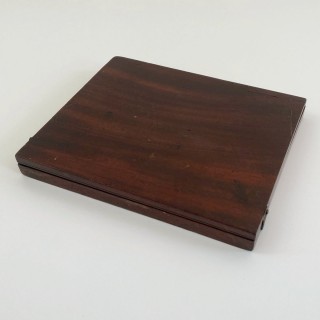 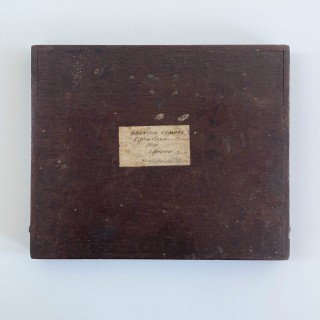 Constructed from brass, the protractor is engraved as you would expect with divisions for 360 degrees with four central struts on the inner circumference which hold a central circle equipped with a piece of glass with a cross hair for accurate placement on a map.

A central and moveable protractor arm is also attached to the top with a Vernier scale to allow detailed measurements to the nearest minute of arc. The arm is beautifully engraved to the makers, Troughton & Simms.

The instrument is complete with it original fitted mahogany case with original green baise interior. It also includes a label with the owners details. Brenton Symons M.I.C.E. (Mechanical Institute of Engineers) and his address of 5 Kew Gardens Road, Kew, London. S.W.

The base has a similar sticker which provides the same information with the inclusion of the word “inglaterra” suggesting that it was labelled for a trip to a Spanish speaking country.

William Brenton Symons was born in Redruth, Cornwall in 1832 and was educated at Truro Grammar School. Following in his Father Robert’s footsteps, William was trained as a surveyor and engineer. Up until the 1860’s, he seems to have been largely based in Cornwall working for the mining industry in producing land and mineral surveys. In 1863, he published a map of the Caradon & Ludcott Mining District and also an accompanying book entitled, “The History & Progress of Mining in the Caradon and Liskeard Districts”.

During the first half of the decade he is also known to have visited both Wales and Wicklow in Ireland where a series of articles on the Wicklow Mining District were published through the Irish Industrial Magazine.

In 1866, Brenton Symons took the position of civil engineer with the Chontales Mining Company in Nicaragua, his departure probably coinciding with the financial crash of the same year. He remained there for two years and then took a position as Managing Director of the Servian Copper Mining & Smelting company.

Brenton Symons continued to publish survey maps throughout his life and in 1884 also published several books relating to mining subjects, including, “A Sketch of the Geology of Cornwall and The Genesis of Rocks & Ores. He died in Surrey in 1917.

The inclusion of the Inglaterra on the case of the instrument strongly suggests that Brenton Symons carried this instrument with him to Nicaragua during his employment there. This allows a good opportunity to date this instrument’s production to 1866 or before.

The Troughton family of scientific instrument makers were prolific and highly respected manufacturers from the mid eighteen century. Edward Troughton was trading on his own by 1804 and was responsible for considerably expanding the Troughton’s reputation for quality during his lifetime. He was apprenticed to his brother John in 1770 and later formed a partnership with him named J&E Troughton. Following John’s retirement in 1804, he maintained the business in his own right and was elected a Fellow of The Royal Society in 1810. He was considered a peer of the great Jesse Ramsden, responsible for numerous developments in surveying and navigational instruments including the invention of the pocket sextant. From 1826 Troughton merged his business with that of William Simms.

Simms was born in Birmingham but moved with his family to London where his father was employed in making marine compasses. He was apprenticed to a goldsmith, William Penstone but turned over to his father (also William) two years before completion. In 1815, he emerged and went into business as a Freeman of the Goldsmiths Company of London. Soon after, he submitted his plans for an ‘improved protractor’ to The Royal Society and was supported by Thomas Jones, the famous instrument maker from Charing Cross and originally one of Jesse Ramsden’s workmen. His work and ideas on the development of dividing engines brought him into close contact with Edward Troughton as Simms, re-divided an engine that had been made by Troughton some years earlier and required an overhaul however, the relationship with Troughton is considered to have been formed after working together on a commission for Sir James South for the East India Company.

The partners continued to work at the highest levels, involving themselves in manufacturing instruments for expeditionary surveys and at home for the new and burgeoning railway industry which sprang up in the 1830’s. Troughton would have been in his seventies by this point, and he eventually died in June 1835 leaving Simms to continue as the sole remaining partner.

Although the loss of such a pillar of the industry must have been significant, Simms continued to work with The Royal Observatory and went on to exhibit at the Great Exhibition of 1851 under the original company name.

James Glaisher’s report of the Philosophical Instrument Class of the Exhibition makes it clear that amongst the instruments shown by Simms there were included some earlier pieces that were manufactured by Troughton himself for the Astronomer Royal at Greenwich. For these instruments to remain relevant thirty years later is certainly an accolade.

Probably owing to the hugely difficult competition, its seems that Simms was not successful in achieving a medal for his efforts according to Glaisher’s report, however, he states:

“For the several inventions in these beautiful instruments, the jury voted unanimously the Council medal to Mr Simm, and which award was also passed unanimously by the Group, but was not confirmed by the Council of Chairmen, and therefore Mr Simms will not receive that kind of medal to which the Jury considers him fully entitled.”

William Simms died nine years later in 1860, the same year that an expansion of manufacturing works had been opened at Charlton. His son (also William) and his cousin James continued to run the business thereafter and maintained the company’s good and expanding reputation at home and abroad. It became increasingly involved in providing instruments for military use and although the Great War would likely have seen an increase in demand for the company’s products, it merged in 1922 with T Cooke & Sons to become, Cooke Troughton & Simms after running into financial difficulties.

The company still exists today and now trades as Cooke Optics Limited with a focus on cinematography lenses.