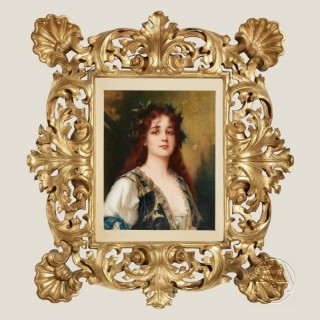 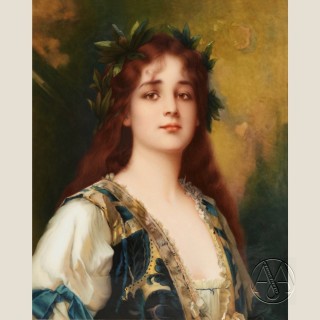 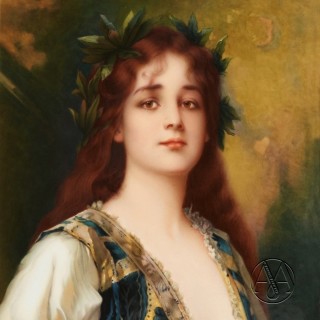 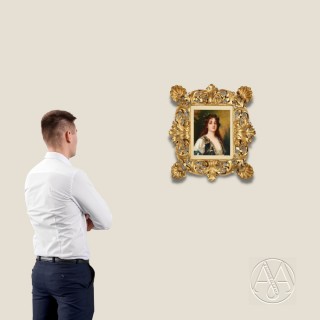 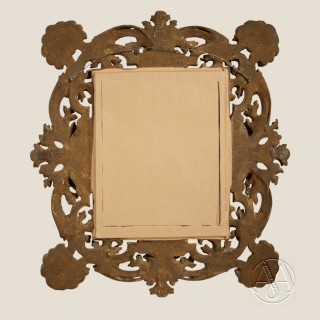 This fine porcelain plaque depicts an auburn beauty adorned with a crown of clementine leaves after the painting by Prof. Conrad Kiesel (1846-1921). The present subject, ‘Clementine’, is possibly a role played by the famous 19th century actress Marie Dolores Eliza Rosanna Gilbert (1818-1861), also known as ‘Lola Montez, the Spanish dancer’.

Originally trained as an architect, Conrad Kiesel (1846-1921), was a successful German painter and sculptor, working in both Munich and Berlin. Following a visit to Holland, Kiesel returned to Berlin to study painting and then moved home to Duesseldorf, under the tutelage of Wilhelm Sohn.

In 1885 he settled in Berlin as a portraitist and genre painter, much of his work reflecting an interest in the Eastern exoticism. He received commissions from Emperor Wilhelm II and won an honorarium at the Berlin Academy of Art.

He submitted works regularly in the Berlin and Munich exhibitions and received an honourable mention at the 1900 World Exhibition in Paris.

Founded in Berlin in 1750 ‘KPM’ or ‘Koenigliche Porzellan-Manufaktur’ acquired its name and Royal patronage when the Prussian king, Frederick the Great, purchased the manufactory in 1760.

Its distinguished trademark from then on became the royal blue sceptre, which is stamped (painted prior to 1837) on every piece. All painted pieces produced by KPM are signed by the painter.

The complicated and exacting process of painting on porcelain became very popular in the mid to late nineteenth century. Drawing inspiration from old master portraits and genre scenes, artists were able to achieve incredible images embued with a luminous beauty through the translucent quality of the porcelain.

KPM porcelain represented the height of technical and artistic achievement during this period and large plaques particularly signed examples have become rare and highly sought after.