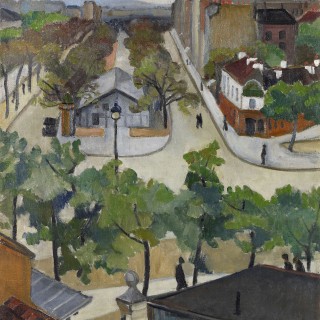 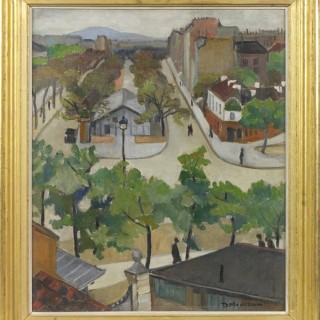 Painted while the artist was living in Paris in the mid 1920s.

A niece of the writer Somerset Maugham, Daphne began studying painting in France at the Académie Ranson, with Polish expressionist Apple Mutter at the studio of André Lhote and at the Académie Notre Dame des Champs. In 1914 she exhibited in the company of some students of the Académie Ranson, at the Galerie Druet in Paris and in 1921 her work was accepted at the Salon d’Automne. The following year she returned to London and graduated from the Slade School of Art. In 1925 she joined her sister, a dancer with the Sakharoff Company, in Italy and while at Turin began studying at Casorati’s art school. Eventually marrying her tutor the great Italian painter Felice Casorati she began to exhibit successfully internationally. Her work was shown at the Rome Quadrennial from 1935 to 1965 and at the Venice Biennale from 1928 to 1950. Maugham’s work was also exhibited in Palazzo Strozzi in 1967 during Carlo Ludovico Ragghianti’s famed exhibition Modern Art in Italy (1915–1935).