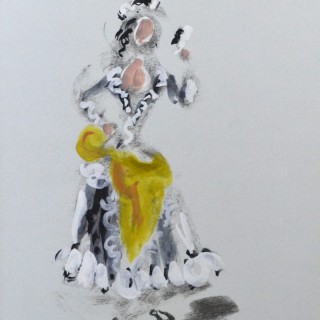 Costume Design for the Barber of Seville

Costume Design for Rosina in the Barber of Seville

Born in London, his mother being the daughter of the Punch cartoonist Edward Linley Sambourne and his father a soldier and stockbroker. After Eton he studied art at the Slade under Henry Tonks; Rex Whistler was a fellow student. Although his studies concentrated on life drawings he also made papier mache and wax masks for student events and an exhibition of these masks at the Claridge Galleries in 1925 let to his first theatre design commission for the Diaghilev ballet production of Zeephyre et Flore. By the early 1930s had established himself as one of Britain’s principal designers for the stage. He went on to design for many theatrical, operatic, ballet and film productions becoming one of the most highly paid and sought after theatre designers in the world.

His books included Stage Designs and Costumes, 1933; Designs for A Midsummer Night’s Dream, 1957 and Delightful Food, 1958. He held one-man exhibitions at the Leicester Galleries and Redfern Gallery, designed interiors and gardens of the Dorchester Hotel, Flaxley Abbey, Gloucestershire and elsewhere as well as several houses and grounds in Barbados and Mustique. The Victoria & Albert Museum hold the majority of his design archives.

The present design is a colour variation of the design for the dress of Rosina in the 1954 Glyndebourne production of Rossini’s Il Barbiere de Siviglia. A design for the same costume, but with a red over skirt, is in the collection of the Victoria & Albert Museum, London.

Costume Design for the Barber of Seville