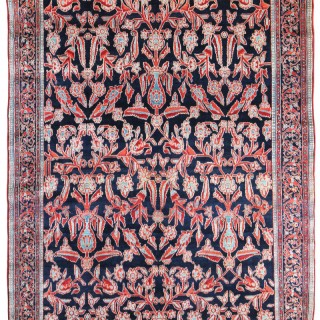 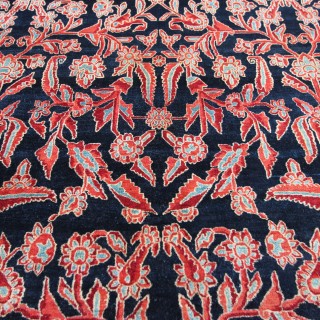 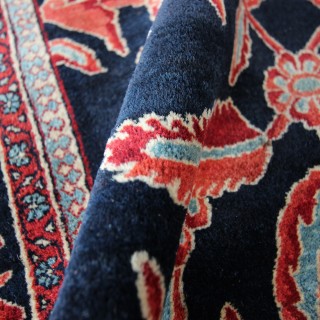 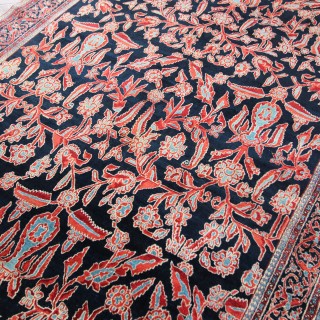 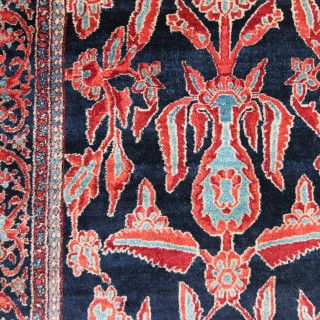 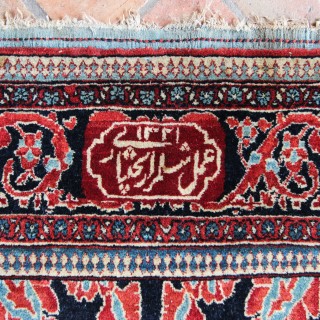 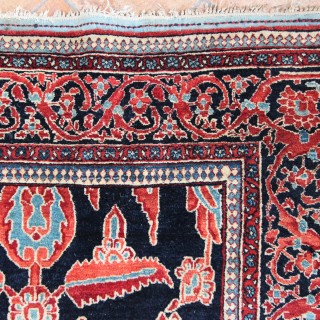 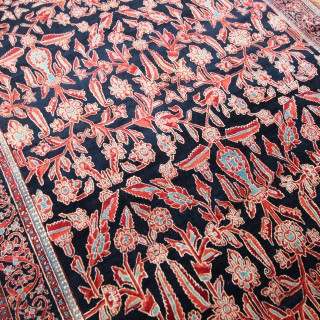 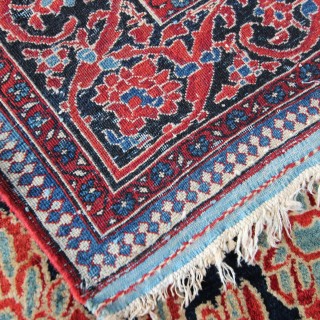 A rare near perfect condition and dated antique Baktiari carpet, woven with the Islamic date 1321 which translates to 1903! So this exceptional fine carpet is 117 years old.  Also with the date is the weaving location ‘Shalamazar’ which is the village in the southern Chahar Mahal, a very fine weave and the glossiest wool, which almost has a silk like appearance.  The pile height is very deep too and with a deep blue almost black background, the pale blues and rich orange/red dyes are used for the all over floral leaf design.  The ends have been finished with kilim and this is all original and secure.  A truly amazing rare example in remarkable original condition, it has been in a private collection for many years.  One of the best Baktiari’s we have seen in over 30 years.

We offer the service of viewing any of our carpets & rugs in-situ in London, Surrey, Hampshire & the UK by appointment. Request a home visit to arrange a convenient day and time to view this rare beautiful antique Baktiari carpet in your own home.

Baktiari carpets are fascinating weavings, with a wide range of qualities, from coarse tribal weavings, and single wefted productions in geometric designs from Borujen and Farah Dumbeh to fine double-wefted carpets from Shalamazar and Chahal Shotur. A wide variety of designs too, the most famous is the ‘Garden’ design, a collection of rectangular boxes with different floral motifs in each box.  Rugs from Shalamazar and Shotur draw influences from neighbouring city of Isfahan and are more curvilinear in design.

Bakhtiari carpets are based on a cotton foundation warp with a wool weft usually taken from the herds of the producing tribe. This leads to unique carpets that differ depending on the characteristics of each tribe’s wool. The wool can range from dull to extreme glossy and the resultant pile is clipped medium to high. The best carpets with the highest knot density are often known as Bibbibaff, this rug is a very fine example and could be considered to be close to the best type. It is surprising it is signed Shalamazar as we have not seen one this fine before.

There are some 200 villages in the region of Baktiari, who all produced beautiful rugs around the late 19th century and in some quite striking designs.  Baktiari, which is west of Isfahan, Persia is a region where rugs used a similar medallion format to those of Isfahan rugs. This is where the similarity ends, as village rugs from Baktiari are often coarsely woven on a wool foundation whereas Isfahan rugs are much finer and woven using a cotton foundation.

Remarkable condition all over, original kilim end finishings, a lush high wool pile all over with no restoration. A very collectable rare carpet.