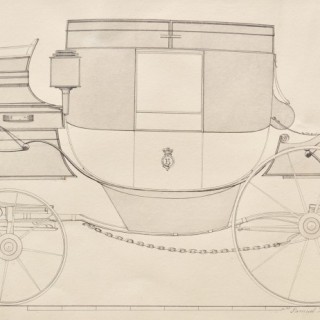 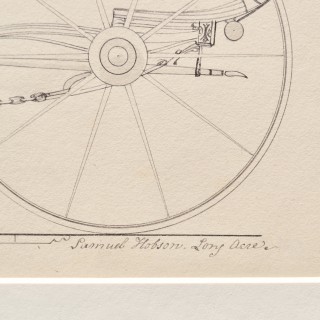 Design for a Carriage by Samuel Hobson

An original 19th century carriage design from the Peters Collection.

Thomas Peters, later Peters & Sons were at the forefront of the London carriage building trade throughout the 19th century. Established in 1798 and operating from premises in Park Street, they built carriages for the English and foreign Royal families as well as for the aristocracy and the City of London. Two of their carriages are still in use in the Royal Mews, including the Glass Coach. Peters and Sons exhibited at the 1851 Great Exhibition as well as the International Exhibitions of Paris, Vienna and Philadelphia. They continued to trade under their own name until 1930.

The collection also includes a number of designs by Samuel Hobson who was widely believed to be the most influential carriage designer of the 19th century. Writing in 1877 George Thrupp remarked, “Samuel Hobson … may be truly said to have improved and remodelled every sort of carriage which came under his notice, especially as regards the artistic form and construction both of body and carriage.” Hobson initially worked as an apprentice with Barker & Co of Chandos Street, setting up his own business in Long Acre in about 1815. Despite being a successful draftsman and designer he was not a good businessman and was forced to sell his business in 1837. At that time Peters & Sons acquired the designs and combined them with their own archives. In 1932 Peters & Sons were acquired by Offords & Sons, who were by then building bodies for motor cars. At around this time the archives were dispersed. Half were later acquired by the Metropolitan Museum of Art, New York and these form the majority of those remaining and come from a private UK collection.

Design for a Carriage by Samuel Hobson