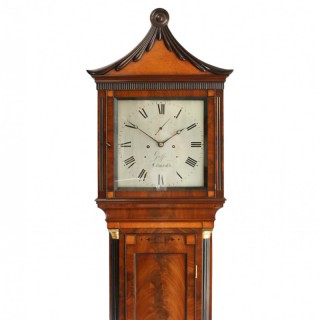 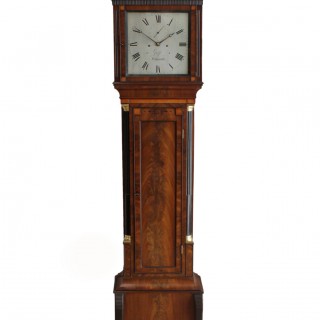 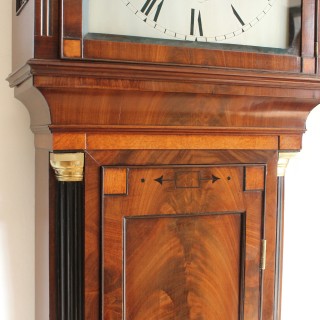 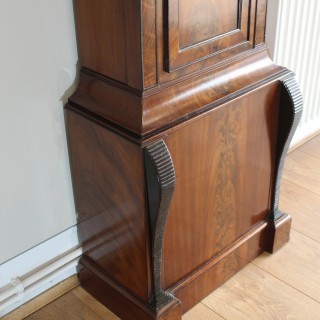 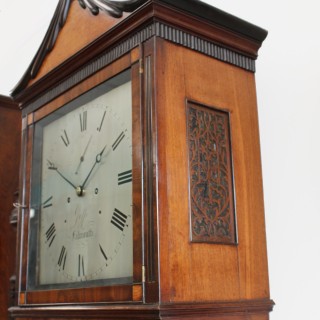 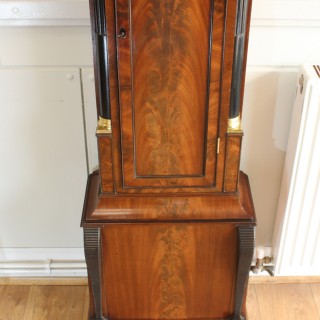 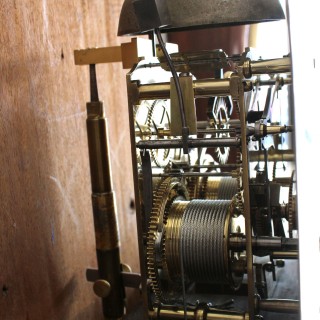 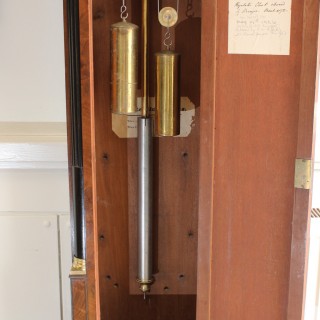 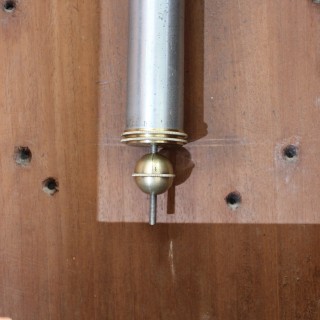 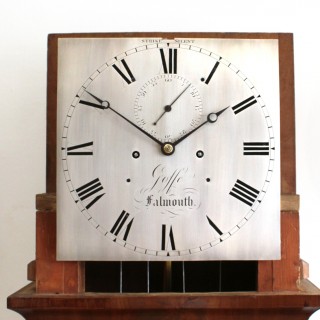 A mahogany Regency domestic regulator longcase clock of excellent quality in respect of both movement and case.

The case has flame mahogany veneers that run throughout the front, down the centre of the trunk door, across the base moulding and down through the base panel. Some high contrast amboyna veneers have been used for accents, and for the hood pediment. The case has some restrained Egyptian design influences in contrasting ebonised mouldings to the base. The case design is informed by the eminent Regency designer Thomas Hope who was inspired by classic Greek and Egyptian styling. The same design of case was also adopted by other high end clockmakers, including Barwise.

The 12 inch square silvered brass dial is framed by a ebonised border. The dial is engraved with Roman numerals and subsidiary seconds dial and signed Goffe, Falmouth.

The overhauled five-pillar eight-day duration movement is of the highest quality. It has dead beat escapement, maintaining power and strikes on a bell. The pendulum has a giltwood rod, and cylindrical zinc bob. Below the bob, a small brass ball is for fine adjustment of the timekeeping.

William Goffe, Watchmaker and Chronometer maker to his Majesty’s Packets, is listed in as working at The Moor, Falmouth c. 1800 in Cornish Clocks and Clockmakers [H. Miles Brown]. He is listed as a London maker in Baillie’s Watchmakers and Clockmakers of the World. This case style is certainly grander than would be expected of a provincial maker, and it seems that Goffe retained his London contacts for casemaking.

A “packet ship” was originally a vessel employed to carry post office mail packets to and from British embassies, colonies and outposts. Falmouth boomed for over 150 years between 1688 and 1850 under its appointment as Royal Mail’s Packet station. Such a prestigious appointment as Chronometer maker to his Majesty’s Packets have been the key to a London clockmaker moving to Cornwall.