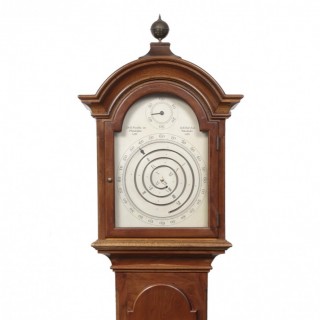 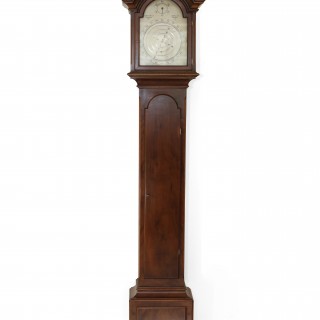 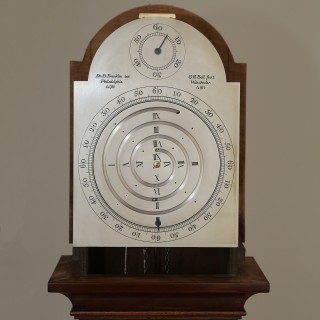 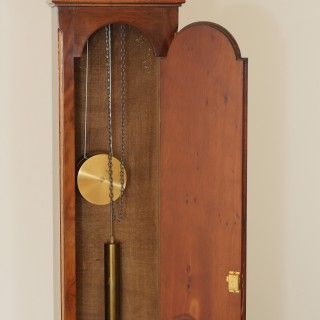 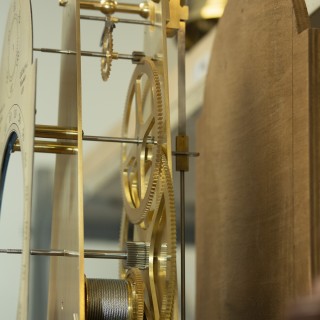 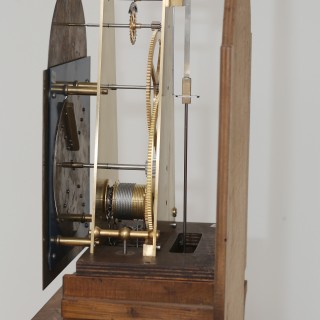 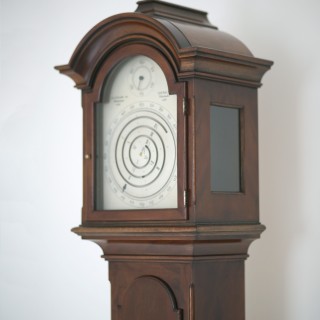 A limited edition longcase clock By Geoffrey H. Bell, 1975, based on a design by Dr. Benjamin Franklin in c.1780. The Franklin dial was first mentioned in James Ferguson, Select Mechanical Exercises: Shewing how to construct different Clocks, Orreries, and Sun-Dials, on Plain and Easy Principles. [1]

Geoffrey Bell has used the fundamental principle, and replaced the hand with an intriguing spiral. The 9-inch silvered break-arch dial has a central disc with a cut-out spiral track for a ball bearing. The 8-day movement drives the disk; each full rotation of the disk takes four hours to complete. The ball bearing starts its journey at the further extremity of the spiral, and works its way to the centre over 12 hours, through the force of gravity alone.  The hours are engraved with Roman numerals. An outer minute band on the disk displays four hours in four sets of ten-minute divisions, engraved in Arabic numerals. The minutes are read by the pointer hand at the bottom of the dial. When the ball reaches the centre, it falls back to the bottom to restart its journey.

The overhauled eight day single-train timepiece movement has four knopped pillars uniting the tapered plates, an anchor escapement and inline four-spoke wheelwork. It is wound by chain, and driven by a drum-shaped yo-yo brass weight suspended from a cable.

The elegant yew-wood veneered case stands 203cm high (80 inches) to the top of the brass finial.

The clock is accompanied by the original receipt and instructions from Geoffrey Bell, The Dean, Alresford, Hampshire.

Geoffrey Bell owned successful clock workshops in Winchester, which Gerald Marsh took over in 1972. In the latter part of his working life, Bell made several high quality limited editions of clocks based on interesting innovations in horology, including congreve and gravity clocks. In this same longcase case design he produced a small run of this clock based on a Dr. Benjamin Franklin design, also an astronomical sun/moon Franklin clock.

With thanks to the Wellcome Images collection for the use of the drawing. [See page for author, CC BY 4.0