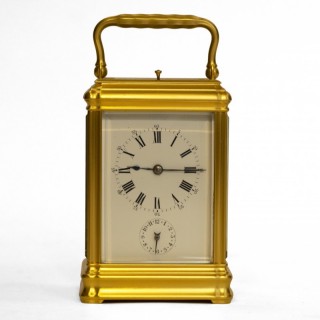 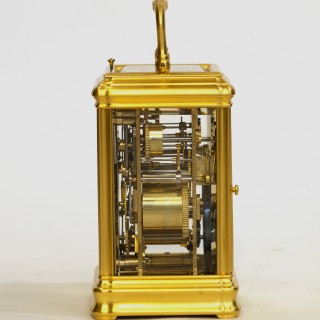 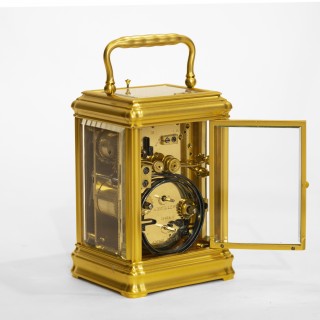 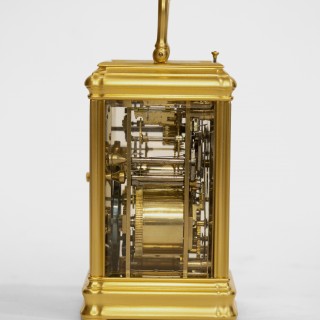 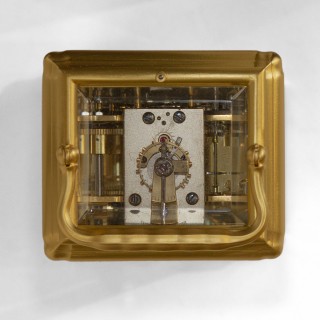 A particularly small grande-sonnerie striking carriage clock by Leroy & Fils. The newly regilded gorge style of case is of ‘standard’ size for a carriage clock; grande sonneries are more usually housed in grande sized cases as there is so much more movement to accommodate. Indeed, it was necessary to adapt the frame of the case to accommodate the alarm hand when removing the movement for servicing.

The backplate of the movement bears several serial numbers- 4890 beside ‘AD’ within a circle and Drocourt’s number 21195. Drocourt’s trademark oval is also indistinctly stamped above. Also Leroy’s serial number 13693 is stamped to the centre of the backplate and repeated alongside their signature on the outer edge of one of the plates, visible through the side glass.

The white enamelled dial is in perfect original condition, the Roman time dial over the small Arabic alarm dial.

The eight-day movement strikes the grande sonnerie sequence on the quarters on a pair of gongs. That is to say, on the quarter, half and three-quarter hour the clock is ting-tang striking on two gongs following the hour strike.
The Sonnerie option gives a ting-tang strike on the quarters, with the hour (on one gong) only at the full hour. Silent is self-evident. There is also an hour repeat button on the top of the clock, which simply repeats the last hour struck. The strike selection lever is located on the underside of the base.