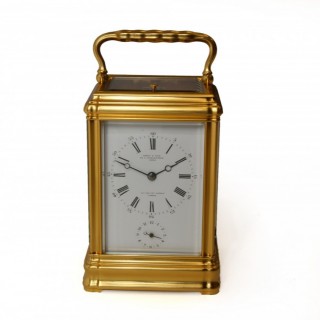 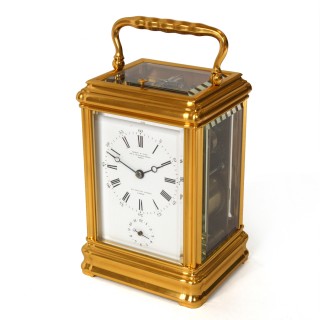 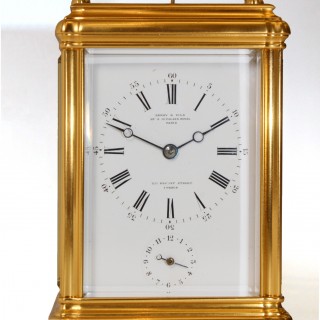 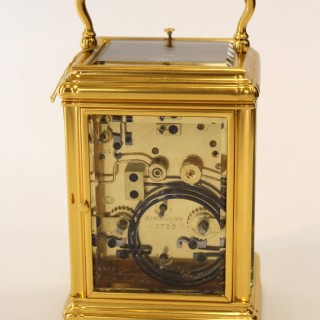 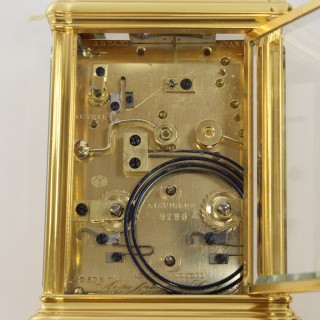 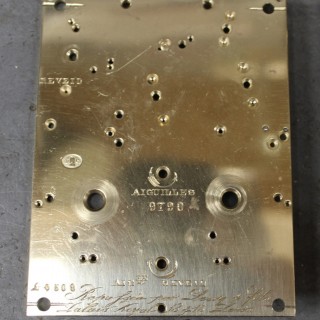 The newly regilded case is pristine, with a one-way folding handle.

The gong-striking movement strikes the hours and the passing of the half hour, and repeats the last hour on pressing the top button.

The 8-day movement has Drocourt’s signature straight wheel crossings and ringed pillars, and a silvered platform escapement with narrow balance cock. The front plate is stamped with the Holingue Freres blanc roulant number 19733, and the other plates and case parts with clock serial number 10508. This movement can be dated to circa 1874 as, according to extensive research carried out by Leigh Extence, it is fairly certain that Drocourt’s clock serial number 10757 was made in 1875/76.

The white enamel dial is signed LEROY & FILS, 15&18 PALAIS ROYAL, PARIS   211 REGENT STREET, LONDON. Note that the Paris address is above the London address. The backplate script is also all in French – Retard and Avance where we see Slow and Fast on others, etc. suggesting that this carriage clock was made for the French market. A small alarm dial sits below the time dial.

The firm of Leroy et Fils was founded by Bazile Charles Leroy in 1789. He was a clockmaker to the Emperor Napoleon, The Duke of Orleans, The Duke of Bourbon and Princess Pauline. In 1823, he filed a patent for self-winding atmospheric clock operated by a weather vane and in 1840 a patent for wind clocks. When Charles Louis died in 1865 his son Louis Leroy took over the running of the business. Leroy & Fils acquired 211 Regent Street sometime prior to 1866, and by 1875 had also acquired 213 Regent Street. By 1885, the firm had moved to Bond Street.