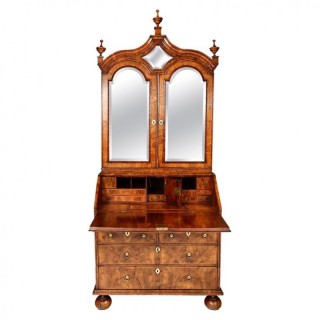 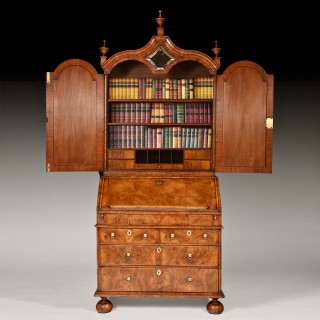 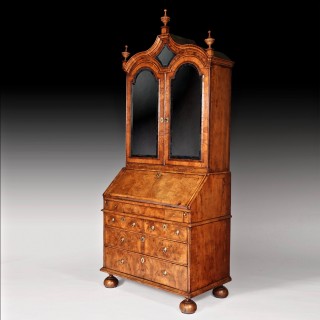 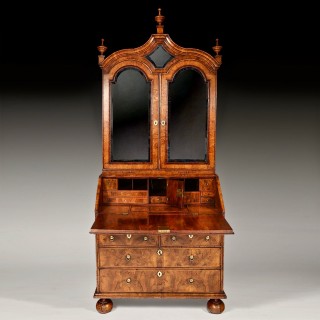 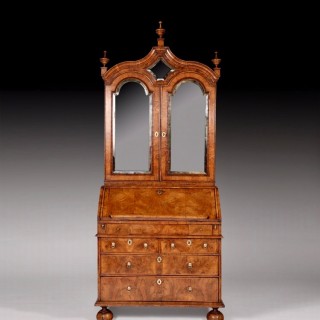 A superb and exceptionally well proportioned early 18th century figured walnut ‘pagoda topped’ double dome bureau bookcase, circa 1720 England. The upper section is surmounted with what is believed to be the original solid walnut finials and soft bevelled mirror plates, opening to a removal bank of walnut veneered and feather banded drawers, cantered by pigeonholes below two shelves. Candle slides are neatly stowed below the bookcase doors to reflect the light.
To the moulded bureau, the fall opens to reveal pigeonholes, long and short asymmetric drawers each beautifully veneered in figured walnut and feather banded, cantered by a cupboard door which neatly conceals an open compartment and drawer. Below the fall, two short and two long graduating oak lined drawers are each book-matched in superb sections of hand-cut figured walnut veneers over bun feet.

It should be noted that this exceptional desk and bookcase, is not only of the finest cuts of figured walnut veneer but exquisitely made at the pinnacle of design which had gradually evolved predominantly in London, during the late 17thand early 18thcentury.

The actual description ‘desk-and-bookcase’ appears to be first recorded in the accounts of the Royal cabinet-maker Gerrit Jensen (fl.1680-d.1715) who supplied several for the Royal Household from 1710 (Bowett, op. cit.), and another described as ‘a walnut writing desk, the top for books and patons and glass in the doors asked’ for the 5th Earl of Salisbury, Hatfield House. Another maker of this form of desk was the London cabinet-maker John Gumley (1691-1727) who advertised in Richard Steele’s Lover on April 24 1714 that he ‘hath taken for a Ware-house, and furnished all the upper part of the New Exchange in the Strand’ continuing with an extensive list of his stock including ‘Desks and Bookcases.’ In 1714 he supplied one of these in walnut to James 1st Duke of Montrose for the sum of £11. Russian cabinetwork of this period was strongly influenced by Tsar Peter I return to Russia after his studies in London. He subsequently sent twenty-four cabinetmakers who were working in Amsterdam to London to train as furniture makers. One of these cabinetmakers named Fedor Martynov made furniture for the Empress Anna Ioannovna. Martynovs drawings are almost identical to the present piece.

Featured in the Financial Times, January 2021.

A walnut bureau bookcase of the same form and period sold from the private collection of Patricia Kluge at Albemarle House in Virginia, USA on the 9th June 2010.

Excellent condition and colour throughout.