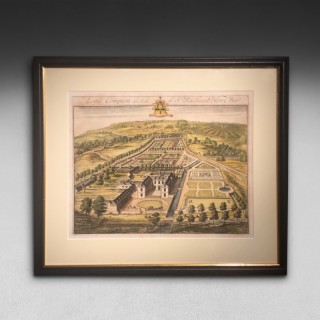 Johannes Kip (1653 – 1722) was a Dutch draughtsman, engraver, and print dealer who was active in England after producing works for the court of William of Orange in Amsterdam. Following the Glorious Revolution of 1688, Kip accompanied the Court to England and settled in Westminster where he conducted a thriving print selling business from his house in St. John’s Street. He also worked for various London publishers producing engravings, largely for book illustrations. His most important works were the execution of the illustrations for Britannia Illustrata, 1708; The Ancient and Present State of Gloucestershire, 1712, and Le Nouveau Theatre de la Grande Bretagne, 1715

Howe was initially a supporter of Exclusion, but his political views soon afterwards moved towards Toryism. Having served for other family boroughs in earlier Parliaments, he was returned in 1690 for Cirencester on the strength of his own interest, based on his estate some six miles away at Chedworth. In the new Parliament he was classed in two lists by Lord Carmarthen (Sir Thomas Osborne†) as a Court supporter. His activities as recorded in the Journals cannot usually be distinguished from those of his first cousin John Grobham Howe except where his christian name is used, although it can be assumed that most references must be to his prominent cousin. On 13 Oct. 1690 Howe brought a complaint of privilege to the attention of the House, but it was not accorded a report by the privileges committee. Noted by Carmarthen in December as likely to support him in the event of an attack on his ministerial position, he featured as a supporter of the Country opposition in Robert Harley’s* analysis of the House compiled in April 1691. He was appointed on 31 Oct. to assist in preparing the bill for securing the rights of corporations. On 19 Jan. 1693 he initiated a debate against a bill to stimulate the woollen industry, claiming that its main purpose was to serve the interests of the Blackwell Hall factors. The following session he was appointed to drafting committees on bills to remove legal constraints on the clothing trade (14 Nov. 1693), and for the apprehension of highwaymen (18 Nov.).

Howe successfully contested Cirencester again in 1695. His continuing opposition to the Court is illustrated by the record of his behaviour in 1696. He was forecast in January as likely to oppose the Court over the proposed council of trade, refused to sign the Association in February, and voted against fixing the price of guineas at 22s. in March. In the next session, on 25 Nov., he voted against the attainder of Sir John Fenwick†. That winter he was turned off the Gloucestershire commission of the peace for his reticence in signing the Association. On 5 Dec. he was named to a committee to investigate deficiencies of funds granted by Parliament, though by the 17th it was necessary for him to obtain leave of absence to attend his sick family. In December 1697 he told his brother-in-law and former electoral patron, the High Church Tory peer Lord Weymouth (Thomas Thynne†), that he was ‘little conversant with men of business’, but spoke approvingly of a recently published pamphlet against standing armies which he found ‘hath done a great deal of service’. He was granted leave of the House again on 13 Apr. 1698, quite possibly in connexion with his bid for one of the Wiltshire seats in the approaching general election. Although the family’s main Wiltshire estate was situated at Wishford, near Salisbury, Howe’s own interest was considered stronger in the north of the county. Despite canvassing extensively he was unable to raise sufficient support for his campaign and withdrew, by which stage he had already renounced his interest in standing again at Cirencester. In a comparative analysis of the new and old Parliament drawn up about September he was retrospectively classed as a Country supporter.

Howe renewed his candidacy for the county in the first 1701 election and was this time returned unopposed. During the ensuing session he was included on a list of those who would support the Court in continuing the ‘Great Mortgage’. One of his local concerns at this time centred on irregularities by the receivers of tolls for the Gloucester–Birdlip road, and he and Sir Richard Cocks, 2nd Bt.*, succeeded in having a clause inserted in a bill for the Minehead road in Somerset empowering the Gloucestershire justices to administer the tolls. He was defeated for Wiltshire in December 1701 but made a successful comeback in 1702; he was to retain the seat through every subsequent election until he retired in 1727. In May 1703 he succeeded to his father’s baronetcy and estates, and thenceforward it becomes easier to discern his activities from the Journals. In mid-March 1704 Lord Nottingham (Daniel Finch†) forecast him as a probable supporter in the attack on him over the Scotch Plot, and on 28 Nov. he voted for the Tack, fulfilling Harley’s forecast made the previous month. In the aftermath of the 1705 election he was classed as ‘True Church’, and on 25 Oct. voted against the Court candidate for Speaker.

Howe’s supervision of a private bill concerning the estate of a Wiltshire baronet during January and February 1707 marks the beginning of a busier phase in his parliamentary routine. He was classed as a Tory in a list of early 1708. His continued attachment to Country principles is shown in his appointment on 17 Jan. 1709 to the drafting committee on a bill to prevent bribery at elections. In March he took charge of a private estate bill. At the end of the year he initiated a measure to establish a land registry for Wiltshire, but after he presented it on 14 Dec., it failed to progress beyond a second reading. In the early months of 1710 Howe played an important part in sorting out the tangled affairs of Sir Humphrey Mackworth’s* Company of Mine Adventurers and in bringing to parliamentary attention the complaints of its proprietors and creditors. His brother-in-law James Thynne*, one of the company’s directors, had died the previous year, and Howe as one of his executors had the task of recovering his £7,087 investment. At a meeting of the general court in London on 1 Feb. 1710, Howe’s proposals for remodelling the company were readily adopted and he was named as a ‘manager for the creditors’. In the Commons, on 13 Feb., he was appointed to a committee to investigate the proprietors’ complaints of fraud and mismanagement, appearing fourth in the order of nominations. On 13 Mar. his name headed those appointed to draft a relief bill. The measure was dropped, however, in favour of a second bill, ordered on 31 Mar., to bar Mackworth and his accomplices from leaving the kingdom, in which Howe was also involved. Howe voted against the impeachment of Dr Sacheverell.

Classed as a Tory in the ‘Hanover list’ of the 1710 Parliament, Howe featured in the proceedings of the first session as a ‘worthy patriot’ who helped detect the mismanagements of the previous administration, and was listed as a ‘Tory patriot’ opposed to the continuance of war. He was appointed to the committee to draw up the Address on 29 Nov. 1710, while a week later his support for a place bill resulted in his inclusion on its drafting body. On 5 Feb. 1711, following a new petition from the proprietors and creditors of the Mine Adventurers, he was appointed to prepare a bill to restructure the company; on 6 Apr. he was first-named to its second-reading committee, and at the report on 3 May was teller against adding a clause which laid down that the company’s creditors were to be repaid in shares rather than cash. On the 12th a pamphlet attacking the bill was declared libellous by the House and a committee under Howe’s chairmanship was appointed to ascertain its author and publisher. In the 1711–12 session his activity seems to have been limited to inquiry committees. At the end of May 1713, with Scots Members threatening to dissolve the Union, Howe chose to absent himself from the House and was reported by his brother-in-law Weymouth to be ‘positive in his resolution’ to leave town with his wife. On 15 June, however, he supported the ministry from the floor of the House and with his vote in the committee on the French commerce bill and voted for the measure again at its report stage on the 18th. Shortly after the start of the 1714 session, he took the lead in promoting a bill for the repair of several Wiltshire highways. In three lists of Queen Anne’s last Parliament drawn up in 1715, he was classed as a Tory.

A consistent opponent of the Whig ministries after 1714, Howe was assumed to be a Jacobite sympathizer in the early 1720s though it is not clear on what grounds. He died on 3 July 1730 and was buried at Great Wishford. Having no surviving issue, he devised his principal estate in Wiltshire and Gloucestershire to John Howe† (later 1st Lord Chedworth), the son of John Grobham Howe, while his three Somerset manors passed to another kinsman.