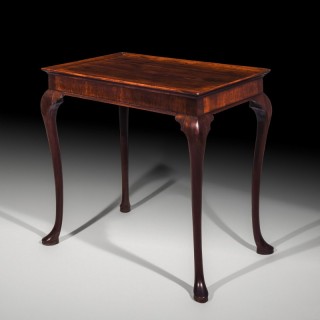 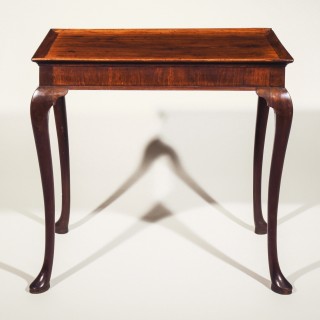 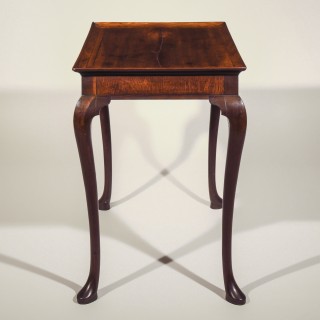 The solid rectangular tray top, having an applied convex molding with a beaded outside edge, above a plain veneered apron with a convex moulded skirt. Raised on four particularly graceful cabriole legs with squared knees, terminating in slender slipper pad feet.

This finely proportioned tray-top tea or silver table represents the most fashionable form of tea table, having the dished rectangular top with fixed legs, meant as the sculptural centerpiece of the lavish tea service without tablecloth or covering.

Elegant both in form and function, this design is a masterful combination of Chinese tradition and high style English furniture fashions. The growth of tea drinking as a social custom among the elite occasioned the production of Fine furniture, especially in urban centers of wealth and commerce. The tea table was the focal point of the tea ceremony and its construction and design were informed by its exotic ties to the Far East. The rectangular tops, shaped skirts and cabriole legs were features of tables made in China since the 15th century. These design elements were transferred to England in the early 18th century and brought into fashion in the colonies during the Queen Anne period.