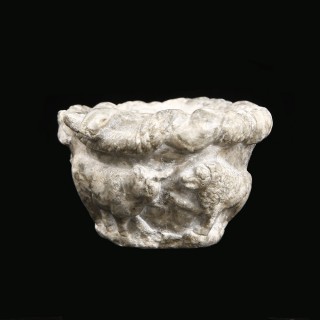 A finely executed small cultic libation cup, engraved from a complete veined marble piece, features an unbroken, smooth contour. The cup has slightly sloping walls that rise from a flat base and are gradually incorporated into a styled lip, which is sculpted as a coiled serpent. Its naturalistically sculpted snake head, featuring detailed facial features, is depicted elegantly resting on its heavily coiled body and slightly protruding from the lip’s edge. The multiple curved recessions to the lip are modelled in accordance with the serpent’s natural body shape. Rhomboid incisions further decorate snake’s body, imitating its skin. The zoomorphic scene, modelled in full three-dimension, is presented on a horizontal register that embraces the cup’s body. In which, a realistically rendered bull is depicted, flanked by two roaring lions. The bull and lions are portrayed in an extremely naturalistic manner, their strong physiques and muscular features are meticulously expressed through clearly depicted anatomical details and well-balanced body proportions. The bull is depicted standing in an intense pose, its legs outstretched in a powerful stance and with a slightly lowered head, seemingly to preparing to charge the lions. The lions mirror each other by extending one of their forelimbs to attack the bull. Their facial features are depicted in detail, including almond-shaped eyes, pointed noses and gaping mouths. Numerous diamond-shaped incisions are neatly engraved at the rear of lions’ necks, suggesting their manes. On the other side, the lions’ tails naturally extend from the hips, and are expressed through two elegant curved lines pointing towards each other, echoing the symmetrical composition rendered in the frontal view.

From an important family collection inherited in the 1980’s, kept by descent by members of the family.

Very fine condition, with some chipping to the edge of the lip.