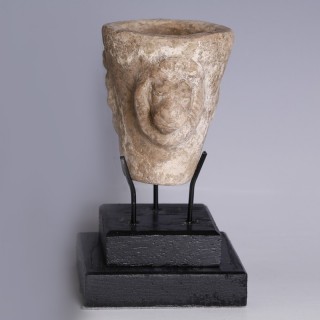 A finely sculpted stone dedicatory cup, featuring the depiction of a female worshipper, flanked by two projecting lion heads rendered in an extremely naturalistic style. The piece can be dated to the Early Dynastic IIIa-b period, circa 2600-2500 BC. The cup features a flattened base, conical shape leading to a wide rim, embellished with a cuneiform inscription. The inscription might have indicated the name of the worshipper, who is represented by the central female figure.

Stone vessels featuring anthropomorphic and zoomorphic decoration seemed to have been absent until the early stage of the Early Dynastic IIIa period, circa 2600-2500 BC. The combination of a female worshipper with clasped hands, characteristic of the Early Dynastic repertoire, and the representation of lion heads, makes this finely decorated cup a distinctive example. The majority of Early Dynastic dedicatory vessels do not feature both human and animal representations. Almost the entire genre of stone vessels of this class were used as votive offerings, dedicated to the temples of deities worshipped by the Akkadians and Sumerians, in Early Dynastic Mesopotamia. This stone cup might have been dedicated to the goddess Inanna by a female devotee, represented here by the central female worshipper, as the lion is one of the main attributes of the goddess.

Provenance: From an important collection of Near Eastern antiquities formed in the 1960-70’s, by descent and imported to London, late 1980’s, from Switzerland. With an original handwritten note by Professor W G Lambert.

Condition: Very fine condition, this cup is supplied with a custom made display stand.