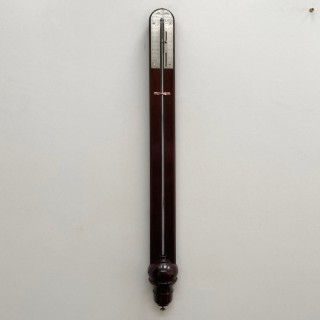 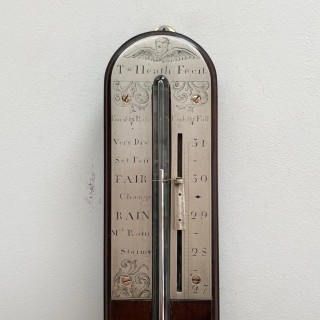 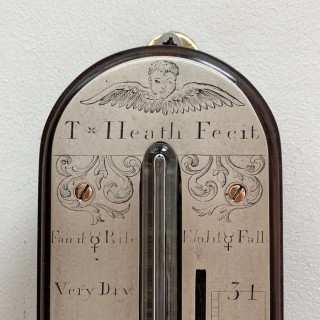 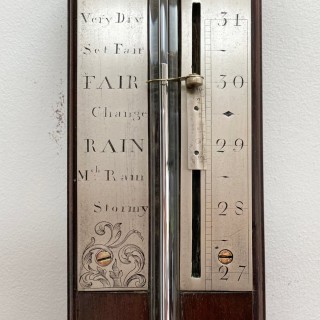 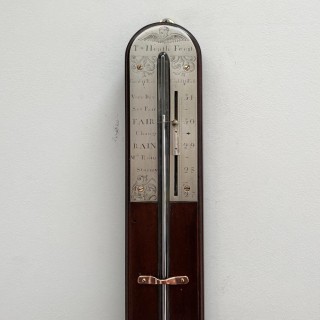 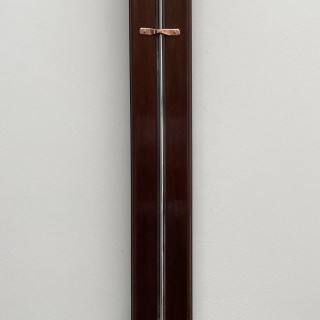 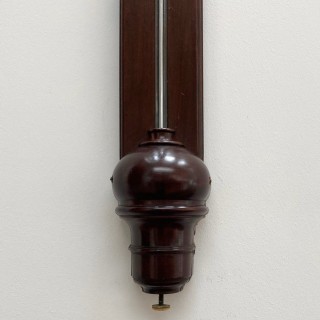 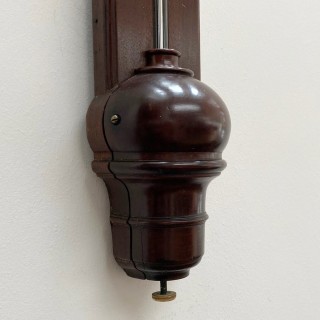 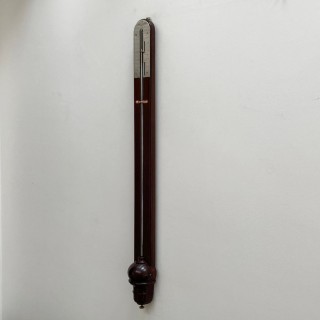 Comprised of a solid piece of mahogany with domed top and fine chamfered edge running the full edge. The chamfering at the top frames the domed topped, silvered dial which is beautifully engraved with a scale to the right measuring 27 to 31 inches of barometric pressure and a Vernier for more precise readings. The left is provided with standard period weather indications and above either side is the script, “Fair if Rise & Foul if Fall”. Three of the four corners are further engraved with superb floral motifs. The domed top of the scale is decorated with a winged cherub and the maker’s name, T. Heath Fecit.

The exposed tube runs down the trunk of the barometer, slightly inset into the wood for protection until it meets a typical Eighteenth Century bulbous style cistern cover. At this point, the cover and the baseboard are similarly shaped in order to mimic the front design for perspective and below the original travel screw remains intact and present. A simple yet fabulously designed example.

The maker, Thomas Heath was born in 1698 to William Heath who was a Yeoman of Luton. Given his landowning status, it was probably not too difficult for him to secure Thomas a London apprenticeship with the instrument maker Benjamin Scott who conducted his business from Exeter Place on The Strand. Heath’s training began in 1712 and would have continued for the obligatory seven year period.

The first records for Heath trading in his own right come in 1720 so it is likely that he continued to work for Scott for a year before applying for his Freedom of The Grocers Company, the approval of which would be required for him to independently trade. His shop premises on The Strand in London were defined as most were at that time (due to the lack of house numbers) with a name befitting of his trade. Heath’s use of The Hercules & Globe was a good choice for this young and ambitious maker and by the end of his first decade of trading, his workshop hosted no less than five apprentices including the historically important maker, George Adams.

Most scientific makers of this early period considered themselves primarily Mathematical Instrument makers and Heath was no exception. These instruments took up by far the largest proportion of his stock in 1723, his advertising including:

Books were also a very good form of advertising for Heath and he was adept at selling educational publications relating to the use of the instruments that he sold. A lot of these publications also included adverts for certain new instruments or inventions that could be purchased at his establishment.

Throughout the 1730’s, Heath began to include optical instruments amongst his products and also found time to employ a further three apprentices. With George Adams achieving his freedom in 1733, a year later the equally famous John Troughton found himself amongst the new acolytes being trained in Heath’s workshops.

A further two apprentices were employed in the 1840’s including Heath’s son (also Thomas) and a young Tycho Wing. At the end of the decade Heath was also elected to the Livery of The Grocers Company.

Tycho Wing joined Heath’s business in 1841 and his appearance proved significant. The young apprentice evidently became close to Heath’s daughter Hypatia and following the completion of his training, the couple became married in 1849. It is unknown what became of Thomas Heath’s son but it must be presumed that he either followed a different career or died early because just two years later, the ageing Heath ventured into a partnership with his new Son in Law to form the business of Heath & Wing. The elder partner continued his rise through the ranks of The Grocers Company and served as Warden in 1854 and eventually held a Seat in the Court of the Company between 1767 and 1769. It should also be noted that in 1764, Heath was amongst the petitioners against the Dollond’s patent for the invention of the achromatic lens.

In 1773 Thomas Heath died and there is some suggestion that even by the late 1760’s he was already becoming frail. Sadly his younger partner was also destined to die early and Tycho Wing is recorded as passing away in 1776.

During its twenty six year existence, the partnership trained a further seven apprentices, perhaps the most famous being Thomas Newman. Newman was the eventual successor to the Wing & Heath business upon Tycho Wing’s death and although his name is perhaps less well known today, his sons included the famous meteorological instrument maker, John Frederick Newman. Upon JF Newman’s death, his business and premises on Regent Street were finally bought out by Negretti & Zambra.

Heath was a highly respected early Eighteenth Century Instrument maker at the forefront of the industry and his legacy cannot be understated. Besides being a maker of distinction, his tutoring also gave birth to both the Adams and Troughton dynastyies. The quality of their workmanship and their approach to business is latterly comparable. The fact that the history of the business can also be traced through to the Newman and Negretti businesses is also a fine accolade