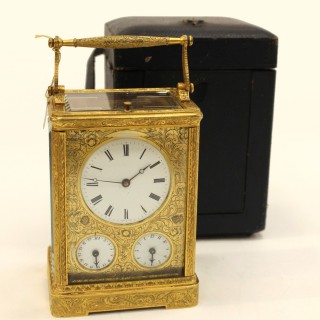 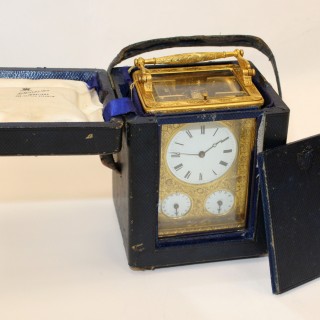 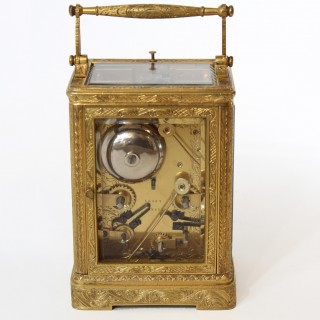 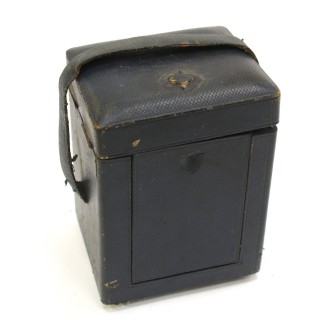 A very fine 1840s carriage clock in a decorative well-engraved case, all in completely original condition and retaining its original gilding. The quality of this clock is exceptional in all aspects as is expected of the work of Leroy. The clock is accompanied with its original blue leather travelling case which remains in exceptionally good condition.

This style of case follows the design of Paul Garnier’s carriage clocks. In the 1840s the design was adapted to be made in multiple parts rather than one piece, for ease of manufacture and construction. This example is one of the earliest of these multi-piece cases.

The enamel dial has Roman numerals and is signed LEROY A PARIS. It is set into an engraved gilt mask, with subsidiary alarm setting and date dials below.

The backplate of the movement is engraved and signed LEROY PARIS, and the platform’s balance cock has also been beautifully engraved. The platform has separate escape wheel and pallet bridges with an additional bridge to clamp the end of the hairspring in place.

The clock strikes the hours and the passing of the half hour on a tuned bell. The running gear for the alarm has been placed at the base of the mechanism, requiring an especially long alarm hammer. The wheel-work is very much finer on these early clock, the engineering beautifully sharp.

The firm of Leroy et Fils was founded by Bazile Charles Leroy in 1789. He was highly respected, being clockmaker to the Emperor Napoleon, The Duke of Orleans, The Duke of Bourbon and Princess Pauline. In 1823, he filed a patent for self-winding atmospheric clock operated by a weather vane and in 1840 a patent for wind clocks. When Charles Louis died in 1865 his son Louis Leroy took over the running of the business. Leroy & Fils acquired 211 Regent Street sometime prior to 1866, and by 1875 had also acquired 213 Regent Street. By 1885, the firm had moved to Bond Street.