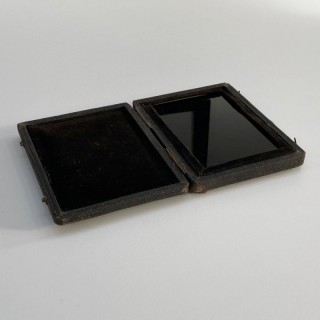 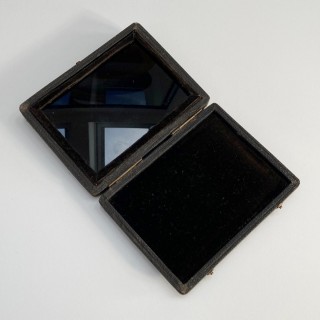 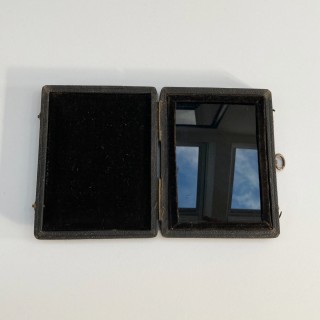 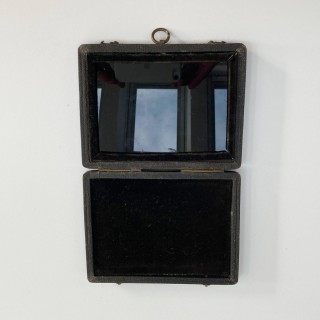 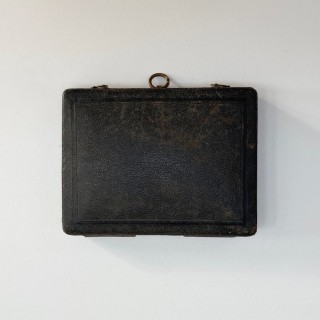 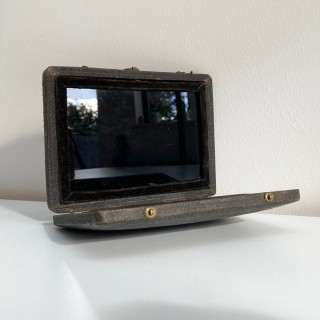 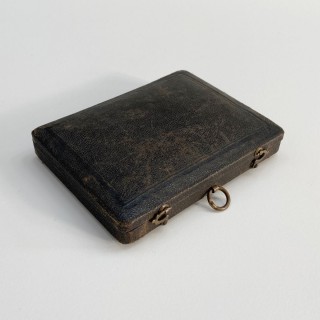 Variously known as Claude Glass, Claude Mirror, Lorraine Glass or Claude Lorrain Mirror, this simple yet intriguing artistic device is comprised of a black rectangular and slightly convex glass housed in a black velvet lined, hinged case. The outside of the case is covered with ray skin with hook and eye clasps and a hanging ring.

The Claude glass’s origins are somewhat murky and there seems to be no general consensus on when they were first conceived, however they were certainly popularised in Britain from around the 1760’s and most famously by the poet Thomas Gray in his “Journal of a Visit to the Lake District” in 1769.

“From hence I got to the Parsonage a little before sunset and saw in my glass a picture, that if I could transmit to you, and fix it in all the softness of its living colour, would fairly sell for a thousand pounds, This is the sweetest scene I can yet discover in point of pastoral beauty the rest in a sublime style.”

So influential was Gray’s enthusiasm for the Claude glass that they were on occasions referred to as “Gray Glasses” and even the famous London instrument maker, George Adams referred to “Black Convex Mirror (recommended by the poet Gray)” in his catalogue of 1787.

A somewhat less poetic description was provided in an 1857 US catalogue of Benjamin Pike Junior which gives a perhaps a more pragmatic reasoning for its use.

“Claude’s black glass mirrors, for perspective drawing. These are very useful for the young artist, as they condense or diminish the view into the size desired for the intended picture, and all objects bear their relative proportions.”

So it seems that the Claude glass much like Wollaston’s camera lucida was a useful aid for perspective and outlining of landscape for artists but its popularity was not born from such practical considerations. Early users espoused upon the glass’s ability to soften and tint the subject in a way that direct observation could not and it is this property that made it so enduring. In fact, it is likely that the effect was considered to be much akin to the paintings of the Seventeenth century artist Claude Lorrain in the way that the painter mastered early experiments with idealised landscape painting. The naming attribution of the Claude glass is much more likely to be for this reason as there is no evidence in existence that Lorrain used such a device.

The Claude Glass continued to be used enthusiastically by professional and amateur artists throughout the early Nineteenth Century although changes in artistic temperament saw it fall out of favour by the 1850’s. John Ruskin in his influential publication, “Elements of Drawing” states:

“It is easy to lower the tone of the picture by washing it over with gray or brown; and easy to see the effect of the landscape, when its colours are thus universally polluted with black, by using the black convex mirror, one of the most pestilent inventions for falsifying nature and degrading art which was ever put into the artist’s hand.”

The fall from grace though in reality was not quite so wholesale and mirrors continued to be produced for artistic endeavour. The French artist Manet experimented with the black mirror in the 1860’s shortly after Ruskin’s dismissive commentary and by the turn of the Century, Henri Matisse is known to have employed the visual aid.

This example is most likely to be of early Nineteenth Century origin due to its rectangular shape. It is considered that most Eighteenth Century examples are more likely to be of round form but it is very hard to be precise with the few that exist. Most extant examples remain in Museum collection and they rarely appear for sale.

This example is in superb condition and remains an intriguing reminder of The Enlightenment.