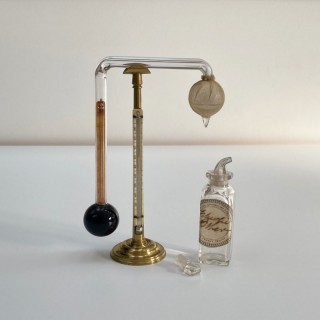 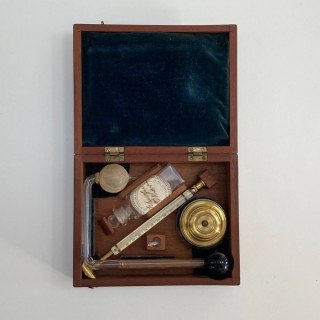 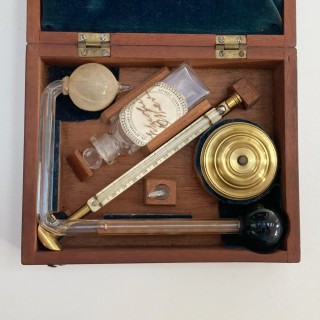 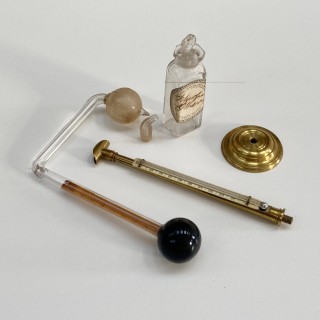 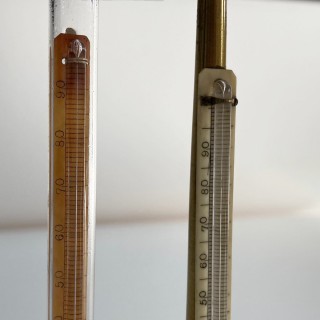 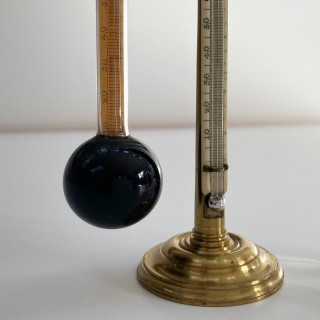 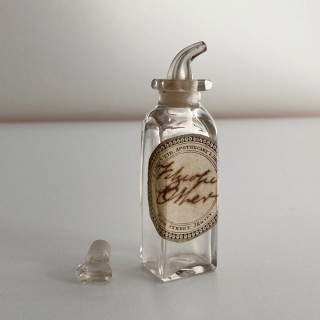 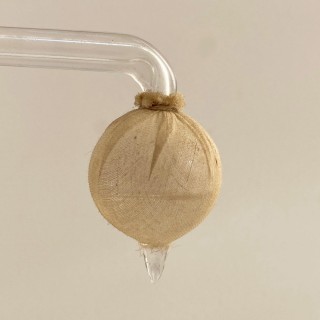 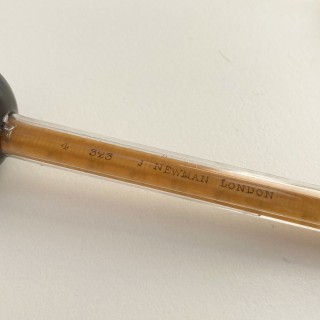 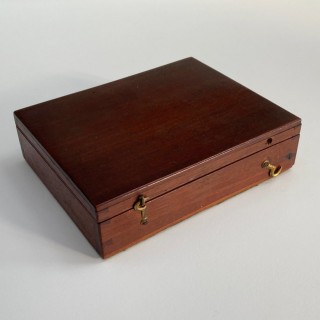 For sale, a cased Daniell’s Hygrometer by John Newman of Regent Street, London.

This early example is comprised of a turned brass base with screw in stand with attached thermometer to the shaft and a U shaped receptacle to the top to hold the glass tube.

The double right angled glass ether filled tube has a bulb at each end, as explained below contains a second thermometer which is marked to the maker J Newman London to the reverse.

The instruments is also provided with a glass ether bottle (now empty) and a glass funnel and comes complete with its original fitted mahogany case.

The Daniel’s hygrometer was invented in order to record the relative humidity of the air and was notably used by Admiral Fitzroy during his famous explorations with Charles Darwin on HMS Beagle.

Both Newman and later Negretti & Zambra were notably involved with supplying instruments to Fitzroy and Darwin during their lifetimes and although there are no Newman catalogues readily available, examples of the Daniell’s hygrometer can be seen in Negretti & Zambra’s, ‘Treatise on Meteorological Instruments’ in 1864 and also their catalogues.

Negretti & Zambra’s catalogue provides a description of its use:

“Daniell’s hygrometer for ascertaining the dew-point by direct observation invented about the year 1820 by the late professor Daniell, of Kings College London.

It consists of a glass tube, bent twice at right angles, and terminating, at each end, in a bulb. In the long limb of the tube is enclosed a delicate thermometer, which descends to the centre of the bulb, which is about three parts filled with sulphuric aether. All the other parts of the tube are carefully freed from air, so that they are occupied by the vapour of the aether. This bulb is made of black glass; the other bulb on the shorter limb is transparent and covered with a piece of fine muslin. The support for the tube has a delicate thermometer attached, to show the temperature of the external air.

This instrument gives the dew-point by direct observation, and is to be used at an open window facing the north in the following manner: Having fixed the tube on the stand, with the bulbs vertically downward, the aether is all caused to flow into the lower ball by inclining the tube. The temperature of the air is noted by the exposed thermometer. Then some aether is poured upon the muslin covered bulb. The rapid evaporation of the aether cools the bulb and causes condensation of the aethereal vapour in its interior. This gives rise to rapid evaporation of the aether in the lower bulb, whereby its temperature is greatly reduced. The air in the vicinity is deprived of its warmth by the cold bulb, and is soon cooled to the temperature at which it is perfectly saturated with the vapour which it contains. Cooled ever so little below this temperature, some aqueous vapour will be condensed, and will form a dew upon the black glass bulb. At the first indication of the deposit of dew the reading of the internal thermometer is taken; which is the dew point. In very damp or windy weather the aether should be slowly dropped on the bulb, otherwise the descent of the mercury in the thermometer is so rapid as to render it difficult to be certain of the temperature. Should this occur, the observation may be repeated by watching the temperature at which the ring of dew disappears, the mean of the two readings will be the correct point of precipitation. The greatest difference observed by Mr Daniell in the course of four months’ daily experiments between the external thermometer and the internal one at the moment of precipitation in the natural state of the atmosphere was twenty degrees. When Daniell’s hygrometer is required to act merely as a weather glass, to predict the greater or less probability of rain etc, the difference between the constituent temperature of the vapour (shown by the interior thermometer), and the temperature of the air (shown by the exterior thermometer), is all that is necessary to be known. The probability of rain or other precipitation of moisture from the atmosphere, is in inverse proportion to this difference”.

The maker, Newman is somewhat understated, he rarely figures amongst the best makers of the period and his history is somewhat less well known than his early Nineteenth Century counterparts however, he was a hugely respected figure during his time. Born in 1783, both he and presumably his brother George Newman were apprenticed to Philip Brock although there is also some association with a Robert Tangate to whom one or both may have been turned over to during this time. Tangate had previously been apprenticed to George Adams of Fleet Street so their education would have been of the highest quality.

Other Newmans of the period seem also to have some relationship with John but it is hard to unravel. This branch of the family were ultimately apprenticed through Tyco Wing who under Thomas Heath had been in turn apprenticed alongside George Adams and Troughton amongst other notable characters. A Thomas Newan also eventually took over the Heath & Wing business. The commonality of names seem too obvious to ignore but would need some further specific research.

John Newman gained his freedom in 1807 and traded initially from his birthplace in Camberwell, moving to Lisle Street in Leicester Square in 1812 from where he continued to trade until 1827 and from there undertook laboratory work, chemical supply and manufacture for The Royal Institution where he associated himself with numerous leading scientists of the age. Prior to his departure from this address, he was commissioned by the Royal Society to create a standard barometer which was perhaps one of his most successful and well known products used by numerous observatories for its pin-point accuracy. Later, in 1824 he provided instruments for Rear-Admiral Parry’s voyage to find the North West passage.

Regent Street was newly built in 1827 when Newman secured his premises at number 122 proving a significant rise in success during this period and he remained at this address until his death. Whilst trading from these premises, he served the likes of Charles Darwin for whom he made a portable mountain barometer to take with him on HMS Beagle, he manufactured instruments for the Ross Expedition and for the scientist, Sir Charles Wheatstone. Newman was also an exhibitor at The Great Exhibition where he gained special mention for his air pumps

He finally relinquished his position as instrument maker to The Royal Institution in the early months of 1860 and died in July of the same year. The business was sold shortly after by his son to the recently established Negretti & Zambra who took over the premises at 122 Regent Street and immediately made it their flagship London store.

The legacy of Newman’s work was continued by his apprentices Robert Murray and Charles Elliott. The former worked for Newman for most of his career until he finally departed to form Murray & Heath. This company specialised in photography which is perhaps unsurprising given that the upstairs premises at Regent Street contained a photographic studio run by Alexander Bassano and was frequented by Fox-Talbot during Murray’s career.

Charles Elliott needs little introduction, he left Newmans employ to join his Father’s business, William Elliott & Sons and later became one half of the hugely renowned, Elliott Brothers of The Strand.