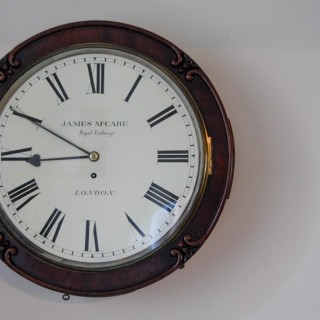 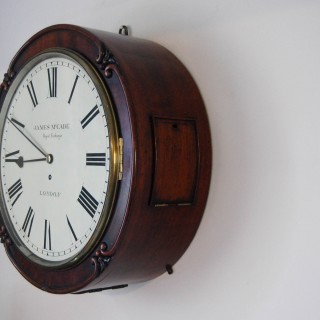 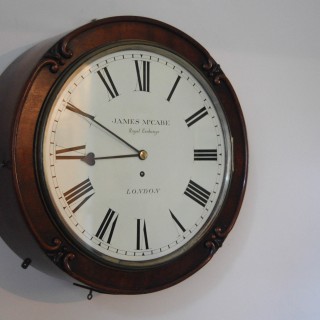 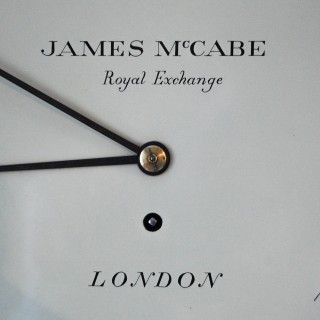 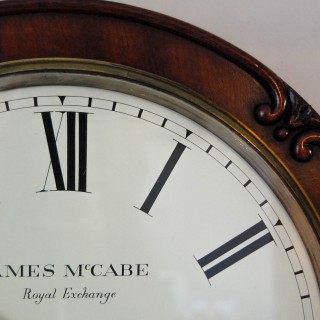 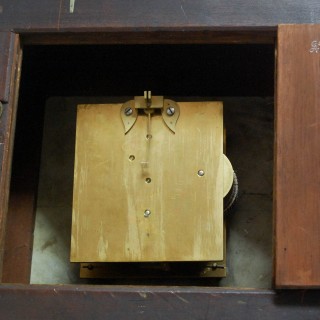 This beautifully executed clock is housed in a seventeen inch mahogany drumhead case with a unique foliate carved design to the surrounding edge. It has two inspection hatches, one to the side and to the base both using the same key. A larger door is provided at the back of the clock to allow access to the movement. A larger key is further provided to unlock the brass bezel to the side, which itself encloses a painted dial in superb condition with the name of “James McCabe, Royal Exchange, London to the centre.

The McCabe dynasty has its roots in Lurgan in Ireland where James McCabe was born in 1748. The family were already involved in the clockmaking trade at this point. First working with his brother Thomas in Belfast, James emigrated to London in 1775 and opened his business in Fleet Street. Six years later, he is listed as an Honorary Freeman of the Clockmaker’s Company and finally rose to the position of Senior Warden shortly before his death in 1811.

By 1802, the business had moved to 97 Cornhill, Royal Exchange and upon, James’s death was continued under the stewardship of his sons, James, Thomas & Robert. The firm was continued by the son of Robert McCabe, Robert Jeremy until 1883 at 32 Cornhill, Royal Exchange whereupon he refused all offers of sale and wound up the 108 year old business. Robert Jeremy retired to Newbury in Berkshire and died there in 1902.

McCabe clocks and watches were famed across the world during the period. They are known to have exported widely to India where their timepieces were held in the highest esteem and examples of their work were known to have been in the possession of Admiral Lord Horatio Nelson and the American President George Washington.

Everything about this clock reflects the care and attention lavished upon McCabe’s highest quality products, from the chain driven movement to the profile of the blue steel hands. The clock has been serviced by a BHI accredited horologist and is in complete working condition.