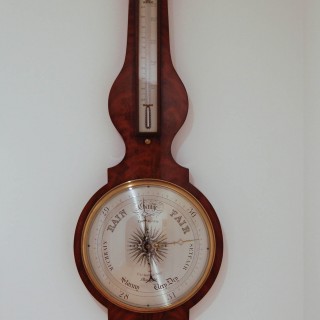 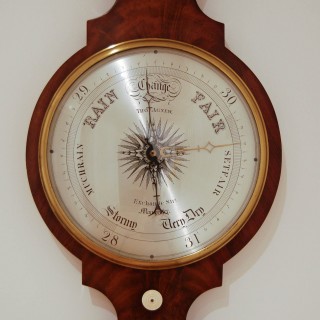 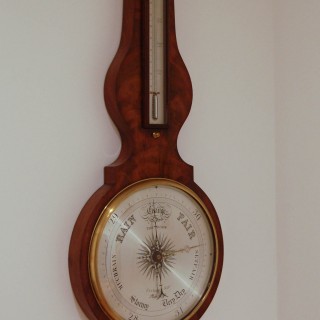 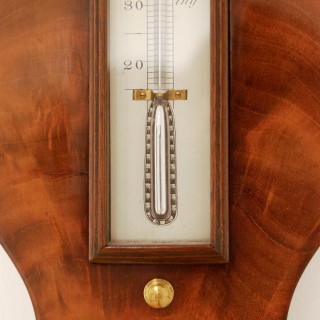 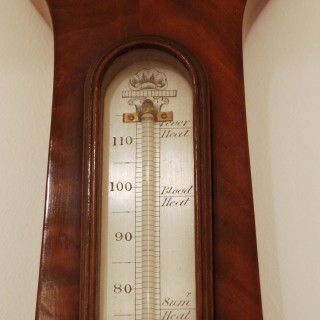 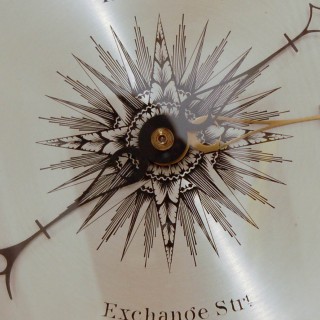 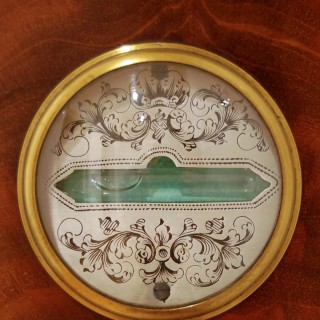 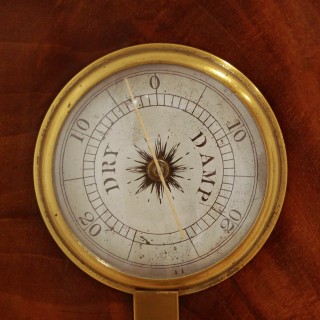 For sale, an exquisite example of an early Victorian mahogany wheel barometer by the world renowned Thomas Agnew of Manchester.

This uncommon design features a simply stunning flame mahogany body with an unusual rounded top with brass hygrometer and a 12 inch cased Fahrenheit thermometer with silvered scale below. Both of these features are removable in order to be used in other positions away from the barometer as required. The main 10 inch silvered scale measures 28 to 31 inches of barometric pressure and has weather indications on the inner side of the scale circumference. The maker’s name, “Thomas Agnew Manchester” is engraved above and below the centre.

The setting hand is operated by a bone setting key below the dial and within the rounded base is set a glass fronted spirit level with a profusely engraved and silvered surround.

This barometer is a joy to behold, it has an unusual shape, is finished with the finest mahogany veneers and the attention to detail is just superb. Of particular note is the engraving to all of the dials incorporated into this piece, they are of the highest quality for the period.

The company of Thomas Agnew can trace its roots back to the Italian migrants that arrived in Britain in the late eighteenth to early nineteenth centuries. The Zanetti brothers, Vittore and Viincent, like most, came from the Northern regions around Lake Garda and settled in Manchester in about 1795. Initially trading as Zanetti & Co, the brothers are considered to have parted company in about 1804 but continued to trade separately in the city.

On his own account Vittore Zanetti continued to run a successful business which not only included meteorological instruments but looking glass and frame making, carving, gilding, publishing and dealing in all kinds of antique curiosities. It was under these conditions that the young Thomas Agnew and the renowned Charles Joshua Ronchetti both worked and in the former case, served his apprenticeship. In 1817, Ronchetti left to set up his own successful business and Thomas Agnew went into partnership with his former master as Zanetti & Agnew where the business continued to trade in a similar way as before. Zanetti’s son Joseph joined the business in 1825, three years prior to his father’s retirement and return to Italy, and subsequently the business was renamed to Agnew & Zanetti in reference to Agnew’s seniority.

In 1835, Joseph Zanetti left the partnership in order to set up on his own account after which the business became Thomas Agnew. It is in this period of the company’s history that this barometer would have been manufactured and although Agnew began to slowly concentrate his focus on the selling of pictures and prints, it shows that the business still took the instrument making part of its business seriously.

By 1850, Agnew had taken his two sons, William and Thomas into partnership to become Thomas Agnew & Sons and by this time had begun to solely concentrate on the selling of art. This change of focus saw the company of Thomas Agnew & Sons rise to become pre-eminent dealers in works of art, and branches in both Liverpool and London followed with an eventual consolidated move to premises on Old Bond Street in London.

Throughout the nineteenth century, the Agnew brothers single-handedly revived the interest in Old Master paintings and acted as principal agents and advisors to museums, Royalty and to other high end clients such as The Rothschild dynasty. The Twentieth century saw a branching out into Impressionism and Modern Art and their affiliation with the upper echelons of the art establishment remains strong to this day.

In 2008, the company sold its premises on Old Bond Street and in 2013 was finally sold to Christie’s Director and Art Historian, Lord Anthony Crichton-Stuart after which the company was removed to St James Place in London. Under Crichton-Stuart’s leadership, Agnew’s Gallery retains its position as one of the most respected art galleries in the UK and perhaps the world.

A superb barometer in its own right but with a provenance that links it back to the earliest part of the Agnew’s business, its history is undeniably fascinating and has appeal to both collectors of scientific instruments and art collectors alike.