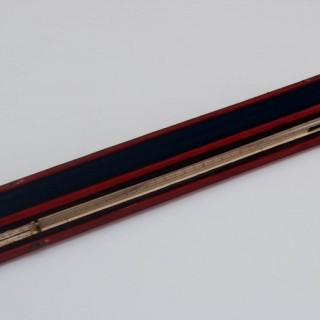 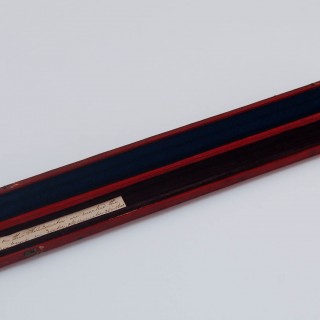 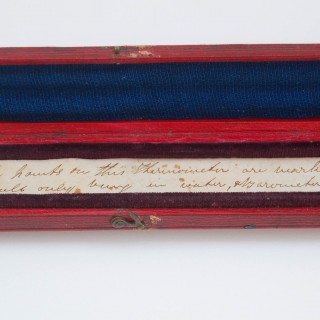 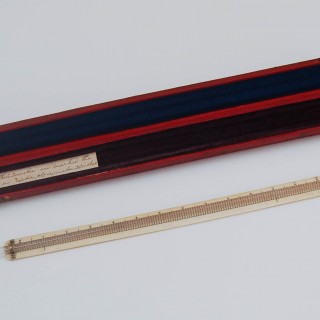 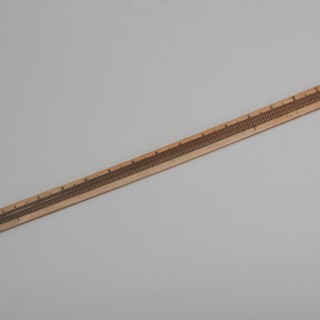 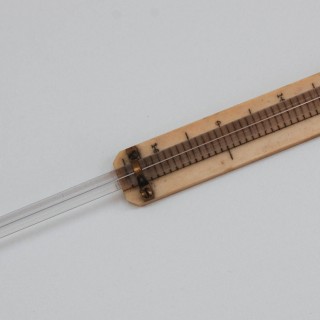 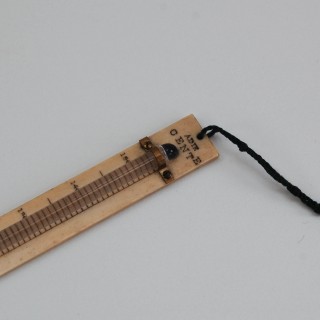 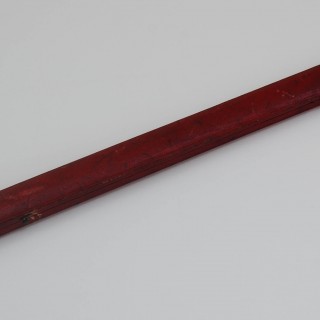 For sale, a large leather cased meteorological thermometer by Patrick Adie of London.

This unusually large example is comprised of a 29cm bone scale divided for -10 to 150 degrees of centigrade and with a 34cm thermometer that extends 5cms beyond the base of the scale. It is stamped with the maker’s name, “Adie” to the top with the abbreviation of centigrade (CENTE) below. A small hole at the top allows the thermometer to be hung in its chosen place for the purposes of measuring.

The beautifully constructed wooden hinged case is covered in red morocco leather with hook and eye fasteners to the side. It has a purple velvet sectioned interior to safely house the instrument and original green cushioned and patterned fabric to the lid.

Both the case and the thermometer are in superb condition.

The interior of the case has a small hand written note within it, stating, “the points on this thermometer are marked the bulb only being in water. My barometer 30 inches”. It is likely that this is note from the manufacturer to give guidance on how the thermometer was manufactured given that the boiling point and freezing points of water (zero and 100) are the reference points on which the Centigrade relies. The barometer reading is of importance as the density of the atmosphere at any given time will affect the point in which water boils. It is not a huge stretch of the imagination to consider that the note may have been written by Adie himself, or if not certainly a trusted member of his workshop but at this early stage in his career he is unlikely to have had a large roster of staff.

Thermometers of this type are known to have been manufactured as early as 1854 by which time (according to Meteorological Office records) Adie’s competitor, Louis Casella was supplying them to the Board of Trade. They were seen as superior for use in this field of science due to the understanding that a thermometer attached to a back plate would be more inclined to measure the temperature of the base it was attached to, rather than the pure temperature of the air. Patrick Adie by this time was himself hugely influential in meteorological circles for his close associations with The Kew Observatory.

It is also likely that this thermometer was intended for use in the measurement of liquid temperature, given the length of the scale is beyond the general bounds of atmospheric parameters and the point reflected in the note informing that the thermometer is devised with the use of water as the principle guidance for the scale.

The history of the Adie dynasty began in 1776 with the celebrated Edinburgh scientific instrument maker John Miller, the uncle of Alexander Adie. Miller himself had been apprenticed under the world renowned maker George Adams so Alexander was privileged to have had an uncle from such a prestigious background.

Following the sad demise of both partners of the firm, Richard Adie continued to run both the Edinburgh firm and his own concern in Liverpool until his eventual death in 1881. Himself an accomplished instrument maker, Richard was awarded a silver medal by The Royal Scottish Society of Arts for his developments in meteorological instruments and published twenty seven papers on philosophical instruments between 1837 & 1868. He also exhibited a vacuum steam gauge, an alcohol hermetic barometer and a double telescope at the 1862 London

The firm of Patrick Adie, the youngest of the brothers continued to flourish in London. Set up in 1844 after serving apprenticeships with both his Father’s firm and the gas engineers, Milne & Son, he also specialised in the production of meteorological instruments. Through contacts made during his apprenticeship and training at Sir Thomas MacDougall Brisbane’s observatory near Kelso, Patrick had close links with John Welsh Superintendent of The Kew Observatory. An international conference had taken place in 1853 for the purpose of promoting meteorological observations at sea and numerous recommendations were adopted by the British Government. They encouraged the Kew Committee of the British Association to develop some of these ideas and both Welsh & Adie worked together to develop the now famous “Kew Pattern” barometer, a fitting development to his father’s earlier work.

A very rare and early example of its type, circa 1850