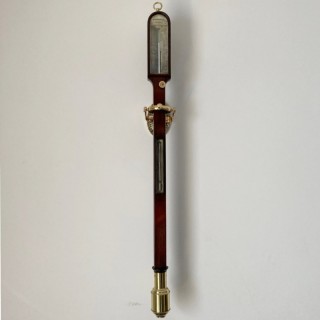 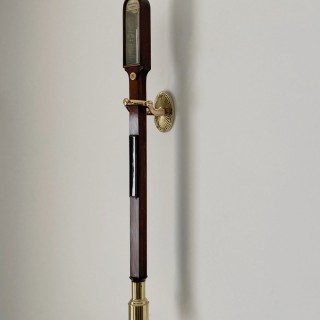 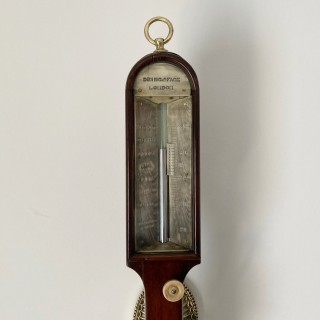 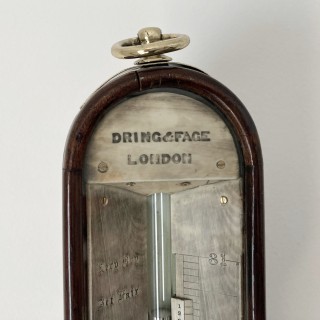 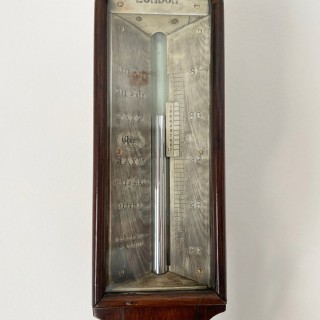 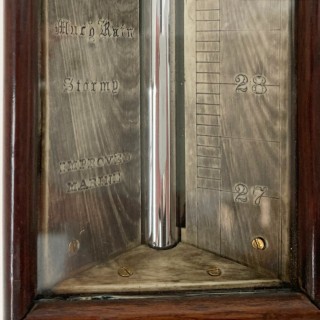 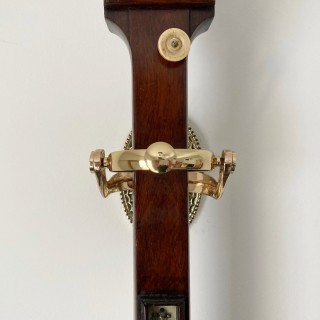 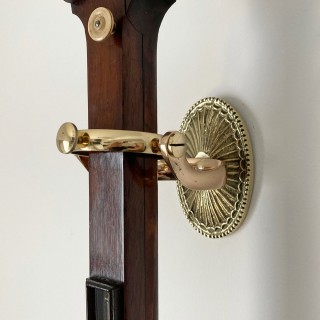 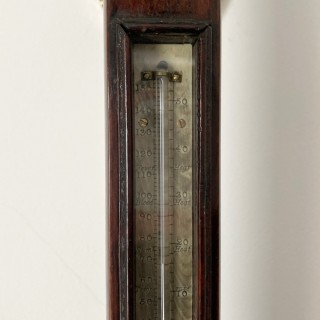 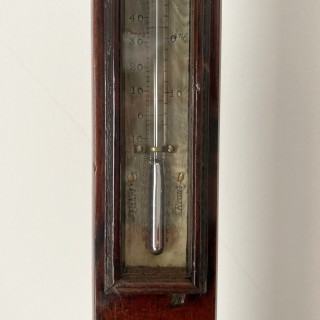 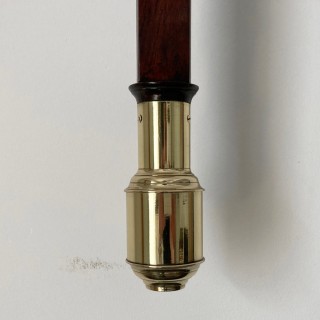 Comprised of a mahogany body with a dome top carrying the inverted two part scale and maker’s plate. The scale is engraved to the right hand side measuring 27 to 31 inches of barometric pressure and has a Vernier for fine measurement to the side of the tube which is hand operated by the set dial below. The left hand side is engraved with standard weather indications and the words “improved marine” to the base. The plate within the top domed section is engraved to the makers, Dring & Fage, London.

The straight square sectioned body has a cased and glazed thermometer with engraved scale for both Fahrenheit and Reamur. Between the thermometer and the set dial are holes front and back which receive the screws which secure a beautifully ornate brass gimbal. The barometer could be mounted to the wall by this means or could be hung by the brass hanging loop located at the top of the dome.

The cistern is protected by a graduated brass cover which is secured by screws onto the mahogany body at its base.

A super example of a second phase marine barometer (dome top) with a fantastic gimbal. Its manufacture slightly precedes the improvements that were made by Patrick Adie and the Kew Observatory in the late 1850’s which finally led to the metal tubular body design. You can see from the images that the scale has darkened over the years owing to the reaction with the mahogany but it remains perfectly useable and attempts at cleaning would likely cause more harm than good.

The partnership of John Dring & William Fage was established in 1790 although the company later advertised themselves as having been founded in 1745. The earlier date is accounted for by including the trading period of John Clarke, whose business John Dring purchased at the end of the Eighteenth Century from John Clarke’s son Richard who had in turn married Dring’s sister.

John Clarke had been famed for the manufacture of hydrometers and his instruments were widely used by the British Government throughout his later life. Dring & Fage continued to benefit from this relationship until 1803 when Bartholomew Sikes invented his improved hydrometer whilst at the same time there was growing discontent with the accuracy of Clarke’s instrument. A competition was launched shortly after by a Governmental panel which included scientists such as William Hyde Wollaston and representatives from The Excise Board. Sadly, Sikes died suddenly during this period and although it was widely recognised as a superior instrument, Sike’s widow had to petition until 1810 to finally be awarded The Excise Board contract. Robert Brettell Bate had established his business specifically to make Sike’s hydrometers in 1807.

Dring & Fage therefore held on to the valuable Government work until 1810 and finally regained the contracts after Bate’s death and the closure of the Bate firm by his son in 1850. From records of Dring & Fage’s representations to The Government during this period, it is clear that both of the founding partners were either retired or more likely had passed away. The company was now being run by Edward Hall and Edward Jenkin and from this point onwards, they maintained strong links with HM Customs, The Inland Revenue and Colonial Departments into the Twentieth Century.

Beyond Hall and Jenkin’s stewardship, the Company passed through Hall’s family line and became a Limited company in 1940. It finally closed in the 1960’s.

The barometer dates to circa 1840.