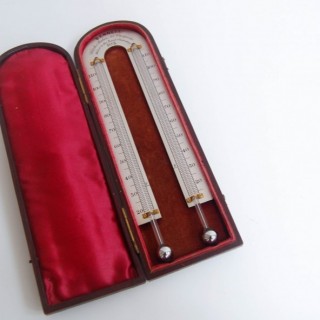 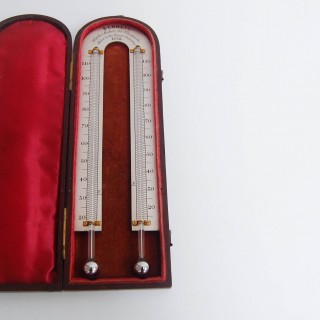 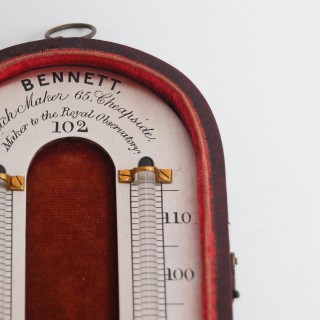 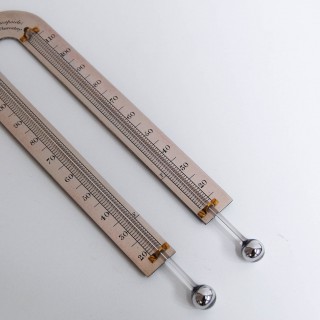 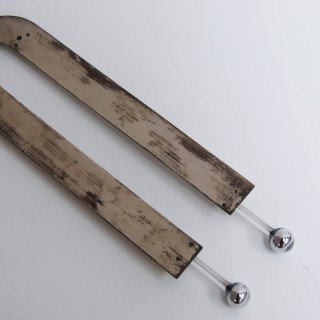 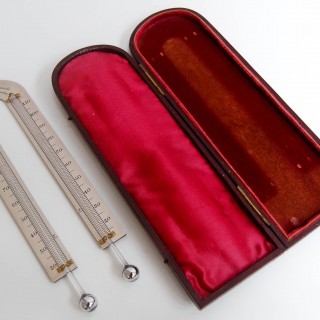 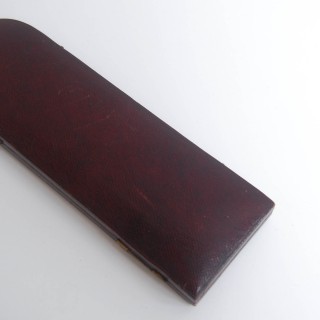 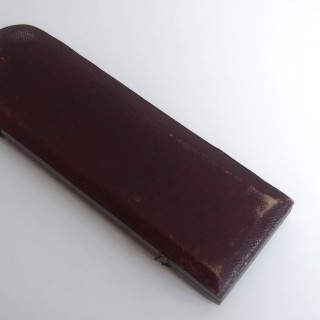 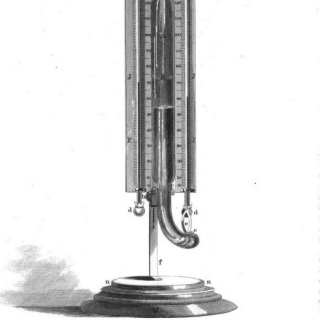 The instrument is comprised of two thermometers affixed by four brass clasps to a silvered U shaped scale plate. Both using a Fahrenheit scale, the left (dry bulb) registers 20 to 115 degrees whilst the right (wet bulb) measures from 15 – 115 degrees. The maker’s name is engraved to the top as follows, “Bennett, Watchmaker 65 Cheapside, Maker to The Royal Observatory”.

This rare and unusual thermometer set is contained within an immaculate red morocco leather case with original red velvet and silk lined interior. The hinged case is secured by two hook and eye catches which are both still present. As a testament to the craftsmanship of this piece, both catches are set upon brass washers to ensure that the movement of the catch does not rub the leather whilst being operated. This was a top quality instrument during its time and the care and attention is very evident.

Meteorological instruments such as these have a number of associated names, hygrometer meaning the measurement of moisture or water, the name psychrometer (cold meter) was used by the German inventor Ernst Ferdinand August (1795-1870) and during the same period in 1836, the Surgeon, John Abraham Mason was presenting his new, Mason’s Hygrometer. An article in the Record of General Science describes a “new hygrometer illustrated by experiments and a comparison of its results with Sir John Leslie’s”. Leslie had in 1805 developed an air thermometer based upon Galileo’s thermoscope. Sadly, Mason’s name is no longer commonly associated with his invention but its continued manufacture into the 1840’ and 50’s is testament to its superior accuracy.

This example by Bennett is a small portable version of the Mason’s hygrometer being incorporated into its own carrying case, a larger version with a stand is contained in the collection of The Museum of the History of Science in Oxford.

The maker John Bennett (later Sir John Bennett) came from a Greenwich watchmaking family. Following his father’s early death, he starting his own business at 65 Cheapside in 1847. He continued at that address but expanded the shop into the premises at 64 Cheapside in 1865. Bennett built his career on quality products backed up with the use of shrewd advertising and his purchase of Stand number 1 at The Great Exhibition and the advertisement on the title page of the Exhibition supplement bought him to the forefront of public attention.

The 1850’s marked continuing success for John Bennett’s business with him receiving a Royal Appointment from Queen Victoria in 1858, commissions from The Royal Observatory at Greenwich and from The Board of Ordnance. A flamboyant character with a proven flair for marketing, he installed his “Big Ben” clock at the Cheapside premises at the same time as the installation of the famous clock in Westminster and it is reported that the crowds were so large that the surrounding streets had to be closed down. Bennett’s version featured two huge automaton representing Gog & Magog, the fabled keepers of the City of London and following the demolition of the site in 1928, Henry Ford bought the structure and carried it back with him to America. It can still be seen at the Henry Ford Museum to this day complete with clock and automata.

Aside from his highly successful watch and instrument making business, Bennett became increasingly involved in public and civic duties serving as a liveryman for the Spectaclemakers, Clockmakers and Loriners Companies and as a council man for the ward of Cheap in London from 1862-1889. In 1871 he served as Sherriff of London & Middlesex and Lord Lieutenant of the City of London and was knighted in the same year by Queen Victoria at St Paul’s Cathedral whereafter the business was termed Sir John Bennett.

Sir John finally retired in 1889 and the company was turned into a limited concern and continued to trade well into the first the first half of the twentieth century. He died in 1897 being described in his obituary as a, “man of strong character, very eccentric, and one of the most familiar figures in London”.

This is a very rare and early example of a portable Mason’s Hygrometer from a highly regarded maker of instruments. Circa 1850.

Both the case and the instrument are in excellent condition