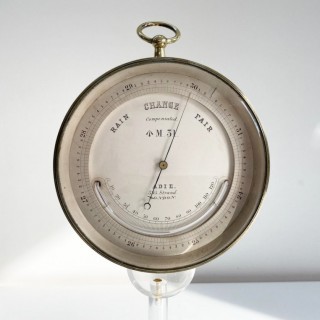 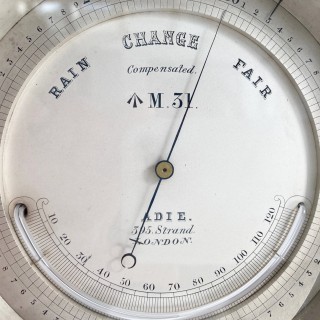 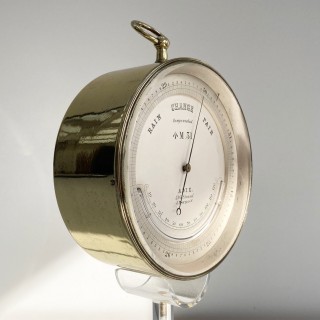 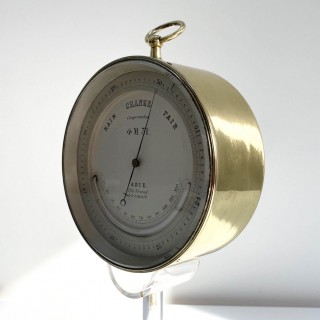 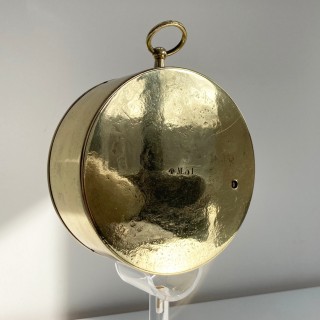 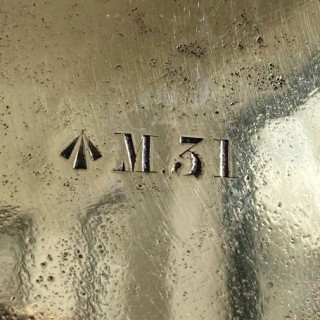 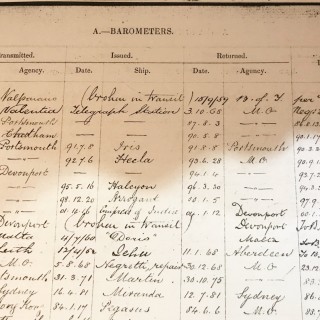 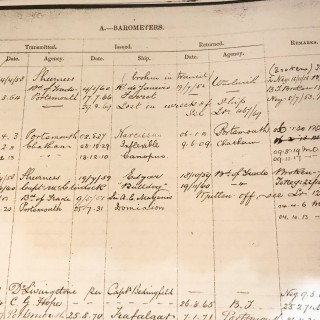 One of the best aneroid barometers I have had the pleasure of presenting recently, it is comprised of four and half inch split level silvered dial with long pressure scale around the outer ring measuring 24 to 31 inches of barometric pressure. The lower dial is provided with simple weather indications stating rain, change & fair and the word compensated to denote it compensation for temperature. The upper section is also provided with the Governmental broad arrow sign and the early Met Office serial number of M31. The lower half has a delicately curved Fahrenheit thermometer with beautifully engraved scale reading for 10 to 120 degrees and above is the maker’s name, Adie, 395 Strand, London. The barometer is also fitted with an extraordinarily thin, blue steel pointer with Breguet style crescent moon design at the back end and culminating to an extremely fine point to allow for precision reading.

The drum type brass case has a hanging loop to the top and the reverse is stamped with the same broad arrow and serial number as is engraved on the dial (M31) and adjustment screw at the 4 o clock position. The fine bezel and shallow bevelled glass follow the contours of the main case and a finely knurled brass edge allows a set pin to be rotated on the inner dial edge to allow recording of pressure at any given observation point.

I have also been lucky enough to find records of M31 in the Met Office archives (see images attached) which trace the history of the barometer from it incarnation in 1859 through to its final release in 1905. Its initial issuance saw it broken in transit and was repaired and serviced by Negretti & Zambra before it was released for use at various telegraph stations in Valencia, Portsmouth and finally Chatham in 1890. Once returned it saw much service aboard various ships including the Iris (1891), Hecla (1892 – 1894), Halcyon (1895 – 1896), Arrogant (1898 – 1900), Empress of India (1901 – 1904) and finally on Dominion in 1905. Interestingly, The Met Office records do not show a return date for M31 so it may have retained by The Captain or written off at this point. HMS Dominion ran aground in 1906 at the Gulf of St Lawrence and repairs took over a year to complete, so this may be the reason for the lack of final records. A very interesting working history, which is ripe for much deeper research.

The maker of this precision barometer, Patrick Adie set up his business in 1844 after serving apprenticeships with both his Father’s famous Edinburgh firm (Adie & Son) and the gas engineers, Milne & Son and specialised in the production of meteorological instruments. Through contacts made during his apprenticeship and training at Sir Thomas MacDougall Brisbane’s observatory near Kelso, Patrick made the close links with John Welsh Superintendent of The Kew Observatory that would eventually lead to the creation of the famous Kew Pattern marine & station barometers which were used extensively by The Met Office for years to come, a fitting development to his father’s earlier invention of the sypiesometer.

A very scarce early Victorian Met Office registered meteorological instrument from one of the top scientific instrument families of the Nineteenth Century, with a traceable working history across both telegraph stations and aboard ship.