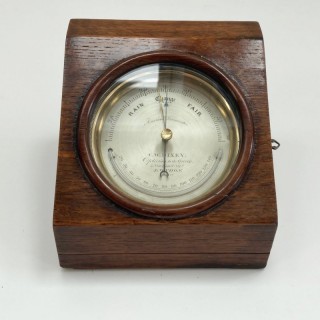 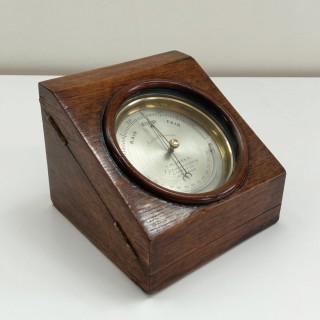 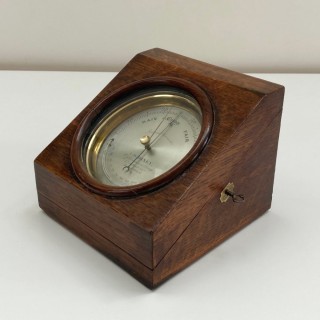 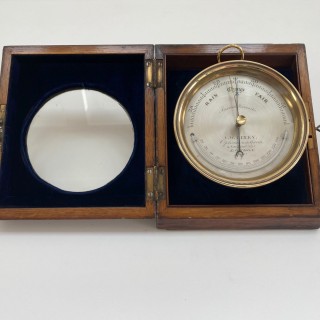 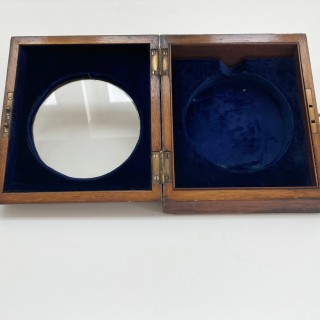 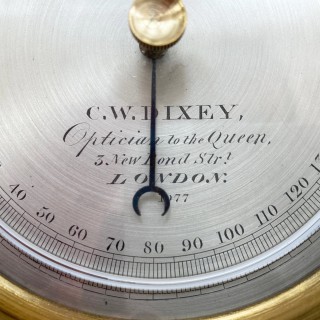 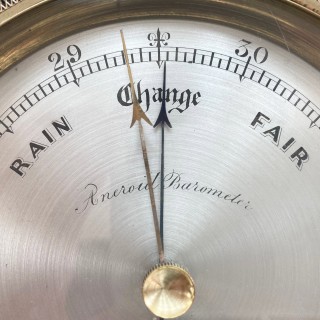 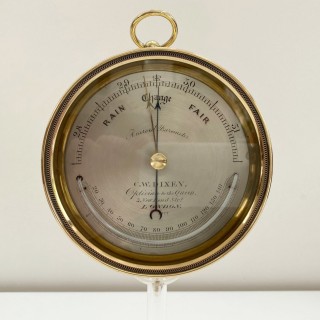 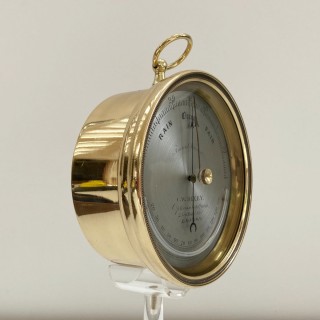 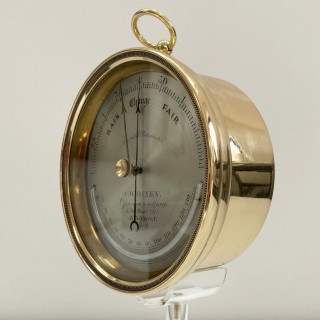 Of super quality, this barometer is housed in an oak hinged case with sloping front and green baized base. The circular glazed window in the lid is further accentuated with an oak surround providing contrast and a perfectly subtle indication of quality and attention to detail. The interior of the case is upholstered with a dark blue velvet to both the lid and the base and remains in super condition. It also retains a working lock and key.

The fitted interor secures a super quality brass cased aneroid barometer with a half circle silvered scale measuring 28 to 31 inches of barometric pressure and Vidi type weather indications to the inner circumference. The centre of the dial is beautifully engraved to “CW Dixey. Optician to The Queen, 3 New Bond Street, London” and serial number 1077. It is engraved with the words “Aneroid Barometer” above, something that may not have been entirely obvious in the early years of its manufacture. The lower half of the dial is also fitted with Fahrenheit thermometer with an engraved scale measuring 20 to 140 degrees. The barometer is complete with blue steel “Breguet” type pointer and a brass arrow head set hand.

The engine turning detail to the circumference of the bezel is reminiscent of the earliest Vidi barometers retailed by EJ Dent which gives a good indication of its early date.

This truly exquisite example was made by Charles Wastell Dixey or CW Dixey which still trades today as a manufacturer and retailer of high end spectacles. The story of the dynasty however, is comprised of two strands of history. The present company’s history on its website is told in relation to the premises at 3 New Bond Street of which the company of G&C Dixey took over in 1825 from William Hawks Grice. Grice had traded at that address from 1818 to 1823. He in turn had taken over the business of the Fraser family in 1818.

The Fraser family had been in business as instrument makers from the 1770’s and are listed at 3 New Bond Street from about 1780. Started by William Fraser, his son Alexander joined the business as William Fraser & Son in 1805 and upon William’s death in 1812, the company was finally listed as just Alexander Fraser. William was a renowned maker and had received a Royal Appointment from George III, an accolade that Alexander kept after his father’s death. The reasons for the Fraser family selling to Grice is unclear but Grice himself seems to have continued the association with the Royal Family according to his, “description of the new improved self-registering thermometer” published in 1818 and from drawing instruments still contained within the Royal Collection. He is also described as a member of the City Philosophical Society and is listed as a contributing member of The Society of Arts in 1820 and 1823. According to the CW Dixey website, Grice is described as an assistant of the Fraser business and some records show him to have been apprenticed to the family business before he bought it. It also makes some reference to Grice having brought the business into ill-repute for having used it as a gambling den but I can find no record of this story. If true, it would explain his short tenure at the property but his membership of notable societies and his continued relationship with the Royal Family would suggest that he was a reputable instrument maker before this time.

Whether it was for reasons of criminal activity or not, the business was eventually sold in 1825 to George & Charles Wastell Dixey. George Dixey is known to have been apprenticed to George Wilson and Charles Wastell Dixey to his father Edward Dixey and Edward’s earlier records of trading form the second strand of the Dixey family story.

Edward’s history is somewhat difficult to unravel, he was born in 1772, the son of John Dixey a victualler or publican in Vine Street, Piccadilly and Catherine Dixey (nee Harris). According to most records, he is considered to have been apprenticed to George Linnell or George Black but more recent research by Anita McConnell shows Edward Dixey to have been apprenticed on the 4th September 1787 for seven years to the top instrument maker Jesse Ramsden at a cost of £21. A Christie’s sale record for a Wilson & Dixey telescope is also marked, “late apprentice to Jesse Ramsden” so the corroboration of these two facts seems to prove undeniably that his training was of the highest quality.

By the 1790’s (presumably after his apprenticeship in 1794) Edward is listed as working independently at Vine Street in Piccadilly and at the start of the 1800’s business addresses on Oxford Street and at Wardrobe Place are also listed. It is again unclear when, but a partnership was agreed during this period between George Wilson (also spelt Willson) and Edward Dixey to form the company of Wilson & Dixey.

Perhaps due to the numerous premises listed across London during the same period, this short-lived partnership seems to have failed quite rapidly and in 1803 both of the partners are listed under bankruptcy proceedings records with a dividend of £10 associated to the business. Despite their issues with debt, the company was able to maintain trading until 1809 but their increasing debt continues to be recorded throughout.

After 1809, Edward Dixey held various addresses at 335 Oxford Street, Air Street, Piccadilly and at Southwood Lane in Highgate according to a petition of insolvent debtors dated to February of 1824. These are probably his home addresses and records indicate that his trading address was at Oxford Street. There is a tantalising record for an 1817 legal case, Wilson vs Dixey (C13/2509/33) which may bring further light to the history of these ongoing financial difficulties, however, in 1812, his son, Charles Wastell was apprenticed to him and it is likely that George (Edward’s brother) was also working at the firm as the addresses for George in the records match closely to Edward’s known premises.

In bringing the two strands of the story back together, the partnership of G&C Dixey (George & Charles) was formed in 1822 at 78 New Bond Street where it traded for two years and then in 1825, it took over the Fraser family’s original premises at 3 New Bond Street. Charles would have finished his apprenticeship with his father by 1820 and George having traded independently may have seen an opportunity for reviving the family business. Instruments from this partnership are engraved variously with “twin sons and successors to Edward Dixey”, “Late Fraser” and “opticians to the King” (from whom they received the honour in 1824) so they obviously saw equal benefit in advertising their various heritages. The pair continued to trade at the New bond Street address until just after the death of George in 1838 (Tallis has G&C Dixey trading from New bond Street in 1840) by which time according to the engraving on their instruments, the company had already become “opticians to Her Majesty” Queen Victoria.

Thereafter the business was continued under the most famous name of Charles Wastell Dixey (CW Dixey) and it continued to serve royalty (both British and foreign) and wealthy patrons from its New bond Street premises and took part in the Great Exhibition at Crystal Palace in 1851. By the early 1860’s Charles changed the name to CW Dixey & Sons to incorporate his sons Charles Anderson and Adolphus William although Charles died shortly after in 1867 whereafter it became CW Dixey & Son.

Upon Charles Wastell’s death in 1880, the business continued to be run by his son Adolphus and both he and his son Walter received successive Royal warrants from Queen Victoria with the last being awarded by George VI in 1940 after the company had finally fallen away from direct family ownership. Churchill was perhaps their most notable patron during this latter period and had numerous pairs of spectacles made for him throughout his life. It maintained high street optical practices until 2009 after which time it moved away from direct retailing and its glasses are now stocked by numerous boutique opticians across the globe.