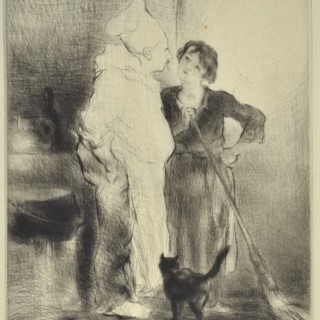 Signed in pencil and number 57/100; signed and dated in the plate: Jan 1931
Drypoint
Unframed, in mount only

Edmund Blampied is one of the Channel Islands most significant and best known artist artists.. Greatly versatile, he worked as a painter, illustrator, and occasional sculptor, although is best remembered as a printmaker. He was born on a farm in the Parish of St Martin, Jersey, on 30 March 1886, the youngest of four sons of John and Elizabeth Blampied. His father died five days before he was born, and his mother brought up the family, working as a dressmaker and shopkeeper in the Parish of Trinity. His first tongue was the Norman language of Jèrriais.

During the 1920s and 30s, Blampied worked extensively as an illustrator, contributing to numerous magazines, especially The Bystander and The Illustrated London News, and illustrating a number of books.

Though Blampied put his hand to a variety subjects, the most dear are his scenes of domestic idiosyncrasy that depict life on the farm and small town and those that show the bond that develops between people of a close knit community. He was a keen observer of everyday life who clearly enjoyed the quirks of human nature, even within amusing stereotypes. Blampied’s humor is as precise and delicate as his line work. His charming depictions rendered in a flourish with a skillful hand, float in and out of existence on the page like a cherished memory. Rather than offering biting criticism, he is rye, with a jovial nature better likened to the mild ribbing of a family member. Across the wide range of characters Blampied put his hand to, each one is evidence of the artist’s sincere affection for the modern human, imperfections and all.