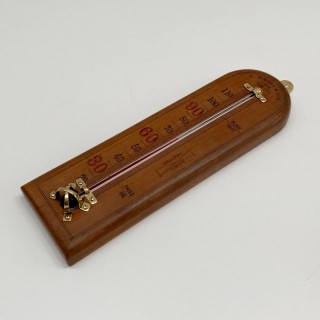 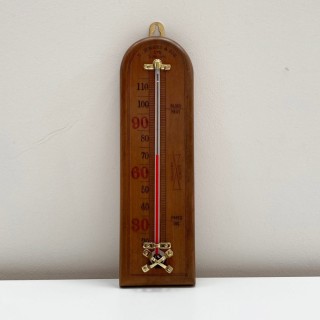 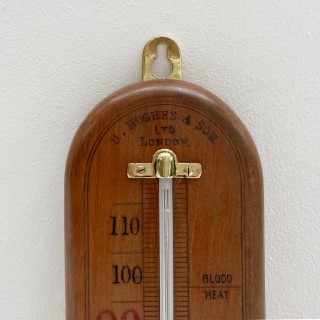 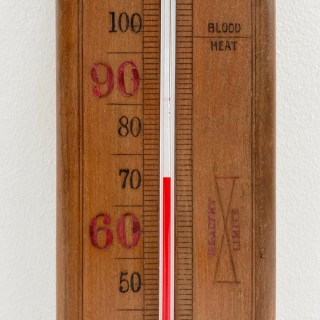 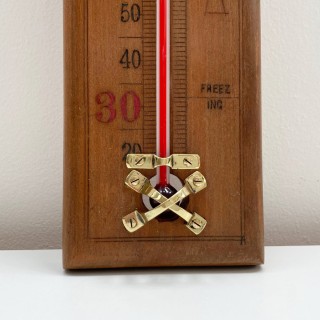 For sale, an Edwardian wall thermometer by Henry Hughes & Son Limited of London.

Comprised of an eight and three quarter inch wooden base with a lovely bright red spirit thermometer to the centre. The printed Fahrenheit scale measures from 20 – 110 degrees to the left and provides temperature indications to the right. The dome top is further marked to the maker “H. Hughes & Son Ltd”.

The thermometer is retained with a brass clip to the top and bottom and the bulb is protected by two further clips set diagonally across one another. The aperture for the bulb on the scale plate is cut through the entire body in order to try and retain correct readings against air temperature and thus avoiding the instrument being affected by the temperature of the wood.

The retailer Henry Hughes came from a long line of London clockmakers but his scientific instrument making business was established in 1838. Noted for its life size wooden figure of a seaman with sextant displayed outside the front door, Hughes premises at Fenchurch Street was a popular destination for merchant and Royal Navy seaman alike and Hughes gained much business from the Admiralty in the nineteenth century due to the quality and precision of his instruments. The founder died in 1879 leaving the business to his son Alexander and it was later incorporated as Henry Hughes & Son Ltd in 1903 and ran successfully until its premises were destroyed during the blitz in 1941. Owing to the devastation, Hughes entered into a collaboration with Kelvin, Bottomley & Baird in the same year and later amalgamated in 1947 to become Kelvin & Hughes. They continue to operate to this day under the name Kelvin Hughes Ltd under part ownership by ECI Partners.