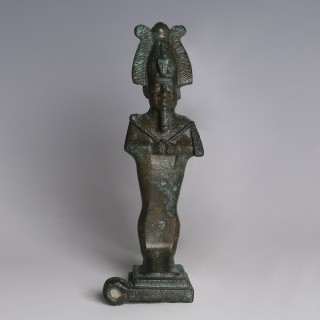 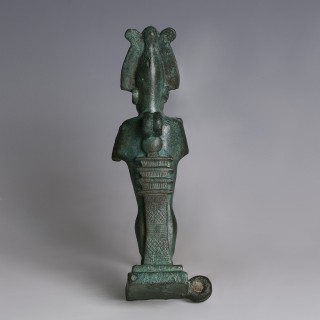 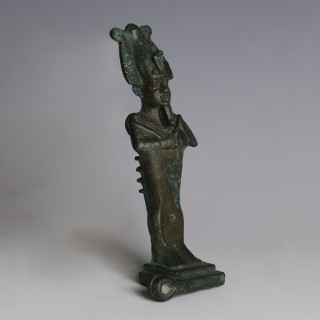 A finely modelled Egyptian bronze statue depicting the mummiform god Osiris wearing his standard attire, a close-fitted shroud. His wrists and hands poke out of vertical slits and meet in the centre of his body, just below his chest. He grasps a flail (nekhakha) in his left hand and a short-handled crook (heka) sceptre in his right hand. Osiris also wears the atef crown (consisting of the Upper Egyptian white crown flanked by two lateral plumes and a uraeus, whose body extends up the crown). His body is mummified and presented on a square block base. The back depicts a djed pillar starting at the base and finishing at Osiris’s chest. Unusually two rounded suspension loops have been applied to the reverse of the statue.

Osiris was one of the most significant and important god in the Egyptians pantheon. He is known largely as a god of fertility and of death, becoming god of the underworld. He is usually depicted as a green-faced man, to declare his association with the dead. He appears dressed in a burial shroud and wearing the Atef crown. In his role of lord of the underworld he was associated with each pharaoh as he died and thus iconographically was portrayed as a deceased pharaoh, as he is depicted on this figurine.

Within the Osiris Myth, it is believed that Osiris was a fair and just ruler who was overthrown by his jealous brother, Set. Tricked into a custom-made shroud, Set seals Osiris inside the coffin and flings him into the Nile. The coffin, swept away by the water, finally ends its journey at Byblos. Running aground, a tree takes root around the coffin, encasing it further within its trunk. The tree was eventually cut down and placed in the ruling King and Queens palace, who marvelled at its sweet aroma and rapid growth. Isis, on the search for her husband, reaches Byblos and having made her presence known, asks for the return of the pillar. She was thus able to release her husband from his wooden shroud. In the aftermath, the pillar was consecrated and venerated. This pillar became known as the djed pillar and was firmly established in the New Kingdom as a symbol associated with Osiris. It is thought to represent the actual spine of the god, hence the depiction of the djed pillar to the reverse of the statue. It was an amulet placed on the mummified body and usually made from green or turquoise faience and stone. Such colours were also associated with regeneration and re-birth in the afterlife.