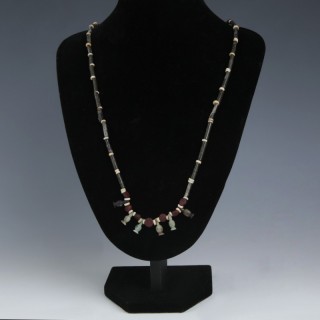 A beautiful Egyptian restrung necklace, composed of white faience beads, alternated with cylindrical-shaped blue faience beads, displaying aesthetically pleasing differentiation in their shades of dark blue. The necklace is further enriched by six larger beads in the shape of poppies, which are made from a selection of dark blue and light green hardstone. Each poppy bead is framed by white and red faience beads.

Poppy or thistle amulets were representative of healing and the removal of pain. Thistles were common all over Egypt, but especially around the Nile. It is thought that they were peeled and boiled before consumption, with the thistle used in some parts of the world as a herbal treatment for hepatic disorders. If, on the other hand, the amulet is intended to represent a poppy, the piece retains symbolic significance. Indeed, there is evidence for the extraction of morphine from poppies in the ancient world.
Date: 1550 – 1070 BC