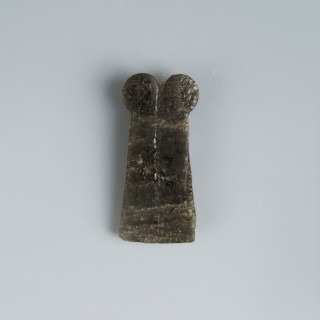 A black hardstone amulet in the form of a double ostrich feather. The front is flat with a shallow central groove delineating the two plumes. Reverse with vestigial solid suspension loop.
The Egyptians wore amulets alongside other pieces of jewellery. They were decorative, but also served a practical purpose, being considered to bestow power and protection upon the wearer. Many of the amulets have been found inside the wrappings of mummies, as they were used to prepare the deceased for the afterlife. The wearer of a double plumes ostrich amulet would have been imbued with divine dignity and majesty.