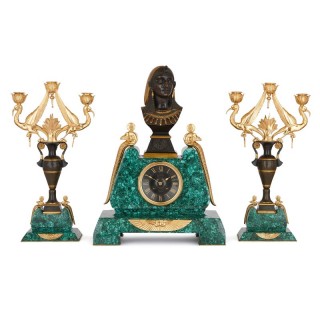 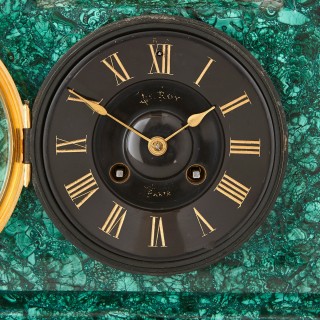 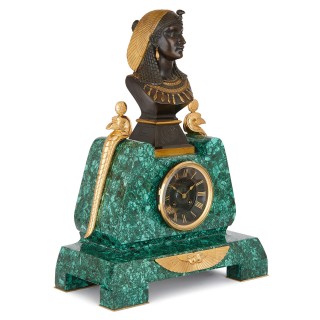 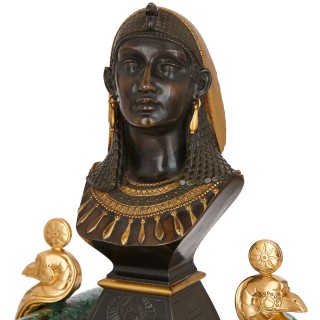 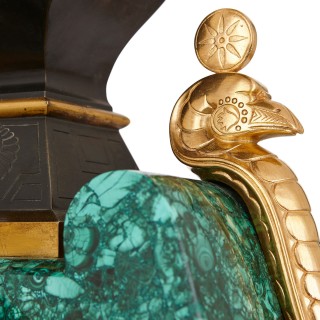 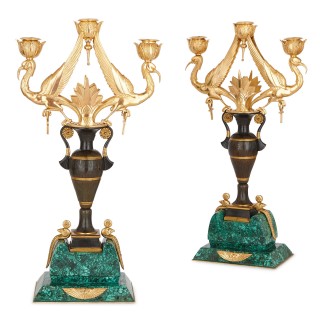 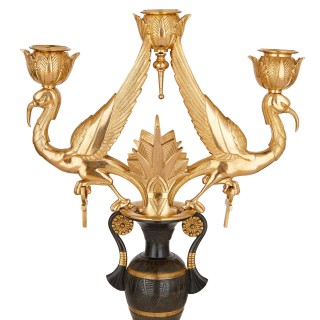 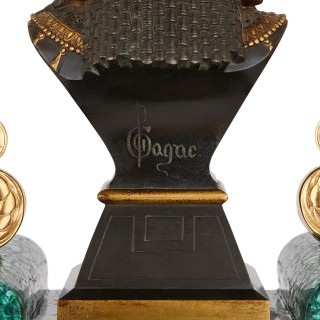 This magnificent clock set is signed ‘Le Roy’, most likely for Le Roy et fils. Founded in 1785, Le Roy et fils was an acclaimed French clock-making firm, which was run by Basile Charles Le Roy in partnership with his son, Charles-Louis Le Roy. Le Roy et fils supplied fine clocks and watches to important figures in Europe, including the French Emperor Napoleon I.

The three-piece clock set (comprised of a clock and a pair of candelabra) is designed in a majestic Egyptian Revival style. The clock is topped by a patinated bronze bust of an ancient Egyptian figure, wearing gilt jewellery and headdress. The bust is positioned on a short plinth, which is engraved on its front with a scarab beetle, and signed on its reverse ‘P. Gagac’. The sculpture is placed on a shaped clock body, which has been (recently) veneered in the green gemstone, malachite. The shoulders of the body are mounted with gilt bronze (ormolu) forms with serpentine bodies and falcon heads crowned with sun disks. A circular black marble clock dial, with gilt Roman Numeral hours, is centrally placed on the front of the body, contained within a circular gilt bronze case. The shaped body is set on a rectangular malachite plinth, which is decorated with a gilt bronze winged sun mount and placed on four block feet.

A pair of candelabra flank the clock. Each candelabrum features three gilt bronze leafy candle-holders, supported on the heads and outstretched wings of a pair of Egyptian ibis birds. In each, the two ibis stand either side of a stylised palmette motif, and they hold ankh (ancient Egyptian symbols for life) in their talons. The birds stand on Egyptian twin-handled patinated bronze vases, which are parcel gilt. These vases are set on shaped malachite blocks, decorated with gilt bronze falcon head snake mounts. The blocks are placed on rectangular malachite bases, which are mounted with gilt bronze winged sun motifs.