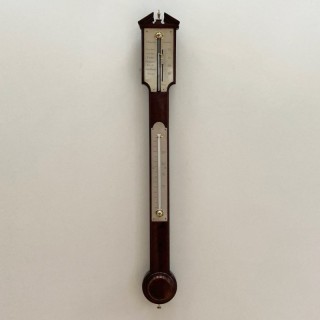 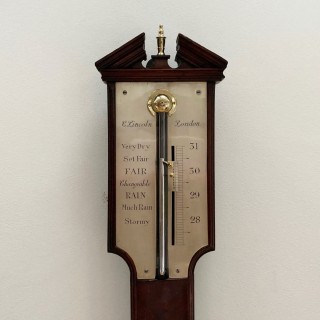 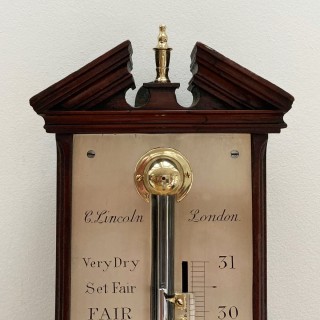 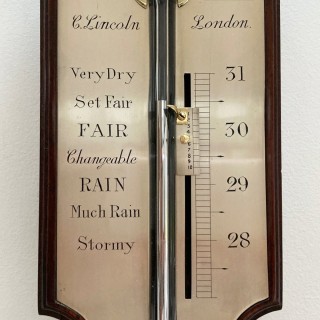 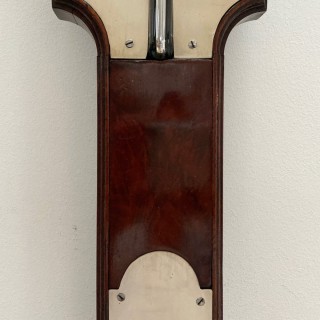 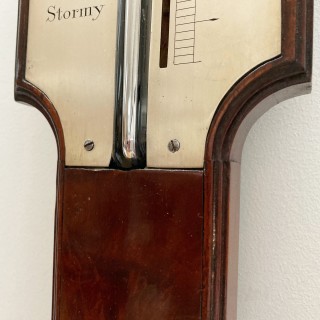 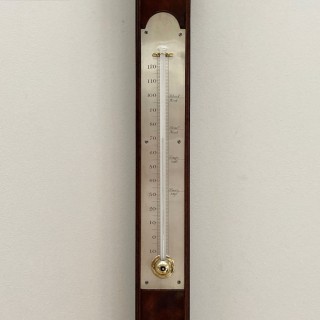 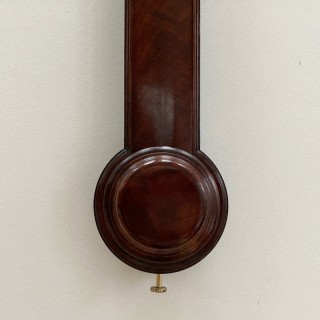 For sale, an Eighteenth Century mahogany stick barometer by Charles Lincoln of London

A very interesting barometer with broken arch classical pediment and brass urn finial over a large silvered scale plate measuring 28 to 31 inches of barometric pressure to the right hand side of the barometer tube with hand operated Vernier for precise measurement and the left hand side bearing standard weather indications. The head of the scale plate has a brass dome to retain the top of the barometer tube and below is engraved with the maker’s name, Charles Lincoln, London.

The trunk of the barometer is dominated by a thirteen inch, dome topped and silvered thermometer scale measuring -10 to 120 degrees of Fahrenheit with temperature indications such as, Freezing, Temperate, Summer Heat and Blood Heat and similar to the barometer scale, a protective brass dome is incorporated over the thermometer bulb with a hole cut to the front to account for air circulation.

The flame mahogany trunk terminates into a graduated, circular cistern cover which complements the reeded edge that runs around the edge of the body and a brass travel adjustment screw.

Perhaps the most technically interesting feature of this barometer is the skill with which the barometer tube itself has been designed and created. Rather than a straight tube, the design of the barometer demands that the tube is cranked backwards into the trunk at the base of the scale plate in order for it to provide room for the mahogany front and the large thermometer scale. The glassblowing skills required to create this feat are simply astounding and are testament to the abilities of this maker.

The manufacturer of this instrument, Charles Lincoln traded from 1765 to 1804 in various premises in Leadenhall Street. His Father Thomas Lincoln (under whom Charles trained), was himself a renowned maker who served as the Master of The Spectacle Maker’s Company from 1746 – 1747 and his death coincides with Charles’s early trading period, suggesting that he took over an already respected business. He succeeded to his Father position in The Spectacle Maker’s Company for the three years from 1787 – 1790 and was known to have had numerous apprentices notably Charles Silberrad and William Cox, the latter being turned over to him from John Cuff.

Excepting his large achievements during his lifetime, Lincoln’s trading life is as yet only lightly documented. His instruments and those of his apprentices however, continue to speak very well for his abilities as an instrument maker.

A very well proportioned stick barometer designed in a similar vein to those produced by his contemporaries, Dollond and Nairne & Blunt. This would have been an expensive instrument for its time.