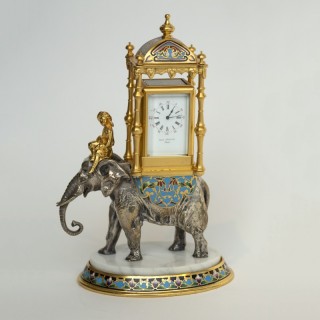 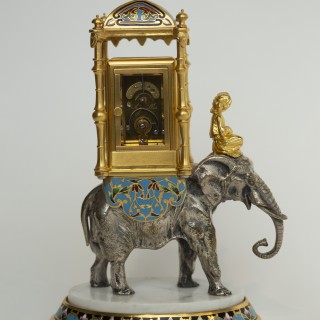 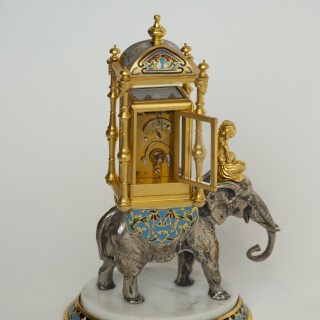 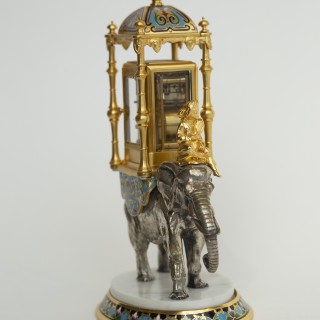 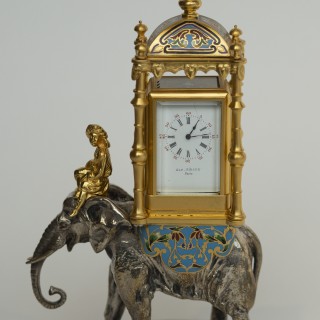 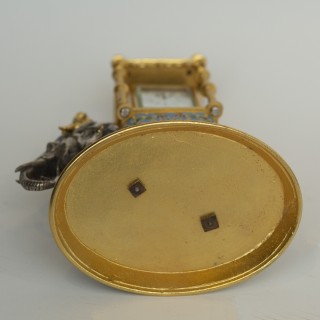 Dating from c.1860 and standing at only 8 1/2 inches tall this is an exquisite and rare piece from the Maison Alphonse Giroux, an important Parisian artisan and seller of goods at the height of luxury.

It is presented for sale as the maker intended it; the elephant has been re-nickeled, the howdah and mahout are regilded and the clock movement overhauled.

The well cast nickel-plated elephant bears a gilded hathi howdah, the gilded columns of which support a cloisonné enamel cupola, matching the enamelled ‘cloth’ on which it rests.  The Mahout, or elephant driver, is also gilded, and rides casually on the elephant’s head.

The howdah encases a miniature French carriage clock. Whilst it is free of the base, the carriage clock case is entrapped by the columns. The case is of one-piece form with beveled glasses to five sides, the whole only 2 1/2 inches tall. The 8-day timepiece movement has the original platform escapement, and the movement is overhauled and guaranteed for 3 years. The white enamel dial has black Roman hour numerals and red 5-minute Arabic numerals. It is signed ALP. GIROUX, PARIS. The dial has a hairline crack, barely discernible among the riot of detail surrounding it.

The elephant stands on an oval white cararra marble plinth, set in a gilt enameled base.

In 1838, Alphonse-Gustave Giroux (circa 1810-1886) took over the business, ‘Maison Alphonse Giroux’ that had been founded by his father François-Simon-Alphonse Giroux (circa 1775-1848) in 1799. He had established the business as an art restorers and manufacturer of exquisite furniture and luxury goods, which were very well-received by the French royal families of Louis XVIII, Charles X, Henri V and Napoleon III, amongst others. In 1839, Giroux was awarded the silver medal at the ‘Exposition des Produits de l’Industrie Française’, also executing work for the Exposition Internationale of 1855. A similar clock by the same maker sold at auction in Vienna in April 2017.