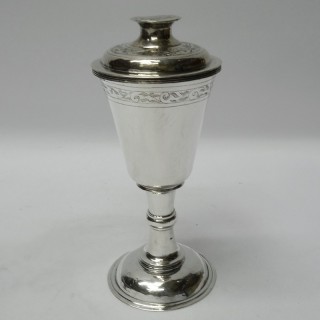 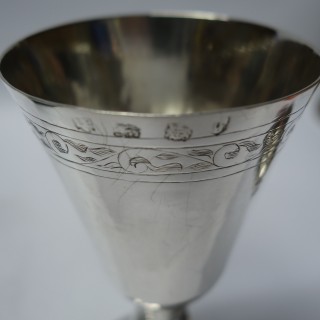 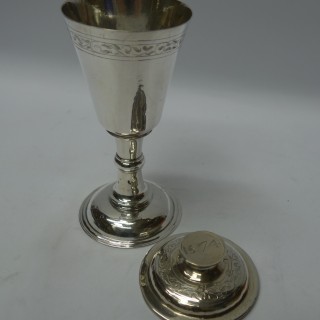 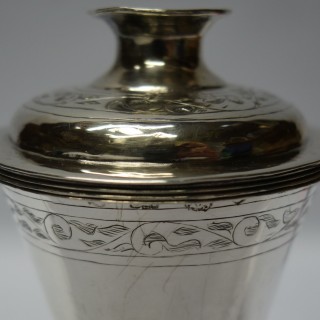 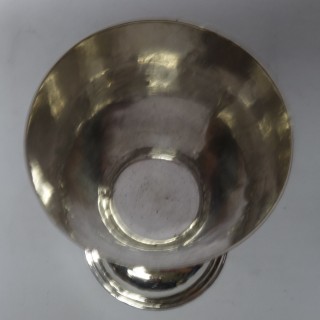 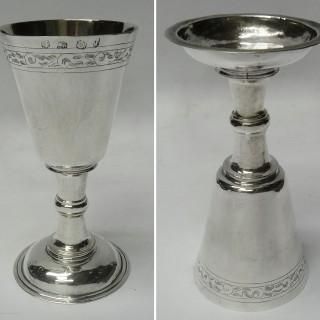 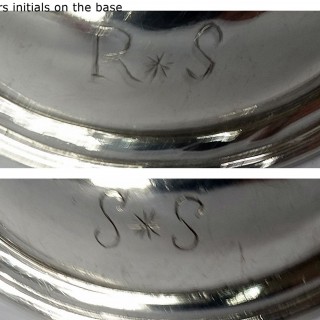 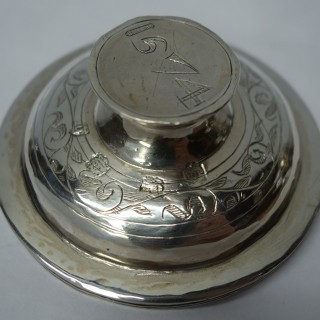 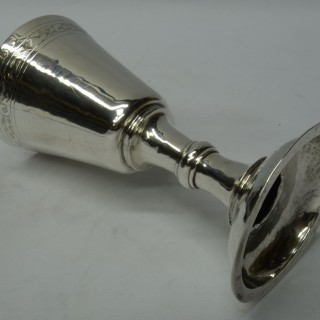 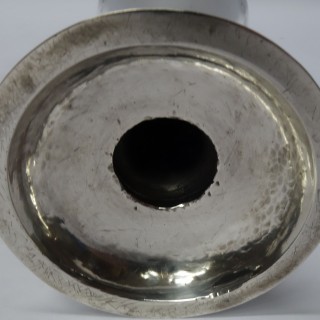 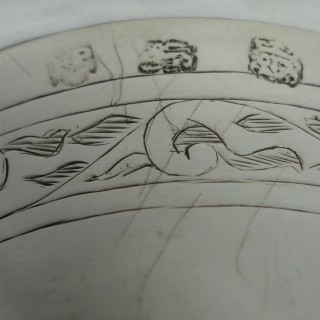 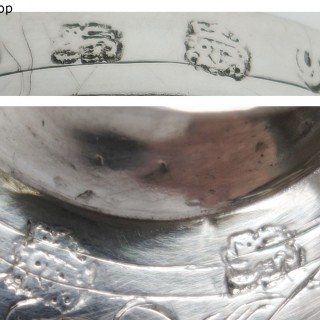 An extremely rare early English chalice with its matching paten dating to the reign of Elizabeth I. It is quite remarkable to find a piece of silver of such an early date and especially in such excellent condition. This cup follows the standard design for Elizabethan communion cups and is most likely to have been made from pre-reformation silver. The hatched decorative band below the top edge of the cup is typical for the period. Simple foot wires around the base and scratched owners initials. The paten has a similar band of hatched ornament and has the date 1574 which is consistent with the date of manufacture. Total weight 188 grams, 6 troy ounces. Height 15 cms (cup), 18 cms (with top). Diameter of top 9.4 cms. Extremely good silver marks for London 1573. Makers mark “IP” (Jacksons page 95) a known maker of communion cups between 1565-79. *It’s very rare for marks of this period to have a name associated with it. Normally all that remains on the record is the initials.

Signed – *There are no precise records of silver makers marks prior to 1681 as all records were destroyed in the fire at Goldsmiths Hall in that year when the Assay Office and apartments of the Assayer and Clerk in the south west wing of the building were burned down.

Most parish churches in existence at this date would have had a chalice very similar to this. During the Reformation there was a return to a simpler, more direct form of worship. Protestants rejected the Roman Catholic belief in ‘transubstantiation’, the transformation of bread and wine during the Mass into the body and blood of Christ, and proposed instead a symbolic service of shared communion. In this, the congregation would regularly take wine as well as bread, whereas before they had been chiefly spectators.

The church authorities launched a programme from about 1560 to replace the ‘old massing chalices’ with ‘decent’ communion cups of prescribed design, such as this. The programme for refashioning old chalices was staggered from diocese to diocese over a period of about 15 years. The large and remote Welsh diocese of St David’s was one of the last to adopt the new form of communion cup.

This lovely antique communion cup is in very good condition with no damage. Stamped on the rim of the cup and on the paten with a full set of matching English silver hallmarks, foot unmarked. Excellent patina. Traces of a possible old repair on the stem.