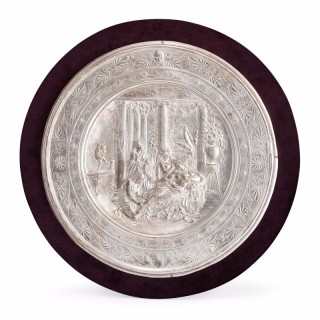 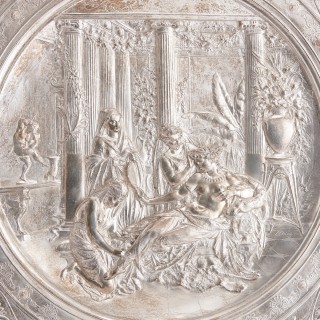 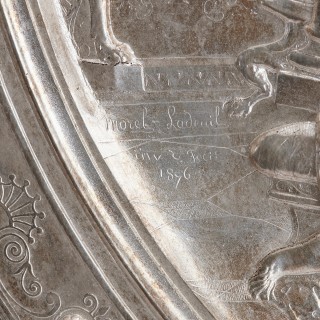 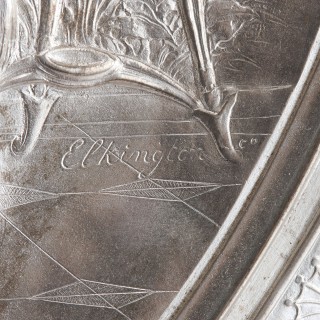 Of circular form in the Neo-Grec manner, depicting a classical figural scene of a semi-clad maiden surrounded by three female attendants with an exotic colonnaded interior, within a florally decorated border with a Grotesque bust to the top and two dragons to the bottom, signed and dated to the lower left ‘morel-ladeuil / inv e fecit / 1876’ and to the lower right ‘Elkington & Co.’

The importance of this Victorian period silver plated charger resides in its Classically inspired narrative, which exhibits exquisite detailing. This model of charger was designed and conceived in silver by Morel-Ladeuil for the 1876 Philadelphia Exhibtion where the plaque received high praise and was described as ‘Tadema in silver’, but its current whereabouts are unknown. Versions of this plaque also form part of the collections of The National Museum of Scotland (A.1878.21.2), The Victoria and Albert Museum (M.221-2011), The Carnegie Museum of Art, Pittsburgh and The New Orleans Museum of Art. The catalogue entry for the version of the plaque held in the Corcoran Gallery of Art in Washington was recorded in the 1873 catalogue prepared by the curator William Macleod as ‘From the original work, designed and hammered out in silver, with damascened tracery in gold and silver, by M.Ladeuil, who was two years engaged in its execution with his own hand, for the Centennial Exhibition. It was valued at $7500. For Classical conception and exquisite workmanship, it is pronounced unrivalled. In a court surrounded by garlanded Ionic columns, vases of flowers etc a Pompeiian lady, just from the bath, reclines demi-nude on her couch, while her handmaidens perform her toilet. One ties on her sandal, another binds her locks with a chain, and a third stand ready with a robe to shroud the still unveiled charms of her mistress, who seemingly surveys herself in a metal mirror. Besides the general grace of forms, the faces are full of expression.’