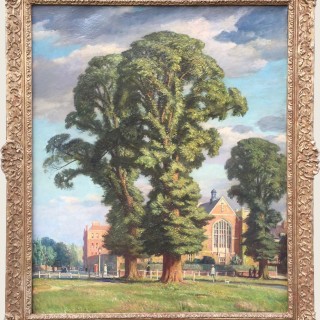 This painting is a frustration. Tantalisingly called Elms in the Suburbs by the artist I have spent many a fruitless hour online scrolling through old photographs of schools, churches and convents in an attempt to positively identify it. Best suggestion so far is Dulwich Prep but I’m sceptical. Any suggestions?

The artist, Francis Dodd had mentored Henry Lamb in the early years of the 20th century. In turn Lamb introduced him to the sisters Vanessa Bell and Virginia Woolf, Dodd’s portrait of Virginia now hangs in the National Portrait Gallery, London. He enjoyed a successful commercial career, respected as a fine draughtsman and etcher, ending up as a trustee of the Tate Gallery in the 1930s.

Born in Anglesey, the son of a Wesleyan minister, Dodd trained at the Glasgow School of Art alongside Sir Muirhead Bone who married Dodd’s sister. While at Glasgow, Dodd won the Haldane Scholarship in 1893 allowing him to travel around France, Italy and Spain, returning to England in 1895. After a period working and teaching in Manchester he moved to Blackheath, London in 1904 and in 1916 was appointed an official war artist by the War Propaganda Bureau who sent him to the Western Front to paint a collection of portraits later published as ‘Generals of the British Army’ soon followed up by ‘Admirals of the British Navy’. In peacetime he worked as a curator at the Tate becoming a trustee in 1929, a position he held for the next six years. His portrait of Virginia Woolf is amongst many of his works held at the National Portrait Gallery. The Imperial War Museum, the British Museum and the Walker Art Gallery in Liverpool all hold his work.