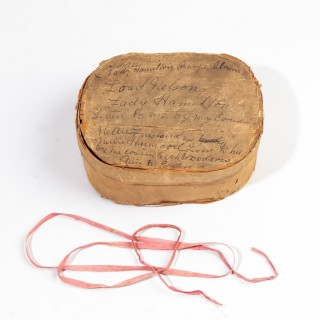 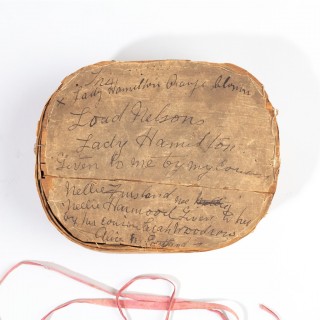 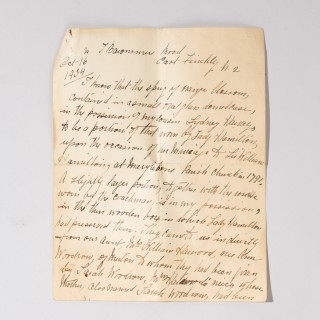 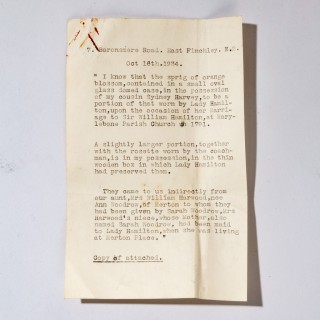 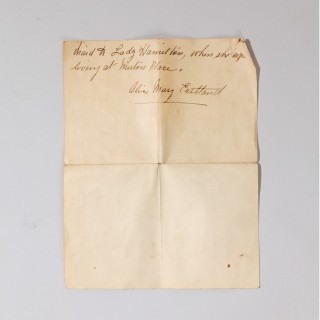 This charming keepsake comprises an oval paper lined wooden box and lid, formally a pill or pantry box, held together with a pink ribbon, inscribed on the lid The Lady Hamilton’s Orange blossom. Lord Nelsons. Lady Hamilton. Given to me by my cousin Nellies husband, nee Nellie Harwood. Given to her by her cousin Sarah Woodrow. Alice M. Eastwood. In a domed glass case with later fabric wedding favours. With a letter of further provenance dated 1834 and three later wedding favours circa 1840. English, circa 1795.

“I know that the sprig of orange blossom, contained in a small oval glass domed case, in the possession of my cousin Sydney Harvey, to be a portion of that worn by Lady Hamilton, upon the occasion of her Marriage to Sir William Hamilton, at Marylebone Parish Church in 1791. A slightly larger portion, together with the rosette worn by the coach man, is in my possession, in the thin wooden box in which Lady Hamilton had preserved them. They came to us indirectly from our aunt, Mrs William Harwood, nee Ann Woodrow, of Merton to whom they had been given by Sarah Woodrow, Mrs Harwood’s niece, whose mother, also named Sarah Woodrow, had been maid to Lady Hamilton, when she was living at Merton Place.”

This box reputedly contained the orange blossom worn by Emma Hart when she married Sir William Hamilton at St Marylebone Church, London on 6 September 1791. It was preserved by a servant called Sarah Troy, (1791-1859) who married Thomas Woodrow, a book binder, in 1810. Thence by descent to her daughter Sarah Woodrow (born 1816) then to her cousin Eliza (Nellie) Harwood (nee Woodrow, born 1835) then, by 1934 to Alice Eastwood. Probably in Victorian times the original blossom was replaced by artificial flowers. We are indebted to Martyn Downer for his research into this piece.