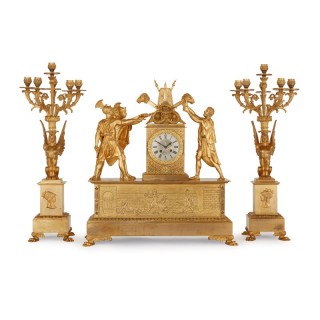 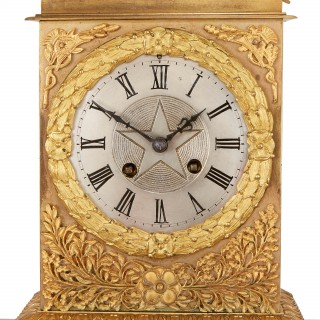 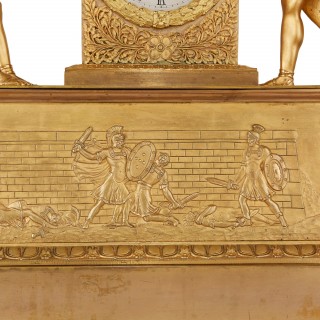 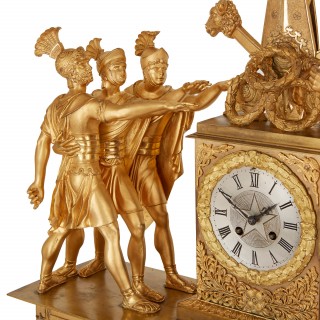 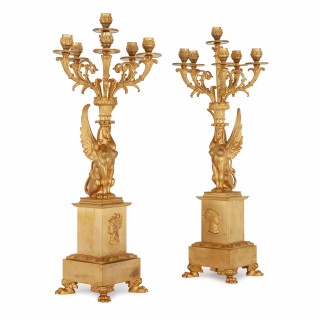 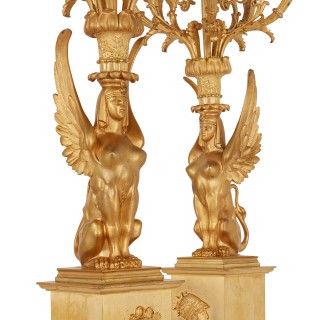 Three piece set comprising a central clock and a pair of flanking six-light candelabra; the clock decorated with a silvered dial surmounted by decorations of ram’s heads, garlands of flowers and spears, and flanked either side by four fully modelled figures; to the right is the father, and to the left his three sons swearing an oath, all set on a rectangular plinth decorated with a panel, on lions paw feet; the pair of flanking six light candelabra similarly decorated and with Egyptian Revival sphinx

The design of the clock case is widely acknowledged to be inspired by one of the most important paintings of French Revolution, ‘The Oath of the Horatii’ by Jacques-Louis David (France, 1748-1825). The clock depicts the sacrificial oath taken by the three Horatii brothers, who legendarily promised to fight the rival Curiatii brothers on behalf of the city of Rome. Figures of the Horatii brothers stand on the work’s left hand side, and face their father on the opposite right of the piece. As they raise their right hands in a gesture of patriotic and familial piety, the clock’s decoration immortalises the Horatii as the embodiment of ancient Roman valour.

The silver clock-face itself is surrounded by intricate floral design, and surmounted by images connoting natural abundance and sacrificial honour. Garlands, weaponry, and rams’ heads combine to create a striking image of religious devotion and military resilience. The rectangular plinth on which the clock stands is decorated with a plaque, which illustrates the sole surviving Horatii brother on the precipice of triumph. Surrounded by his dying brothers, the standing figure brandishes his sword and prepares to slay his final Curiatii foe. Bestial inspired paws hold the plinth off the ground; references to mythology and animals are further reflected in the candelabra, which are decorated and with Egyptian Revival sphinx.