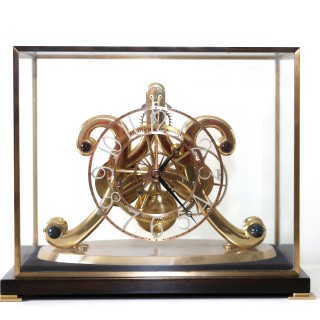 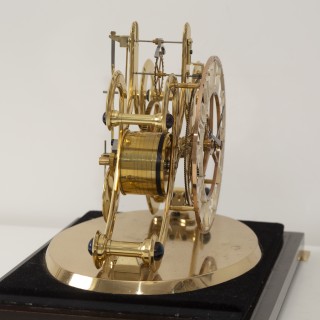 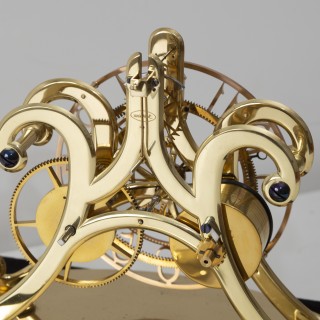 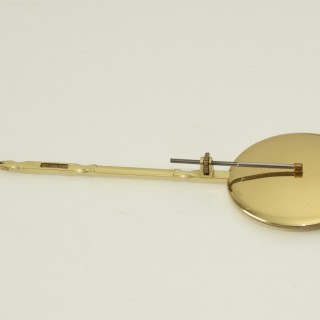 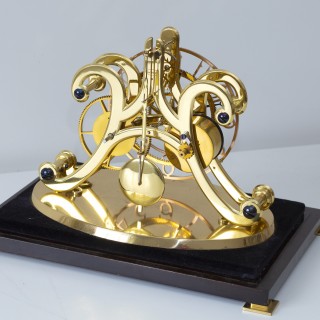 During the 1970s, Dent of London worked in collaboration with the exceptionally talented Fred Whitlock in faithfully reproducing technically ingenious skeleton clocks from the past – this English skeleton clock with sun and planets gearing, a triple-weight French skeleton clock and one (the design inspired by the Concorde aeroplane) with rementoire winding.  As with many designs produced by Fred Whitlock and others for Dent in this period, the quality of both the engineering and finish are exceptional.

Between November of 1973 and February 1974, Dent of London produced this reproduction of a design by William Strutt of Derby from the late 1820s, and produced then in small numbers by his friend and similarly gifted engineer, William Wigston. The original production ran to only 20 pieces due to the excessive cost. Dent’s 1970s production was limited to a run of 100 pieces.

The clock features epicyclic gearing, also referred to as ‘sun and planets’ gearing. Mounted on the central arbor is a large ring with both internal and external teeth. This one wheel gears up the escape wheel, and gears down the hour wheel. A full explanation of epicyclic gearing and this clock in particular is given on pages 99-101 of F.B. Royer-Collards book, SKELETON CLOCKS.

The C-scroll brass frame is beautifully finished with soft bevelled edges, the pillars secured with massive blued screws. The pendulum bob is similarly beautfully profiled, all giving this clock a very elegant feel. The top of the frame is signed by Fred Whitlock to the rear.

The open brass dial has silvered Arabic numerals and engraved outer minute dots. The substantial blued black steel hands stand out against the silver numerals. This design of dial was also adopted by Benjamin Parker and John Pace for their C-scroll skeleton clock.

The frame is raised on a tapered oval brass plinth, on a velvet-covered wooden base beneath a glazed brass-bordered case.

The clock is rear-wound in true likeness to Strutt’s original design.

To be overhauled and guaranteed for 3 years. The price also includes delivery and set-up within the mainland UK. Please contact us to quote for delivery worldwide.