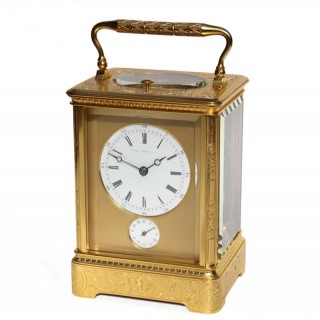 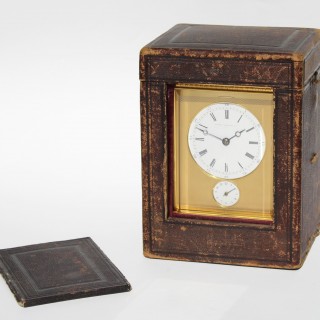 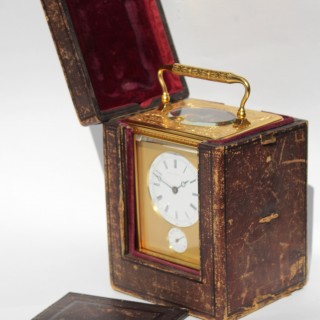 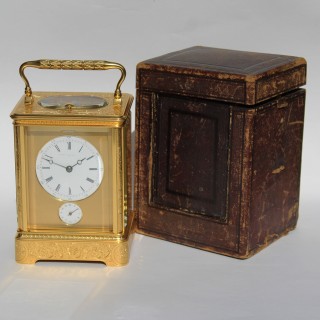 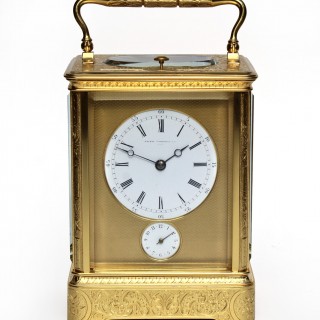 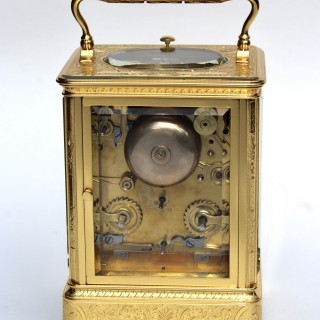 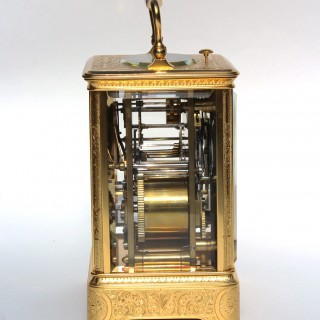 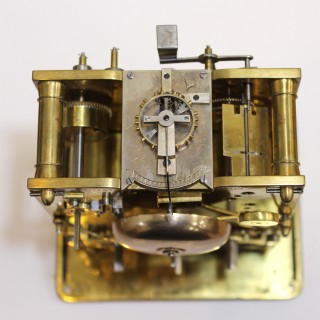 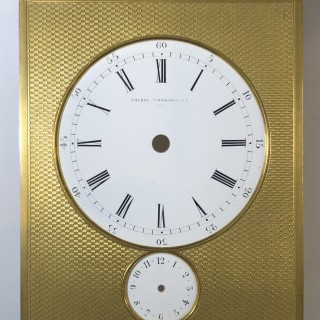 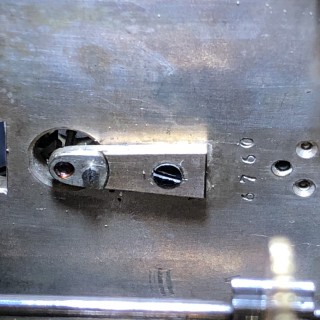 A giant French carriage clock in an engraved corniche style case, repeat striking on a bell and with an alarm function. The clock is complete with its original Morocco leather carrying case.
The giant sized case is newly regilded. It is very nicely engraved, and the dials sit behind an engine-turned gilt mask.

The bell-striking 8-day movement has an alarm function, and repeats on depressing a button on the top of the case. The movement has a large oversized platform stamped on the underside with its serial number 6760.There are aspects of this movement which elevate it above and beyond those that we normally see. In particular, I have not seen another French carriage clocks with plates as thick as these. It is more similar in nature to the plates found in a good quality English fusee carriage clock. Other design features lead us to believe that this particular movement was a limited production run, made in very small numbers. Hence the elevation in quality all round.

The clock is indistinctly stamped with H.L. on the frontplate, mis-stamped on an angle so that only the shadow of the H is visible. The clock is numbered throughout 6536 – the backplate, frontplate, dial plate are all stamped with this number. In the early days of Paris carriage clock mass production, H.L. (Hollinge) were the clockmakers that supplied ‘blanc roulant’ movements to many of the esteemed French carriage clock makers – Drocourt, Henri Jacot, Leroy, to name but a few.
The perfect white enamel dial has a slightly rubbed signature for the original retailer Mackay Cunningham & Co., a jewellers in Edinburgh, the partnership formed by James Mackay & David Cunningham in c.1856. It was taken over by James Hardy & Co Ltd circa 1912.

The rear of the dial bears the serial number and is signed AM for Adolphe Mojon, a common signature for H.L. dials.
Very delicate moon hands, unusual for this size of carriage clock.

The clock’s serial number leads us to believe that this clock dates from the early 1870s, just prior to the H.L. workshops being taken over by Drocourt. We know from Leigh Extence’s extensive research that Drocourt bought ‘a small factory’ from Albert Hollinge (HL) in circa 1875 or 1876, and minor changes were made to the production.

This clock is very similar in all respects to another giant corniche engraved carriage clock by H.L. , serial No: 6296, made for Drocourt. The backplate is set out identically, with the same barrel bridge and the identical platform (that one bearing a serial number 6737, very close to this clock’s).

Whilst number 6296 has curved crossings to the wheel work, this number 6536 has straight crossing-out to the spokes of the wheelwork as used by Drocourt post-H.L.. It was clearly made just at the cusp of H.L.’s change in wheel work design and Drocourt’s takeover.
The clock movement will be overhauled and guaranteed for 3 years.